NEW BRUNSWICK, NJ–For much of the past two years, the city government has been misleading the public about how frequently its so-called “Board of Ethics” has been meeting in public.

A person visiting the city’s website would assume the six-member board met once every three months, presumably working towards a more ethical city government.

But a New Brunswick Today investigation found that the board members quietly stopped having quarterly public meetings in February 2013, while continuing to advertise them.

The board was also caught off-guard after an ethics complaint filed by the author of this article became the first in more than two decades to result in a formal hearing.

On August 14, this reporter attempted to attend the advertised meeting of the board and file a complaint regarding the city’s Planning Board attorney, who is also employed by Rutgers University, a frequent applicant before that board.

But the doors to City Hall were locked.

The incident fit a pattern of several of the city’s lesser-known boards and commissions advertising meetings on the city’s website that are, in reality, never held.

For instance, despite New Brunswick Today’s article in 2012, the official city website still indictates falsely that the Emergency Management Council “[meets the] second Wednesday of the month at Fire Headquarters at 10:00 a.m.”

The proceedings where Planning Board Attorney Benjamin Bucca was finally forced to defend himself in January represented the culmination of a series of successful efforts to force the city’s Ethics Board into action after it went more than five years without receiving a complaint, and more than twenty years without holding a formal hearing.

But they also represented city government at its worst in many ways.

At first, the board had attempted to quickly move ahead with a hearing in October, but both sides objected on the grounds it did not give the accused the required 30 days to prepare a response, in accordance with the board’s four-page “operating procedures.”

Mayor James Cahill also appointed two new members to the Ethics Board, including one who failed to show up for most of the meetings.

Rev. Joseph Hooper was never sworn in after his appointment in September 2014.  At the time, City Council members who approved the appointment could not say anything about the man besides the fact that he had been appointed by the Mayor.

Despite living just over one block away from City Hall, Hooper missed half of the meetings that have been held since he joined the board, showed up half an hour late for another, and was not present for its only significant vote.

After the board voted to find Bucca not guilty of violating the city’s Code of Ethics with only four of its members present, this reporter called out Hooper, who works as a preacher at St. Paul AME Church in East Orange.

“Please don’t criticize members of the board that are not present to defend themselves,” said Anthony Vignuolo, an attorney hired by the board after their usual attorney, Bucca’s boss William Hamilton, recommended they hire him. 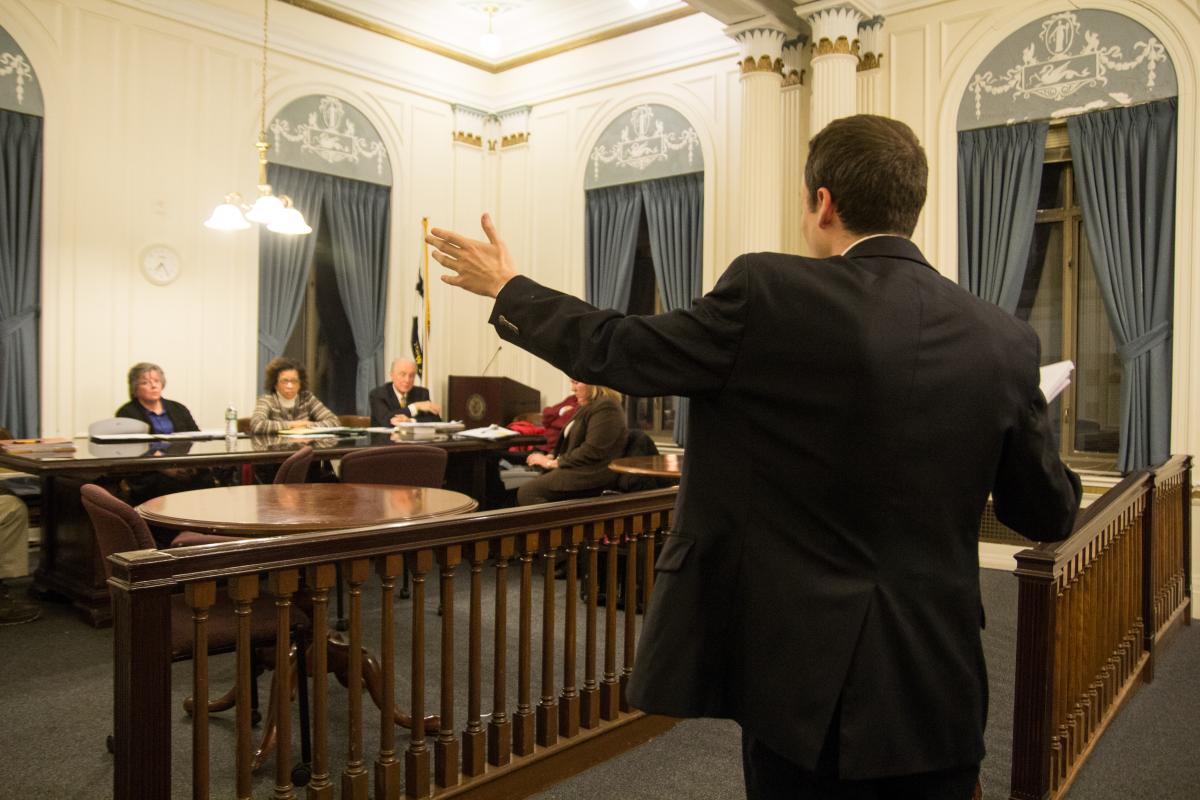 New Brunswick Today could not help but ask “What kind of Ethics Board is this?” after the board said it was not appropriate to criticize Hooper for not showing up to the board’s only significant vote in more than 20 years.

“It’s an ethics board that’s functioning to the best of their ability,” responded Reverend Lauren Carrington, a preacher at the Ebeneezer Baptist Church in New Brunswick who reluctantly accepted the job of Ethics Board Chair on the condition she could leave the position after the historic hearing.

Carrington and the other board members deferred virtually all of their power to Vignuolo, who repeatedly misinterpreted the board’s operating procedures, interrupted witnesses, and rejected evidence .

Vigunolo made a number of additional errors, including mis-stating the number of votes required for Bucca to be found guilty, failing to solicit written questions from the public, and denying the author of this article the opportunity to object to violations of the procedures.

But the most egregious error was that the board made little or no effort to record what took place during the historic hearing.

The hearing was supposed to be recorded or transcribed “verbatim” by a court reporter, according to the board’s own procedures.

“Its public hearings shall be recorded verbatim either by a CSR [certified shorthand reporter] or by an approved tape transcription device operated by a qualified operator,” reads the procedures.

But neither were present for the hearing, and Vignuolo falsely claimed there was an audio recording made.

“There was no stenographic reporter present… There was a tape recording recording device that was here,” said Vignuolo. “I don’t know the location of that tape or the recording that was made.”

“There was a recording device in the courtroom which you asked for in advance,” Vignuolo told this reporter, again mis-stating the facts.  This reporter had, in fact, asked for a sound system to play audio recordings as evidence.

“It’s the same recording device that is used for Council meetings and the Planning Board meetings,” said Vignuolo.  “What the status of that recording device is, where it records in this building, I don’t know the answer.”

“It was recorded to the best of our ability through the audio system that’s in this building.”

But absolutely none of that was true, and Hamilton, the city government’s “special counsel,” evenutally admitted as much under questioning at a City Council meeting earlier last month.

“It’s my understanding that Mr. Kratovil had someone there taking pictures of the whole scene,” said Hamilton.  “It would have been better to have a [court] reporter in all probability.”

Mayor Cahill’s spokesperson did not respond to several questions about the numerous errors made by the board and its attorney during the January hearings.

Despite the case already being decided, with a 4-0 decision that Bucca was not guilty rendered on January 29, the saga is far from over. In an ironic twist, after failing to properly document its own hearings, the Ethics Board has abused its subpoena power in an attempt to force New Brunswick Today to turn over its videos of the hearing, and also prevent us from releasing those videos to the public.

“We are happy to share our materials if it in some way it helps the Ethics Board in their case against Benjamin Bucca, but to be commanded to do so through a subpoena is a violation of the NJ Shield Law, which protects a reporters’ sources and the information they obtain,” said Sean Monahan, who videotaped the January 15 meeting and is the publisher and co-founder of New Brunswick Today.

“As such we are forced to say no on principle,” Monahan said.

The emailed subpoena was received by this reporter on February 25.  Among other commands, it orders us not to release any video or audio recordings of the January 15 hearing, and the January 29 meeting where the Ethics Board announced its decision.

“THE SUBPOENAED EVIDENCE SHALL NOT BE REPRODUCED OR RELEASED UNTIL THE DATE SPECIFIED HEREIN,” reads the document.

The subpoena also compels this reporter to attend a March 5 meeting of the board and to testify, as well as hand over “any audio and video recordings made in any recorded format of the proceedings held… on January 15 and 29”

As this is a clear infringment on the freedom of the press, New Brunswick Today will instead release a series of videos containing the most important moments from the hearings throughout this week.

“I encourage the Board to drop the subpoena and pick up the telephone,” Monahan said. “I am sure we can work something out when the issue is approached from a place of mutual respect.”

Joshua Lurie, an attorney with the Montclair-based law firm Furst & Lurie, LLP, wrote a letter on behalf of this newspaper calling the subpoena “unconstitutional and unlawful.”

“This ‘subpoena’ is an  illegal and unconstitutional attempt to breach the Sheild Law and contains a prior restraint on the Freedom of the Press,” reads the letter.

Carrington did not return a message left in person at her place of work, the Tiny Tots daycare center on Lee Avenue.

It’s not clear if Carrington was aware of the subpoena as the signature on it is not authentic.  Rather, it is simply her name in a cursive font.

City spokesperson Jennifer Bradshaw, was also unaware respond to a question about the subpoena until New Brunswick Today brought it to her attention.

“It was confirmed to me that a subpoena was issued by the office of the ethics board attorney regarding a recording in your possession of a past ethics board meeting,” said Bradshaw.  “I don’t have much more information beyond that, other than what you told me… I’m not definite on what the issue is regarding this recording.”

With the board’s track record of failing to show for its own meetings, New Brunswick Today wonders if the board’s own members will be subpoenaed to ensure their attendance at the March 5 meeting.

Yet again, without explanation, the Ethics Board failed to show for its most recent advertised meeting on February 12, not even posting a notice on the door of City Hall that the meeting would be cancelled.

The meeting has been rescheduled for March 5 at 7pm on the top floor of City Hall, located at 78 Bayard St.  The meeting is open to the public and New Brunswick Today encourages our supporters to attend.