NEW BRUNSWICK, NJ–The Middlesex County Board of Chosen Freeholders may have violated the Open Public Meetings Act when they held an unusually short and possibly unlawful conference meeting March 2.

During the seven-minute meeting, the only actual piece of business discussed was a very quick presentation about a questionable open space acquisition.

That land deal raised many questions for possibly being a waste of open space trust fund dollars, spent on potentially contaminated undevelopable land, owned by a highly-connected retired judge and Democratic Party insider.

The meeting was called to order at 6:00 pm, and in less then a minute, Wilentz, Goldman, & Spitzer Chairman John A. Hoffman, Esq. began an almost three-minute presentation on the purchase.

After Hoffman was done, the Freeholders breezed through the pages of the agenda without commenting, and then Freeholder Director Ronald Rios asked if any Freeholders had any questions about anything.

There being none, the Clerk of the Board read a Resolution to exclude the public from the meeting and go into a private, “executive session.”

The law requires the public body to state the exception in the statute that allows the exclusion of the public and they must also state with specificity what they are discussing.

Basically, they have to announce just enough for the public to know that what they are talking about, but not enough to violate a privilege or confidentiality.

For a long time, public bodies had a habit of just reading the 9 exemptions as a blanket statement.

A 2007 decision in a Middlesex County case brought by John Paff, a well-known open-government advocate and the Chair of the New Jersey Libertarian Party’s Open Government Advocacy Project, requires public bodies to state with as much specificity as possible what they will be discussing.

The resolution to go into closed session was read at 6:07 pm and voted upon unanimously. The law prohibits discussion on matters other than stated in the Resolution, and the Hoffman land deal was not listed as a subject of discussion.

Normally at this point, the members of the public body would get up and adjourn to a conference room or private office, conduct their business and come out after.

They are then required to reopen the meeting in front of the public and finish any other business on the agenda or vote to adjourn.

Instead, after saying they were going into closed session, Rios called for the meeting to be adjourned, and announced that it was so adjourned at 6:08 pm.

Confused, New Brunswick Today asked Clerk of the Board Margaret E. Pemberton for clarification.  She advised that Rios had in fact adjourned the entire meeting, not just adjourning to go into closed session.

The Freeholders were not going to be coming back out, and the public was expected to leave. The cameraman began disassembling his equipment for the night.

New Brunswick Today questioned whether that was legal. Pemberton stated that she didn’t know if it was illegal or not, but the Freeholders do it all the time.

Hoffman and several others also went into the conference room with the Freeholders. As New Brunswick Today concluded note-taking and speaking to others who were similarly confused, Hoffman came out at 6:17 pm. 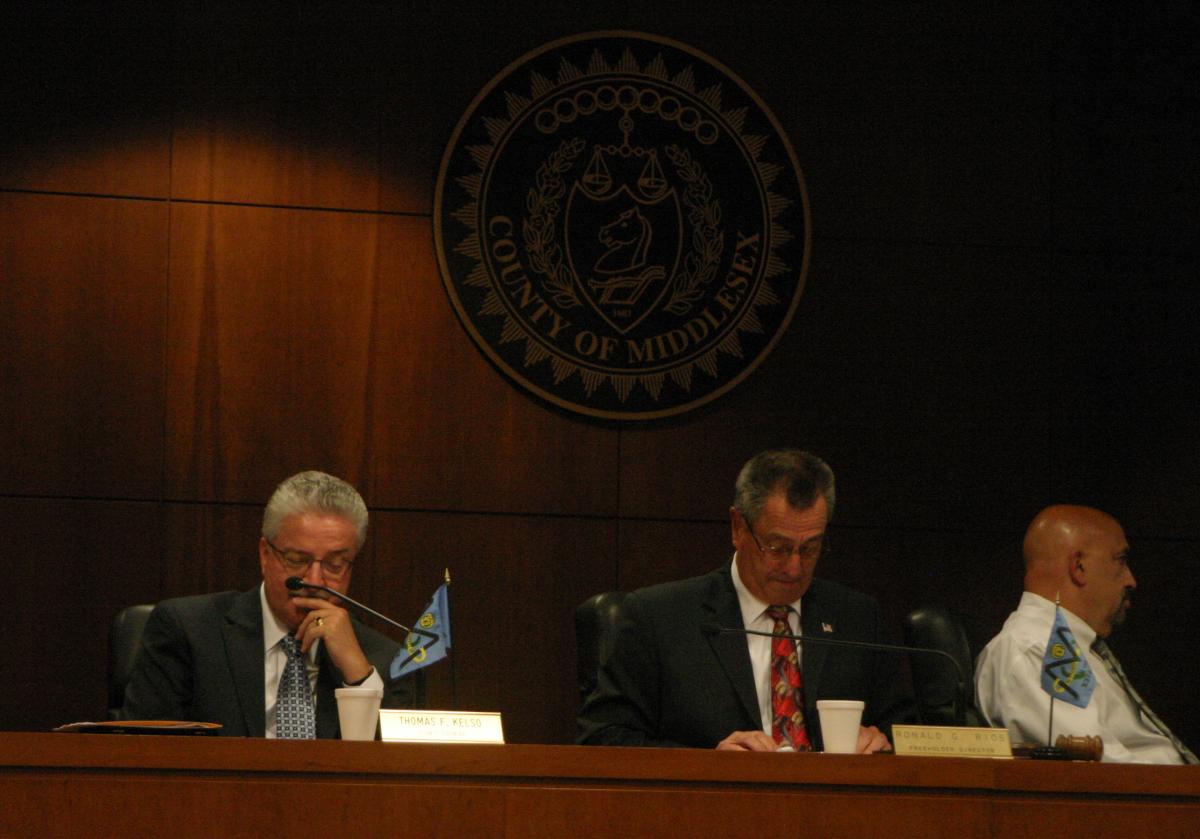 Attempts to speak to Rios and county attorney Thomas Kelso, Esq. were denied. A clerk at the county counsel’s office said that assistant county counsel Jeanne-Marie Scollo, Esq. would contact New Brunswick Today, but no one followed up.

New Brunswick Today spoke to an attorney at the Department of Community Affairs (DCA), who stated that while the action was technically not against the law, they imagine it happens often. The attorney advised that the DCA has no authority to enforce the Sunshine Law.

“My thought is that what they’re doing is improper,” Paff said.

Contrary to what the DCA attorney stated, Paff said that, in his experience attending public meetings, “I’ve never heard of them doing that.”

Paff quickly followed up and stated, “I hear violations of the OPMA all the time.”

Paff explained how executive sessions are subordinate to the public meeting, saying, “Executive session is a component of a meeting. It’s not a separate meeting.”

Even if the public body is going to come out of the closed session and reo-pen the meeting only to immediately adjourn, that is something they have to do in the presence of the public.

According to Paff, the public has the right to attend the meeting gavel to gavel.

But once the final gavel comes down, the public body can no longer meet.

Therefore, holding a closed session after the meeting has adjourned makes the executive session an unlawful meeting.

New Brunswick Today did some research on this and found that the New Jersey Press Association (NJPA) seems to have addressed this issue in 2001.

The explanation provided is that “every public session must be open to the [public] and the body cannot avoid the Open Public Meetings Act by failing to notify the public that the session has been re-opened after executive session.”

It seems clear that the public cannot be notified the executive session has ended if they are locked out of the building.