NEW BRUNSWICK, NJ—Once upon a time, New Brunswick, like most other cities in the United States, boasted an extensive streetcar system.

Streetcars, also known as trams or trolleys, are powered by electricity, and run on tracks laid out across the roads themselves.

Walking through New Brunswick today, one can often see the thick, steady stream of automobiles and buses, filing through its narrow streets and clogging small and large arteries such as US Highway 1, and State Routes 18 and 27.

The daily traffic and congestion are often thought of as a necessary inconvenience that comes with living in a city.  But the transportation problems of today are vastly different from the problems New Brunswickers faced in years past.

In the early part of the 20th century, the city hosted an array of local, independent trolley lines, earning the nickname “Hub City.”

New Brunswick’s trolleys fell under the Central Jersey Division, along with those that served Elizabeth, Perth Amboy and Plainfield. 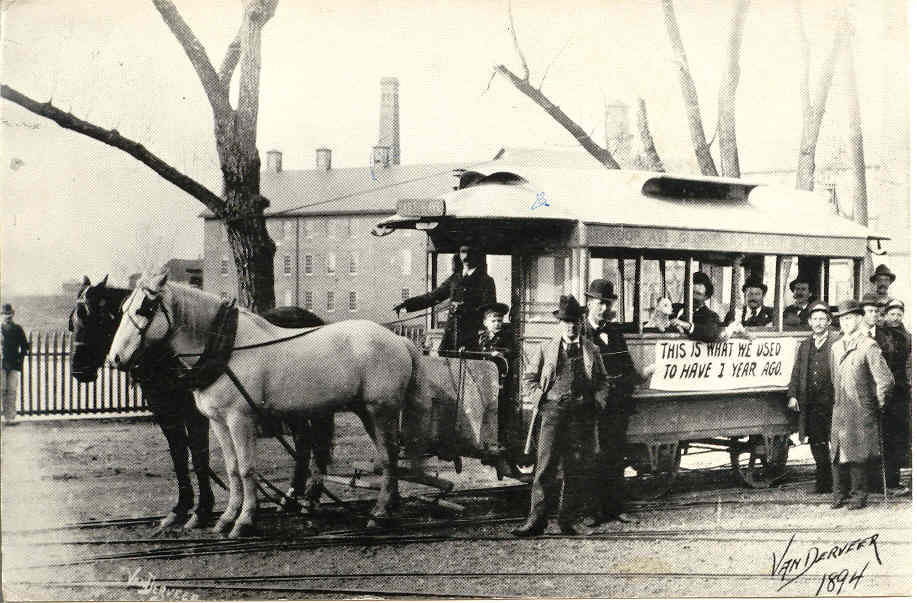 One of the most notable routes in Central Jersey was the Middlesex Car Line, which first began in 1867 with the formation of the New Brunswick City Railroad Company as a line for horse-drawn streetcars.

A bill passed through the state legislature in February of that year made it that the route existed on paper, but it was not until 1886 that the project became a reality.

The line would change ownership several times before closing for good in the late 1920’s.

By October of the same year, the New Brunswick City Railroad Company boasted a fleet of five cars and 23 horses.

But the company, unable to keep up with transportation modernization, was purchased by the Brunswick Traction Company in 1895. The lines were electrified, and extended to nearby Milltown.

In 1897, the line would be further expanded to include routes to Metuchen, Piscataway and Highland Park.

A year later, a line was laid down that would travel out of New Brunswick, then cross the Raritan to the river’s north bank before heading to the small villages of Bound Brook, Somerville and Raritan. 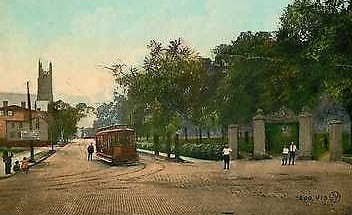 They would in turn, purchase the small nearby Perth Amboy Railroad Company.

Middlesex & Somerset merged into the Elizabeth & Raritan Street Railway Company, which gave the lease on the Middlesex Car Line to the Public Service Corporation of New Jersey (PSC) in 1904.

Originally, there were two seperate lines from New Brunswick to Perth Amboy, with a layover in Metuchen. When the Public Service Corporation took over the route in 1904, the two lines were merged together.

The 13.5 mile route became the Perth Amboy Line that year, before operations of the line were assigned to a subdivision company known as the United Street Railway Company of Central Jersey.

The line would cease operations in two years later.

A MIX OF SUCCESSES AND FAILURES 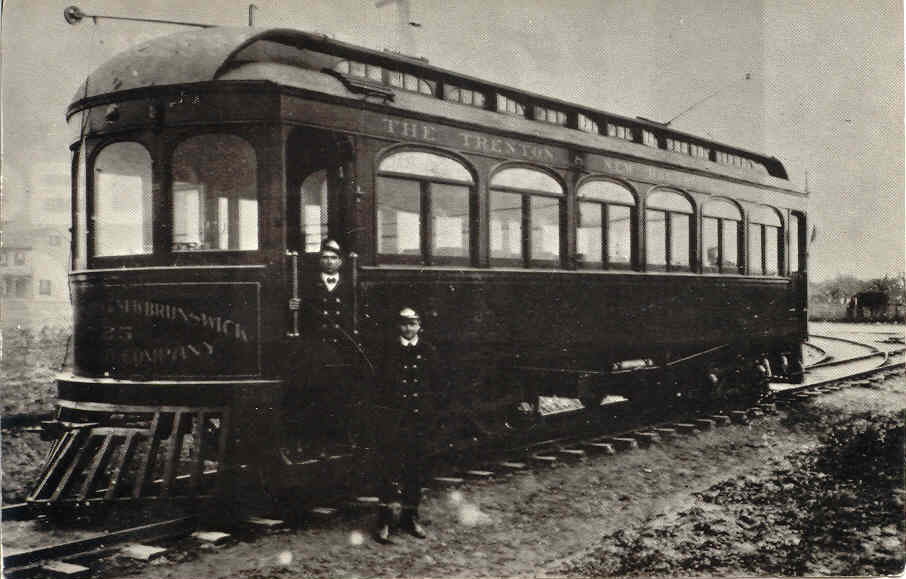 The Public Service Railway Company ran a number of routes through New Brunswick and used a storage building on Sanford Street to house the streetcars when they were not in use.

Among the lines that were once owned by PSC was the Easton Car Line, which like the Middlesex Car Line, was a result of failed business adventures by previous regional transportation companies.

The line was originally operated by the New Brunswick City Railroad, until its foreclosure in 1890.

Between 1890 and 1900, the line was operated by the New Brunswick City Railway Company, which electified the route and trolley cars.

Like many Central Jersey lines, ownership was passed to the Middlesex & Somerset Traction Company, and later to the PSC.

The double-tracked line began at the corner of Huntington Street and Easton Avenue, and headed to Albany and George Streets, before traversing Throop Avenue, and eventually Commercial Avenue, which ended at a massive railyard near the border with North Brunswick.

Two cars were assigned to the line when it was taken over by PSC in 1907, each car taking 15 minutes for a one-way trip from end to end.

A third car would appear in 1921, but  by the time the route closed in the 1931, its operators had substantially reduced the frequency of trolleys.

There was also the short-lived Highland Park Car Line, which began at the intersection of French and Suydam Streets, running up Somerset Street to Easton Avenue, and then crossing the Raritan River via Albany Street.

Launched in 1925, the line saw limited success, and so its number of cars were reduced.

Low ridership stemmed from the fact that the line tried to connect downtown New Brunswick with Highland Park.  Ultimately, the small village had no need for such a route at that time.

Some other smaller routes, such as the Codwise Car Line and the Burnett Car Line, saw brief episodes of success.

The Codwise line was an offshoot of the Milddesex Car Line, and could take an individual from Sanford Street to the end of Commercial Avenue.

The Burnett Car Line was designed to serve the docks, wharves and warehouses that made up the market district of New Brunswick.

Instead, low ridership ended up killing the route in 1922.

Today, Burnett Street has largely been replaced by Route 18, which runs parallel to the Raritan River. 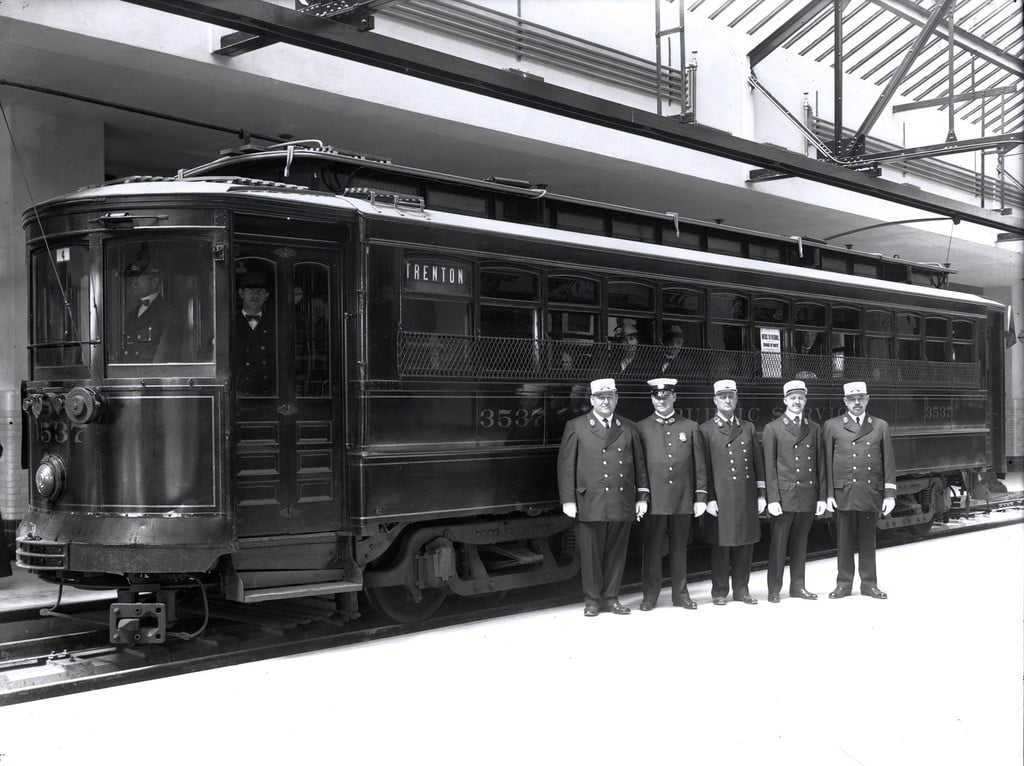 Perhaps one of the largest projects undertaken by the PSC was the Newark-Trenton Fast Line.

The route was among the largest trolley lines in New Jersey, and represented an effort to mesh together the local feel of the streetcar with the long-distance travel between major cities.

The line had consisted of a number of smaller, short-distance lines.

Since many of the pre-existing rail lines had already been laid down, it was only a matter of connect these routes.

In 1902, construction was started to connect Milltown to Trenton. The line snaked through rural, undeveloped farmland.

The line ended up stretching 72 miles, and connecting Jersey City, Trenton, and many other points along the way including New Brunswick.  A round-trip could be completed in 11 hours, or 5.5 hours one way.

The first, historic trip between Jersey City and Trenton took place on November 2, 1903.  An eccentric entrepreneur by the name of Edward Radel, ran his own private trolley from Jersey City to Trenton.

Regular service would begin in May 1904.

However, 1908 saw the bankruptcies of four of the local companies that made up the route: the Short Line, Trenton, New Brunswick and Camden lines.

In 1912, the route was shortened to Elizabeth, with a newer version of the Fast Line opening in July 1913 and restoring service to Newark, the state’s largest city.   Passengers could buy a one-way ticket from Newark to Trenton for just 95 cents.

When passing through Milltown, Fast Line cars would utilize existing tracks on Main Street and Milltown Road in Milltown.

After the First World War ended in 1919, ridership dropped significantly, with this downward trend continuing into the 1920’s.

To cut costs, the Fast Line was split into a Trenton-New Brunswick and a New Brunswick-Newark route. Fares were lowered, and an experimetal rail-bus that could alternate between both routes was introduced.

By the mid-1930’s, the rail line only offerred three trips per day.

Unable to compete against the quicker rail lines of the Pennslyvania Railroad, as well as the onset of the automobile, the Newark-Trenton Fast Line would finally cease its operations on January 16, 1937.