NEW BRUNSWICK, NJ—Unlike the area of New Brunswick fortunate enough to be located near Rutgers University campuses, dangerous and serious crimes that occur outside of those areas do not typically result in official notifications to the public.

As we reported, authorities at the Rutgers University Police Department claim to issue campuswide alerts for all serious crimes in some parts of the city, but other neighborhoods don’t get the same treatment from the New Brunswick Police Department (NBPD).

In fact, the NBPD has released just one press statement in 2015, and though it addressed five different crimes, only two occurred in since January 1 and both remain unsolved, as far as the public knows.

This leaves newspapers like New Brunswick Today, and our popular Facebook page, as some of the best places to get information about public safety issues in the Hub City.

And it’s a two-way street, where residents can alert journalists about crime incidents that otherwise would not be publicized.

Such was the case on January 12, when a man posted to the page: “My dad just got mugged on French st. at gun point. Anyone around saw or know if this is something happening around?”

The man said the suspect broke into his father’s van on French Street near Seaman Street at approximately 7:30pm, and assaulted him inside the vehicle.  The victim was taken to the hospital and required stitches.

“Everything happened inside my dad’s van. They broke into his car and assaulted him inside,” said the son. 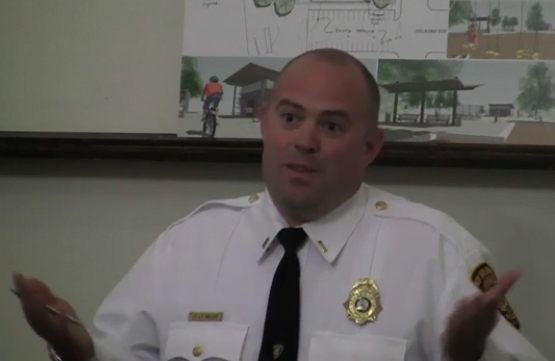 Captain JT Miller, who serves as the NBPD’s spokesperson, still has not responded to a request for information about this incident.

In fact, he has not responded to more than a dozen emails from NBToday since the New Year.

A review of police radio transmissions could not confirm the French Street incident.  But we did hear details of a different crime that occurred in another neighborhood around the same time.

At approximately 8:26pm that evening, police were dispatched to a victim of a strongarm robbery that occurred in front of 173 Rutgers Street.

“Caller was robbed by a [black] male and a Hispanic male unknown clothing description,” said a police dispatcher.  “He ran home and the suspects fled towards Livingston Avenue.”

Police who arrived on scene requested an ambulance for the victim who had sufferred some abrasions.

The NBPD spokesperson did not respond to a request for information about that incident either.

The City’s five-member City Council was notified of the police department’s nonresponsiveness to these inquiries, and Councilman John Anderson responded to New Brunswick Today directly.

“[Captain Miller] may be busy or feel it is not worthy of a response–Captain Miller can use his judgement,” wrote Anderson.

“We also speak to many people who feel that many of your questions/concerns are only for self promotion.”