NEW BRUNSWICK, NJ—A NYC-based pro-development website released a new rendering of a potential development that could replace the aging and abandoned Ferren Mall and parking garage in downtown.

The most recent rendering features a 1.7 million square foot complex, the highlights of which are two 300-foot towers that could surpass The Vue as the city’s tallest building.

But the complex, in its latest incarnation, would also take out seven smaller privately-owned buildings along Paterson Street, across from the Middlesex County Courthouse.

Real estate developer and investment company Jones Lang LaSalle (JLL) and the New Brunswick Development Corporation (DEVCO) struck a deal last year to design and work on development for the site of Ferren.

Previously, the New Brunswick Parking Authority (NBPA), which owns the enormous site, signed an exclusive 18-month agreement in April 2014 with DEVCO to market the possibility of redeveloping the prime real estate.

Dubbed “The Hub at New Brunswick Station” by DEVCO, the latest rendering of the project was made by Kohn Pederson Fox, according to the NewYorkYIMBY.com report.

It shows an aerial view of the proposed development, which dwarfs two nearby 12-story buildings, the Skyline Tower and NBPA’s Wellness Center.

The drawing shows the complex having taken over the entire block, replacing not just the NBPA-owned Ferren Mall, but also several privately-owned offices, a restaurant, and a barber shop along on Paterson Street. 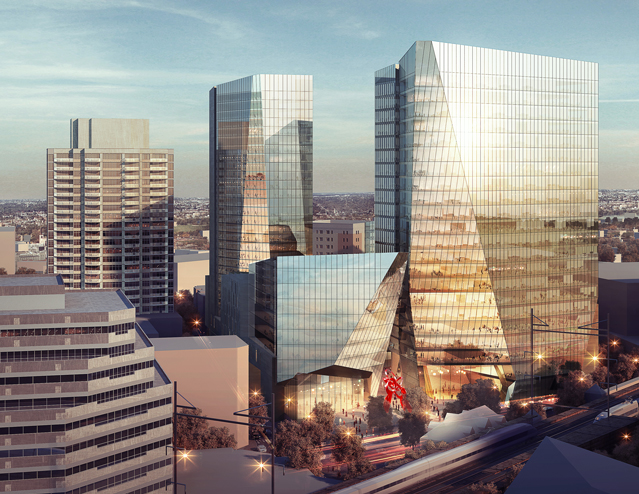 Previously released renderings did not show whether or not the complex would encroach all the way to Paterson Street.

DEVCO President Chris Paladino assured that relocation into the new development would be offered to the current commercial tenants on the block.

But the new drawing confirms the new structures would displace the seven low-rise structures.

“We would discuss potential relocation of office users back to the new project if they were interested in moving twice”.

Clydz martini bar and the Onyx barbership would both be offered the opportunity to relocate into the retail portion of the new establishment, according to Paladino.

The buildings they currently operate out of, like the other five buildings on the block, are still privately owned and not subject to eminent domain, which could complicate the developer’s plans.

At his “State of City” speech on January 2, Mayor James Cahill touted the plans for the site, treating the project as a foregone conclusion.

The Mayor said the project “will transform the Ferren Mall into a variety of retail, residential, dining, office and public spaces.”

“Given New Brunswick’s ability to maintain momentum even during difficult times while redevelopment has all but halted elsewhere, and with the completion of the Gateway project and Wellness Plaza, there is no better location in New Jersey today for prime development than the Ferren mall site,” said Cahill.

“The existing Ferren site is ripe for redevelopment with New Brunswick’s designation as a Transit Village and the availability of the State’s Urban Transit Hub Tax Credit financing program.”