NEW BRUNSWICK, NJ—The city’s school board typically meets in public just once each month, in the auditorium of the New Brunswick High School.

But this year will be a year of change for the district, as the last of its appointed members are faced with a decision to run for election or not, and the district seeks a new Superintendent, just their third in 35 years.

The Board of Education, as it is officially known, consists of nine volunteer members, each of whom live in New Brunswick.

Seven of the nine have been elected by voters, while two are the holdovers from the old system, having been appointed to office by Mayor James Cahill.

Voters narrowly decided to change the system from appointed to elected in November 2012.  But so far the candidates tied to Cahill’s political machine have been victorious each time.

The board is responsible for the local public school system, which serves about 10,000 children from Pre-K through the 12th Grade, and they also operate a school for adults to earn their graduation equivalency diploma (GED).

A school board’s most important decision is usually who they choose to be the district superintendent.

Superintendent Richard Kaplan has announced he will retire in June, forcing the district to search for someone to take over the unique and challenging job. 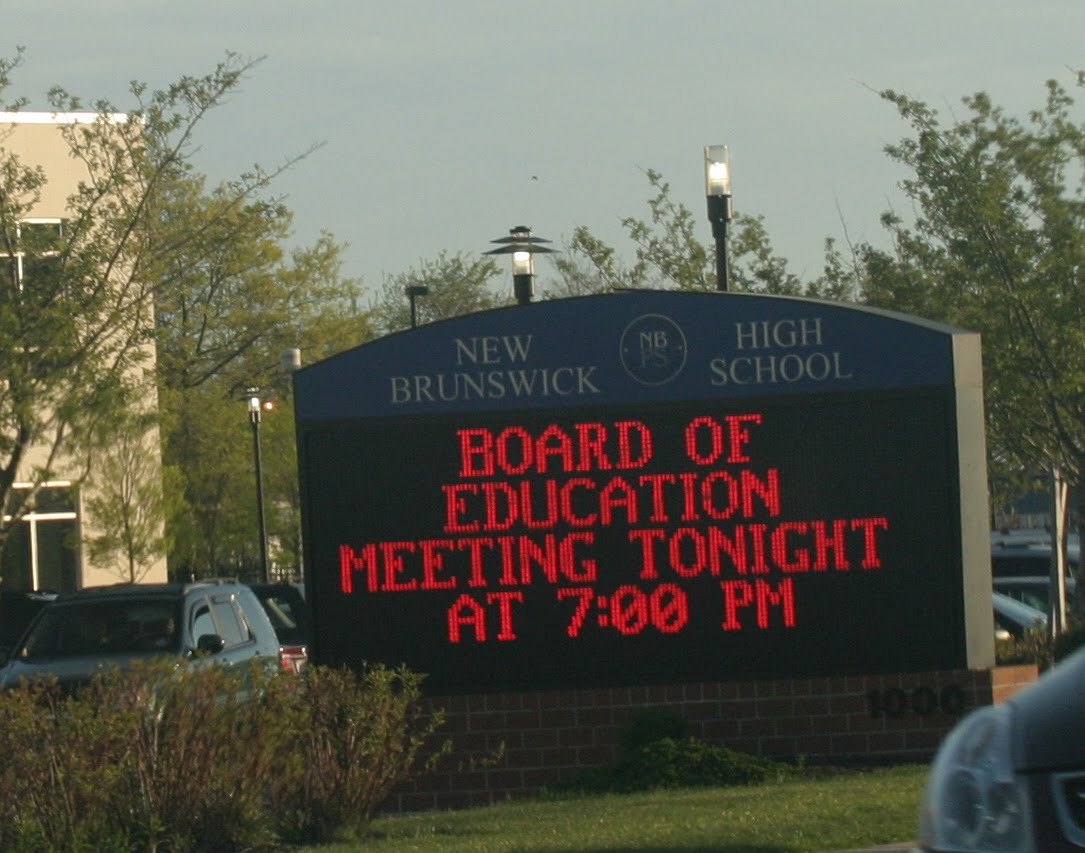 The board holds monthly public meetings on the third Tuesday of each month in the auditorium of New Brunswick High School, at 1000 Somerset Street.  In June, they hold an additional “close-out” meeting.

At each meeting, the board conducts business and adopts policies. Frequently, the meetings also include various artistic or musical performances by groups of schoolchildren and updates on programs and events.

Like other government bodies, the meetings are open to the public, and time is set aside for comments or questions from anyone wishes to speak.

Almost anyone is permitted to ask questions or make comments.

Former Board President Edward Spencer has previously denied individuals their right to speak at the meeting when they mentioned they reside in neighboring towns, though it’s not clear if the new Board President supports the policy.

This year, Spencer, Franchesca Rodriguez, and Ronald Hush are up for re-election in April.

The meetings are neither taped nor televised, a conscious and unanimous decision of the board’s members, making it harder to hold the board accountable.

Unlike the City Council meetings, Board of Education meetings are not even made available for viewing on the internet.

Because they are sometimes not recorded at all, the public portion of the meetings can get wild.

The Board of Education is meeting on the following dates at New Brunswick High School:

The board will formally vote on its schedule for the next school year after the April election, where voters will decide whether to approve the district’s budget, and choose the next three board members.

The board is now chaired by Patricia Sadowski, a nurse who lives in the Rutgers Village neighborhood.

A strong ally of Mayor James Cahill, Sadowski has been on the board for a long time, and like the other board members, was against instituting elections.

She is much more fair to the individuals who speak up at the board meetings.

Spencer would regularly shut down residents trying to speak at meetings, avoid questions, and even deny out-of-towners the opportunity to speak at all, including a recent district alum.

While board meetings often include special performances by schoolchildren or recognition of staff, the rest of the meeting typically goes by quickly.

Board members also serve on committees such as Athletics, Personnel, Facilities, and Finance. At each board meeting, many of the board members give reports on their committees.

After the committee reports, the board usually votes on its resolutions in one fell swoop, often with no discussion. Then comes the public comment period.

The election will be held on April 23, and the deadline for candidates to get their names on the ballot is March 2.

Each candidate must be a U.S. citizen, 18 or older, and have lived in the city for at least one year.

Candidates are required to submit at least ten valid signatures from registered New Brunswick voters to the Board of Education office at 268 Baldwin Street by 4pm on March 2.

More information about how to run for school board, including a candidate kit, is available at the NJ School Boards Association website.

The winners of the April 21 election will serve a three-year term on the board.  They are prevented from working in the school district or entering contracts with the district during their time on the board.