NEW BRUNSWICK, NJ—Middlesex County Superior Court Judge  Bradley Ferencz is preparing to retire from his powerful position, having served as Presiding Judge of Criminal Division since 2011.

One of Ferencz’s clerks confirmed to New Brunswick Today that the judge’s last “work day” will be January 16, and he will be officially retiring at the end of January.

Ferencz, an East Brunswick resident, earns a $165,000 annual salary as a judge, and has been enrolled in the state pension system since 1997.

Middlsex County Assignment Judge Travis Francis will get to pick his successor, but his office has not yet announced who will get the position. 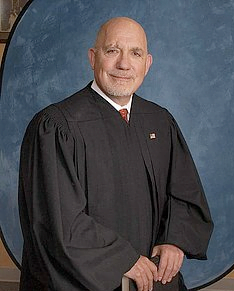 Ferencz presided over major cases covered by New Brunswick Today, including the conviction of two New Brunswick Parking Authority employees that he opted to throw out, electronic discovery issues in a city-based racketeering and murder case, and the drunk driving conviction of Ernie Feist, an engineer who worked for Perth Amboy and Monroe Township.

He also presided over arraignments of Timothy Puskas, the landlord accused of killing a college student in New Brunswick earlier this year, and Kevin Roper, the driver of the Walmart truck that struck actor and comedian Tracy Morgan’s bus in a fatal crash.

Ferencz’s retirement also comes shortly after the departure of another judge, Lorraine Pullen, who retired earlier around the same time criminal charges were filed against probation officer Rhonda Battle, who worked in her courtroom.

As we reported, Battle spent a night in jail after being charged with taking bribes from an offender as well as official misconduct.

It’s one of at least two recent cases brought against public officials for misconduct that Ferencz has been presiding over.

Margaret Brennan, who pleaded guilty to stealing from the Middlesex County Utilities Authority, a government agency where she was the Treasurer and Comptroller, saw her case quickly and quietly resolved in time for the holidays.

Brennan was given time to put together bail money, and did not spend any time in jail yet.

Another judge will likely handle her sentencing, scheduled for February 2, just after Ferencz’s retirement.