The decision comes in response to a lawsuit filed by John Fleming, a 50-year-old man who often holds up a sign asking for money on George Street.

“John Fleming may be homeless, but he’s not hopeless or helpless in his battle against the begging ban in New Brunswick,” said NJTV reporter Michael Hill.

“Casting aside all Constitutional free speech requirements, the City of New Brunswick deprives the poor and homeless of their freedom of speech by precluding them from peacefully requesting food or monetary assistance,” reads an introductory statement filed by pro bono attorneys at the firm McCarter & English.

“Indeed the city has arrested and jailed wheelchair-bound plaintiff John Fleming merely because he held a sign saying ‘BROKE PLEASE HELP GOD BLESS YOU THANK YOU,” it continues.

“That gets your attention,” said Judge Frank Ciuffani, crediting the authors of the legal filing, who were brought in by the American Civil Liberties Union of NJ (ACLU-NJ) and represented Fleming and the Coalition to End Homelessness.

“The right to ask your neighbors for assistance or food is a First Amendment right and what it essentially does is criminalize being homeless or poor,” Jeanne LoCicero of ACLU-NJ told Hill, the NJTV reporter.

Fleming’s sole method panhandling involves sitting in his wheelchair, which he needs because of a physical disability, and holding a sign. 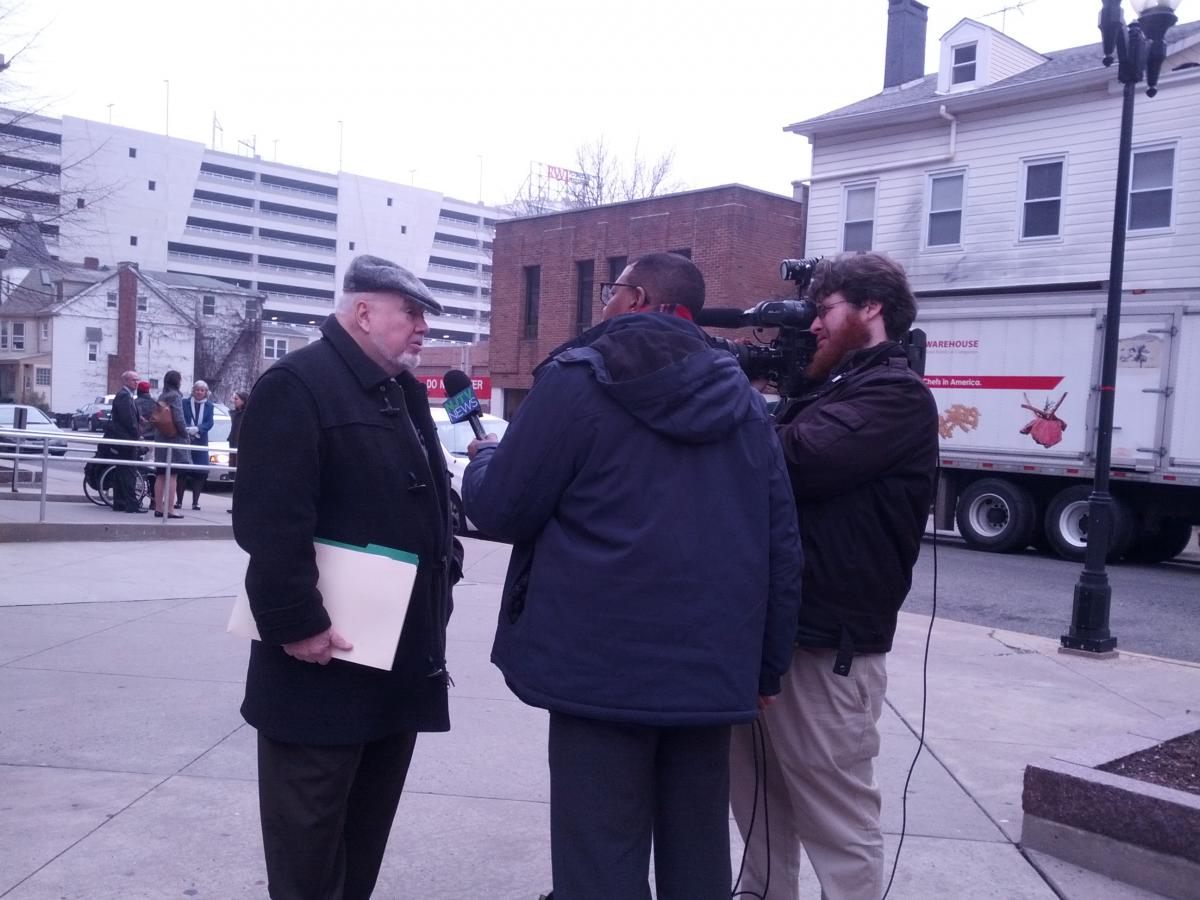 The city did not object to the TRO, and New Brunswick’s longtime City Attorney William Hamilton agreed to review the city’s ordinances and suggest changes that might make the law “pass muster.”

“We’re not trying to criminalize poverty.  We’re trying to have an orderly city,” Hamilton said in his NJTV interview.

Any change to the ordinances would require approval from a majority of the City Council and Mayor James Cahill.

Hamilton has served as the head of Cahill’s Law Department for his entire 24-years as Mayor.  Cahill will be sworn into an unprecedented seventh term next month.

Acknowledging the order was an extraordinary form of relief, Judge Ciuffani insisted Hamilton’s lack of objection had nothing to do with the “holiday spirit,” during the December 22 hearing.

“This is not just in the holiday spirit, [Hamilton]’s always like this.  He’s fair, he’s reasonable, and he makes a very intelligent approach to things.  And he’s served the City of New Brunswick very well in that regard for a long time.”

The first ordinance, known as the “Anti-Begging Ordinance,” deems it “disorderly conduct” to beg for food or money on any street or sidewalk in New Brunswick.

The second ordinance, the “Charitable Solicitation Permit Ordinance,” prohibits individuals from engaging in speech that constitutes “charitable solicitation” anywhere in the city without a permit, and requires City Council approval for all such permits.

It is often used by supporters of the annual Rutgers Dance Marathon to get permission from the city for “canning” fundraising campaigns at high-traffic intersections in the city.

City Council granted Dance Marathon’s approvals to collect donations from pedestrians and drivers at eight different intersections in the city to support the largest philanthropic event in New Jersey.

The application for the permit requires information to be filled out which many homeless people would not be able to, such as “the name and address of the person or persons who will be in direct charge of conducting the solicitation.”

The plaintiffs also claim that the Charitable Solicitation Permit Ordinance is unconstitutionally vague, because it states that a permit must be obtained to beg, but provides no guidance on how an individual can acquire one of these permits.

Sometimes officers charged Fleming with violating the anti-begging ordinance.  Other times, he was charged him with failing to get a permit under the other law. After receiving a total of three summonses, Fleming was imprisoned in county jail on October 24, on a bench warrant for failing to appear in court on for a ticket he had received for panhandling.

Fleming was detained there for three weeks because of his inability to pay bail and because of a warrant for a traffic violation in Watchung from over 10 years ago.

Fleming is both wheelchair-bound and recently homeless, but he conducted online research and found a legal precedent that could be used to strike down the city’s laws.

He sought the help of the ACLU, a national group which believes such laws are a violation of the US Constitution’s First Amendment, which guarantees the right to free speech.

But those tickets may soon be a thing of the past, as Judge  Ciuffani agreed to temporarily suspend the city’s power to enforce both of the anti-panhandling laws.

City attorney William Hamilton said it was the first time anyone complained about the law, which he said was “probably eighty years old.”

“We are going to take a look at the ordinance, it’s never been questioned before.  I’m sure it’s going to be modified and I hope that people will be satisfied when we get finished modifying it.”

The next hearing in the case is scheduled for February 12 at 1:30pm in courtroom #304 at the Middlesex County Courthouse.