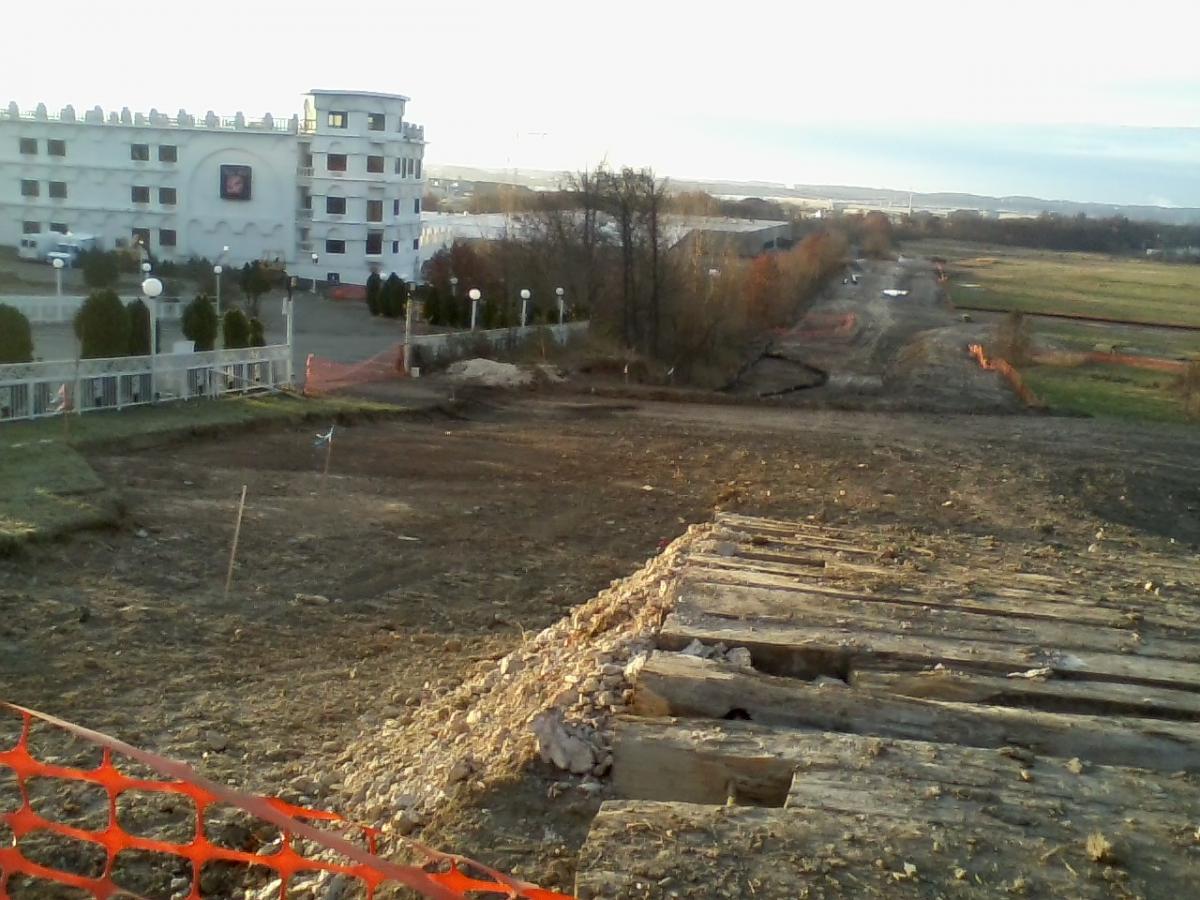 But it appears the project's supporters may have forgotten the lessons of an infamous and devastating gas explosion that struck Edison twenty years ago, and ignored the spirit of a township ordinance meant to keep pipelines from running near homes and other buildings.

"It's right next to a three-family [house] that I own!!!" said Barry Telesnick. "I'm afraid the value is going to plunge"

Matt Smith, an organizer with the national non-profit Food & Water Watch, said that pipelines like this one usually have a negative impact on property values, which "not only hurts individual homewoners but [also] hurts the tax base for the municipality."

"I haven't talked to [Edison officials] on that," said Middlesex County Freeholder Charles Tomaro, a former Edison Councilman, when asked at the December 4 meeting about the pipeline.

Tomaro has not responded to subsequent requests for comment about the pipeline's route through the residential area.

"Those are local issues that are governed by the local municipalities," said Freeholder Director Ronald Rios on December 18, also dodging the question of whether it is acceptable for gas pipelines to be put right next to buildings.

Melissa Perilstein, a former Town Council member who works in Lankey's administration told New Brunswick Today, "Obviously we wanted to do our part to help energy supply in the region," before going off the record.

Perilstein promised an "on the record" statement from the administration but never provided one.

The path of the "Woodbridge Delivery Lateral" through Edison and Woodbridge has become evident to residents, workers, and visitors in the Raritan Center area of Edison and the Fords section of Woodbridge, where the destruction is apparent.

"Construction of the Woodbridge Delivery Lateral will disturb approximately 16 acres of land, of which approximately nine acres will be used for permanent operations," reads the pipeline's approval by the Federal Energy Regulatory Commission.

The 2.4-mile underground pipe would connect the nation's largest gas pipeline system, Transco, to a new gas power plant set to open next year in the Keasbey section of Woodbridge.

At an estimated cost of $32.2 million, the project would provide the power plant with a steady transmission of gas extracted from areas in Pennsylvania where hydraulic fracturing, or "fracking," is presently producing large quantities of gas through a risky drilling process.

"It's going to provide cheaper electricity and also tax revenue for the town," said Middlesex County Freeholder Charles Kenny, an ally of McCormac,  who was recently named "Environmentalist of the Year" by Christie's Department of Environmental Protection.

"I like the mayor," said Jeff Tittel of the NJ Sierra Club, the nation's oldest and largest environmental group.  "But the governor with the worst environmental record of any in history calling you an environmentalist is not a badge of honor."

A spokesperson for McCormac said at first that the pipeline "does not traverse through any populated or residential areas."

But when questioned if that included the pipeline's path through Edison, Hagerty could not say for sure if that was the case.

"It's a necesary aspect of getting the billion dollar power plant," Hagerty told New Brunswick Today.

According to the USPL website, "project completion is anticipated for January 2015."

Several landowners in Edison challenged the construction of the pipeline in a public hearing process, including manufacturer Johns Manville, real estate developer Kaplan Companies, and non-profit organization that runs an "organ procurement and tissue recovery" operation.

The "Musculoskeletal Transplant Foundation" (MTF) operates a tissue bank on its property along the route of the proposed Woodbridge Delivery Lateral.

MTF says they were already approved to construct a new building and parking lot on their property in Edison, but an Township ordinance says “no building or land disturbance shall be permitted within seventy-five (75) feet of any distribution, gathering, or transmission line," and their proposed building does not comply.

Two thousand people were evacuated from Edison and Metuchen, and approximately 300 people were left homeless and 100 were in need of medical attention.  In total, fourteen of the complex's 63 apartment buildings were damaged or destroyed.

"The 80-foot-long rupture in the pipe occurred on property occupied by [an] asphalt plant and ripped a crater approximately 100 feet long, 50 feet wide, and 40 feet deep," reads a report published by the town's fire chief.

"This sent a shower of bedrock and shale, some pieces the size of bowling balls, as far as 800 feet in all directions," the report continues.  "A 40-foot section of ruptured pipeline was hurled 350 feet by the blast."

At the Durham Woods apartments complex, debris smashed through windows and roofs, breaking tables, knocking kitchen cabinets off the walls, and, in one case, breaking a man's leg as he lay in bed."

Between 60 and 90 seconds after rupture, the escaping high-pressure gas ignited, sending a giant fireball 500 feet into the air, turning night into day. Some residents looked out of their patio doors and saw their plastic lawn furniture beginning to melt. In just a short time at Durham Woods apartments, the exteriors of buildings closest to the fire began to burn, and one resident reported that his interior walls were "starting to smoke." By the time the first fire unit arrived at the complex, just minutes after the explosion, Building 12 already was fully involved.

To this day,  more than two decades later, Edison's residents are extra careful about putting buildings near pipelines.

But that apparently doesn't hold true for the converse situation, when pipelines are built near, or in this case, immediately adjacent to buildings.

Another much longer pipeline slated to transport oil to and from a refinery in the same area, known as the "Pilgrim Pipeline" would infringe on residential areas, schools, and environmentally sensitive areas as well.

According to the company that wants to build it, the pipelines would each carry 200,000 gallons of oil daily.  Though the risk of explosion is less likely for oil pipelines, activists say its construction will require "blasting" that could distrub nearby gas pipelines like the one that exploded in 1994.

"The number one cause of gas explosions is construction activity," said Smith, the Food & Water Watch activist. But he said spills are the more likely danger with oil pipelines.

"We're talking about a pipeline thats going to be pumping oil through the region for decades. It's not a matter of if but when there will be a spill and how much drinking water will be affected," said Smith, who said it could impact two irreplaceable sources of drinking water in New Jersey.

The PHMSA reported 354 "serious" spills across the country this year, including those from trucks, railroad cars, pipelines, and other modes of transportation, as of this weekend.

Calling the Pilgrim Pipeline plans a "dirty deal for New Jersey," Smith told New Brunswick Today, "It's really been inspriring to see all the communities getting organized and building opposition."

Edison's Mayor Thomas Lankey did not respond to repeated requests for comment on the plans.  Metuchen Mayor Thomas Valhalla did not return a phone message left with the Borough Clerk.

"This project is still in its preliminary stages and we are currently determining the most appropriate route," reads the answer to a frequently asked question on the company's website: "Why can't you tell me exactly where the route is?"

The company's website only indicates the pipeline will connect "Albany and Linden, NJ," on the site.

Smith and Tittel agreed that it would not be proper for the state's Board of Public Utilities to grant public utility status to the pipeline, which they say does nothing for New Jersey.