NEW BRUNSWICK, NJ—Tensions ran high on Friday as protest organizers steered a crowd of well over 100 people onto Route 18, the city’s main artery, taking a historic stand against racism and the lack of accountability for police killings across the country.

City spokesperson Jennifer Bradshaw confirmed there were “no arrests or incidents related to the protests,” which started at the Douglass Student Center on George Street.

The protest march came on the heels of another larger gathering in New Brunswick, organized by the same group in response to a grand jury’s decision not to indict a police officer who killed an unarmed African-American man in Missouri. 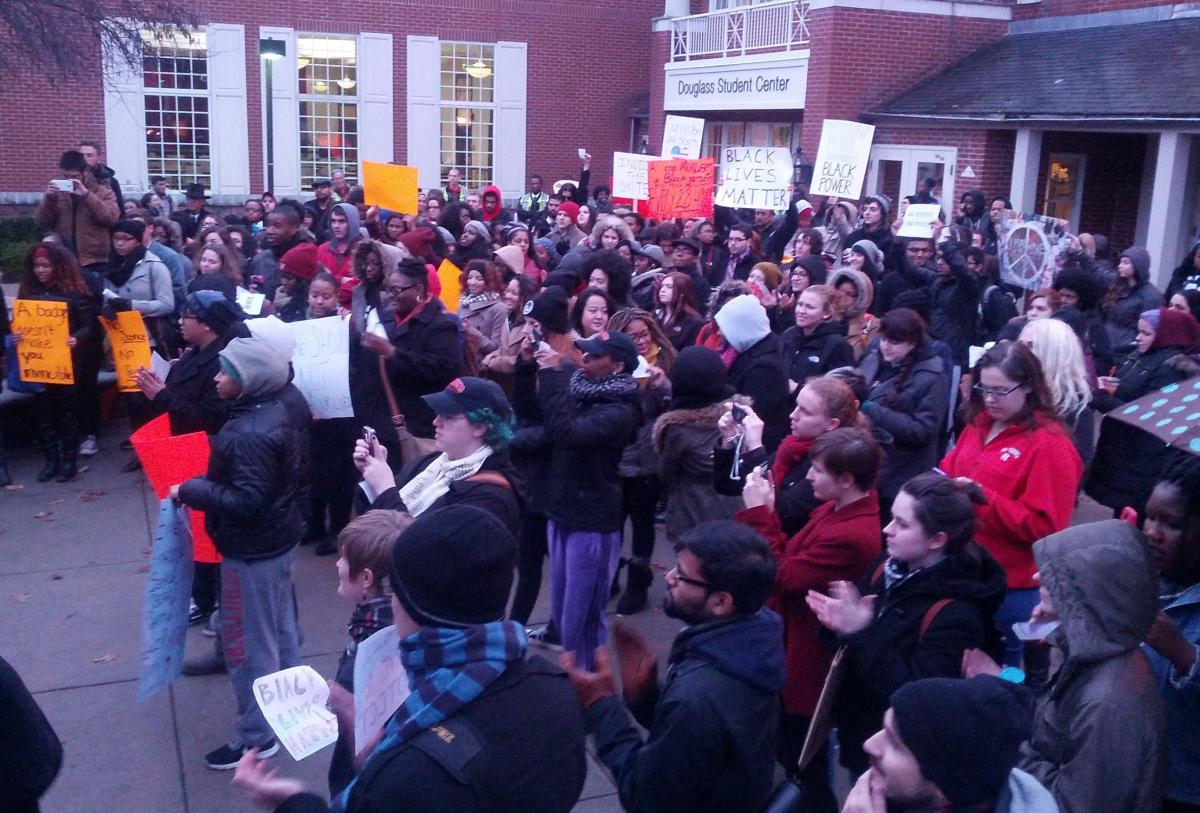 The campus-based protest started at 3:30pm, as Rutgers students and city residents alike gathered to protest a grand jury’s decision.

“Yes my words exist, but they are being drowned out by eulogies and funeral services,” said one organizer.  ” They are being overwhelmed by the sounds of distraught screams of parents after they bury their legacies into the ground.”

Among the chants were the dying words of Eric Garner, “I can’t breathe,” which he repeated eleven times as he was being restrained by the NYPD.

The tactic, employed by the “People’s Coalition Against Police Brutality” for the first time on Friday, December 5, has received mixed reviews.

“This is disgusting!” said one commenter on the New Brunswick Today Facebook page. “All these individuals should be arrested. Protesting becomes illegal when said protests restricts the freedom of movement to others.”

“Unreal what does blocking highways to about the problem besides pissing everyday people off trying to get home???” reads another.

“It’s sad that people are so angry about a minimal inconvenience that forces a commemoration of the tragic deaths of human lives by the police,” read the comment, with 93 likes. “The car delay is really insignificant when weighed against that.”

“Don’t the streets get blocked for breast cancer walks and parades?? Races and other things???” asked another commenter.  “People are tired of injustice and tired of being treated unfairly…it’s about time people started to listen.”

“To the morons saying this wasn’t a inconvenience. My dialysis patients that were over an hour late to their treatment because of all the back ups would disagree. Because of this patients treatments will most likely be cut short,” said one commenter.

“If you weren’t there you shouldn’t pass judgement,” countered one protester.  “We weren’t even in emergency route long and moved out of the way when an ambulance had to get through.” 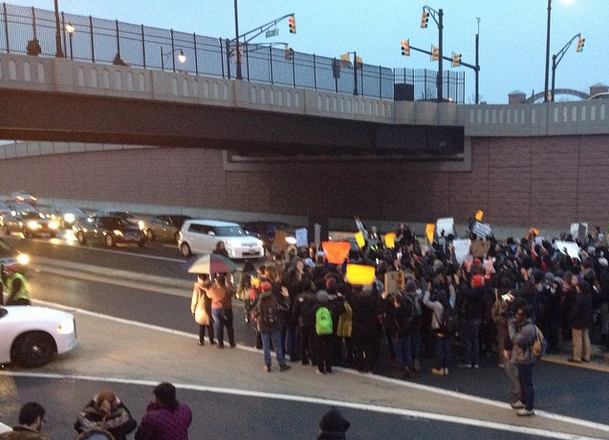 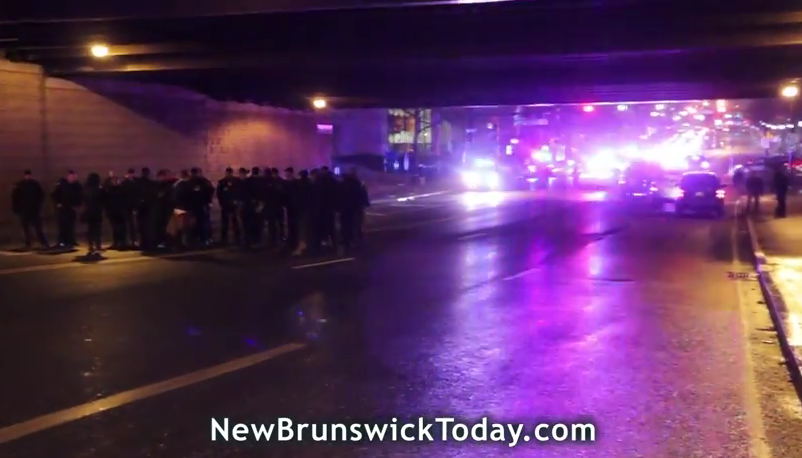 After New Brunswick police gathered reinforcements, including officers, vehicles to transport prisoners, and video cameras, a lieutenant made an announcement over his vehicle’s public address system telling protesters to disperse or face arrest.

“All New Brunswick officers, step up to underneath the bridge now!” said an officer over the police radio.

Repeating “Black lives matter,” the marchers forced the police to briefly march with them as the cops returned to the slew police vehicles left near the rear of the Hyatt Hotel.

They stopped twice to let a few individuals voice their anger before turning onto George Street, the downtown’s main drag, and later onto Bayard Street, going past City Hall.

“Tonight we shut down Route 18 on both sides of the highway which hasn’t been done in over 5 years,” reads a post on the Facebook page of the People’s Coalition Against Police Brutality, a new group that launched this year at Rutgers and led the protests. 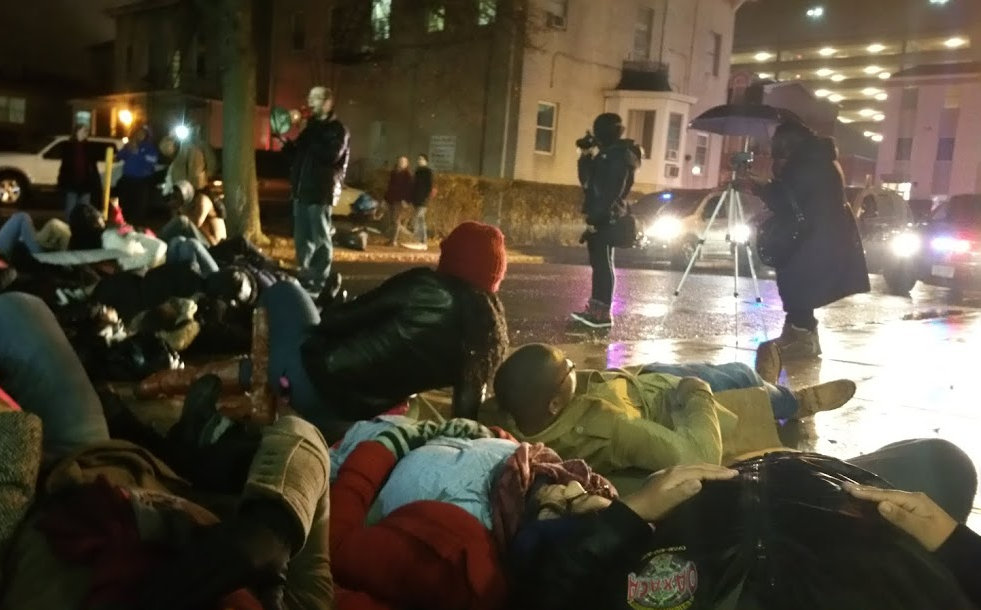 “These guys seem like they’re listening to reason,” said Seargent Raymond Trigg, over the police radio.

“Today we remember our black women, our latino women who are killed by the police, today we remember it is not just our brothers, it is our sisters,” began one of the organizers as she began to list female victims.

“Today we won’t forget these women, today we remember what we are doing is in their legacy.”

“You officers can stand here with us in solidarity, but you don’t,” the woman shouted before noticing an African-American officer.

“Shame to you, my brother over there,” which lead to a chant of shaming the officer.

“Y’all traded in your ropes for guns, but guess what ‘massa’?  We’re not begging for sh*t anymore,” which was met with roar from the protestors.  “You forget when you take your badge off, when you take off that uniform, you a n*gga, just like us.”

As the crowd made its way up Easton Avenue, they blocked the street again.  But after learning an ambulance needed to get through to St. Peter’s Hospital, the crowd cleared the way.

Shortly before 6:15, New Brunswick police opted to “hang back” and let Rutgers Police handle the situation.

Just about an hour before the crowd started gathering at the Douglass Student Center, New Brunswick Mayor James Cahill made the stunning announcement that the city would cancel its annual “tree lighting” ceremony in downtown due to the protests.

But the Mayor’s Office indicated otherwise.

“Monument Square has also been announced as the planned destination for a group protesting the recent grand jury decisions in Ferguson, Mo. and New York,” read the statement issued just under three hours before the tree lighting ceremony was set to begin.

“Given the threat of inclement weather further complicating tonight’s scheduled events and the logistical problems of large numbers of people attempting to occupy the same space but for different purposes, the tree lighting ceremony has been canceled.”

In 2011, the “tree lighting” was attended by protesters addressing a New Brunswick police killing without incident.

“I am under the impression that there are no plans to reschedule,” said Jennifer Bradshaw, the spokesperson for Mayor Cahill.  “If you’d like to discuss the why of that decision, I suggest speaking to Pam Stefanek at City Market.”

According to the city’s Facebook page, it is the “22nd annual” tree lighting, having been a Hub City tradition nearly as long as Cahill, who was first elected in 1991.

For the first time this year, no one ran against Cahill as he sought and received four more years.  His seventh term as the city’s chief executive begins in 2015.