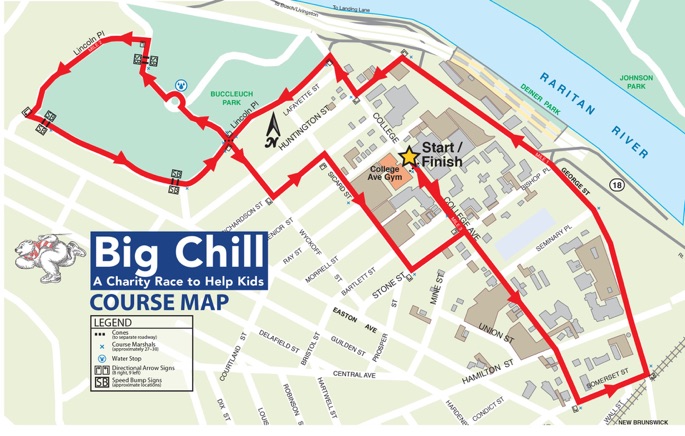 But the total is expected to reach at least 9,300 when walkers and runners finally line up this morning at 9 a.m. to start the race.

“We typically get 1,000 between Friday and Saturday, so we expect about 500 today to register,” Race Director, Anne Finetto, told New Brunswick Today before the Friday afternoon on-site registraton and packet pick-up at the College Avenue Gym began.

The course starts in front of the College Avenue Gym at Rutgers (130 College Avenue), and loops around the Sixth Ward of the city through Buccluech Park.

Unlike most charity races, the only requirement to register is an unwrapped toy.  No registration fees of any type are collected.

The gifts, which pile up high, are given to kids in the New Brunswick area for the holidays.

Race Day Registration and packet pick-up will take place from 7–8:30AM today, before the race starts.

While 68 percent of the participants are made up of Rutgers University students, faculty, and staff, the event is also popular among local running clubs and other runner's and walkers.

Typically, 35 percent of those who register walk the course. And the field of walkers and runner's represents 1000 more women than men, according to officials.

Though you had to be registered in advance (and pick-up your race packet on Friday) to win one of the two iPad's that will be given away, there are many other prizes and gifts that will be given to participants via a raffle – or even while walking the course!

Finetto explained that about eight student volunteers (who will be on the course) will give away prizes to particpants walking the course: “This year we are actually having the prizes on hand in little Santa bags… and they are going to be given prizes as they walk the Big Chill. So that’s new and different this year.”

“I cut it off [online registration] a day and a half early because we hit 7,000 people and I don’t like it to get to big because I want to make sure that everyone has a good time,” she said, last year.

“And we did Friday and same day registration. We did about another 1,300, so there were probably 8,000 registered. I don’t know how many came out on a cold day – but it stretched from the start line all the way down past the library – I could see them.”

Last year, almost 8,200 people between the ages of 13 and 78 walked or ran through the streets of the Hub City on a frigid race-day morning.