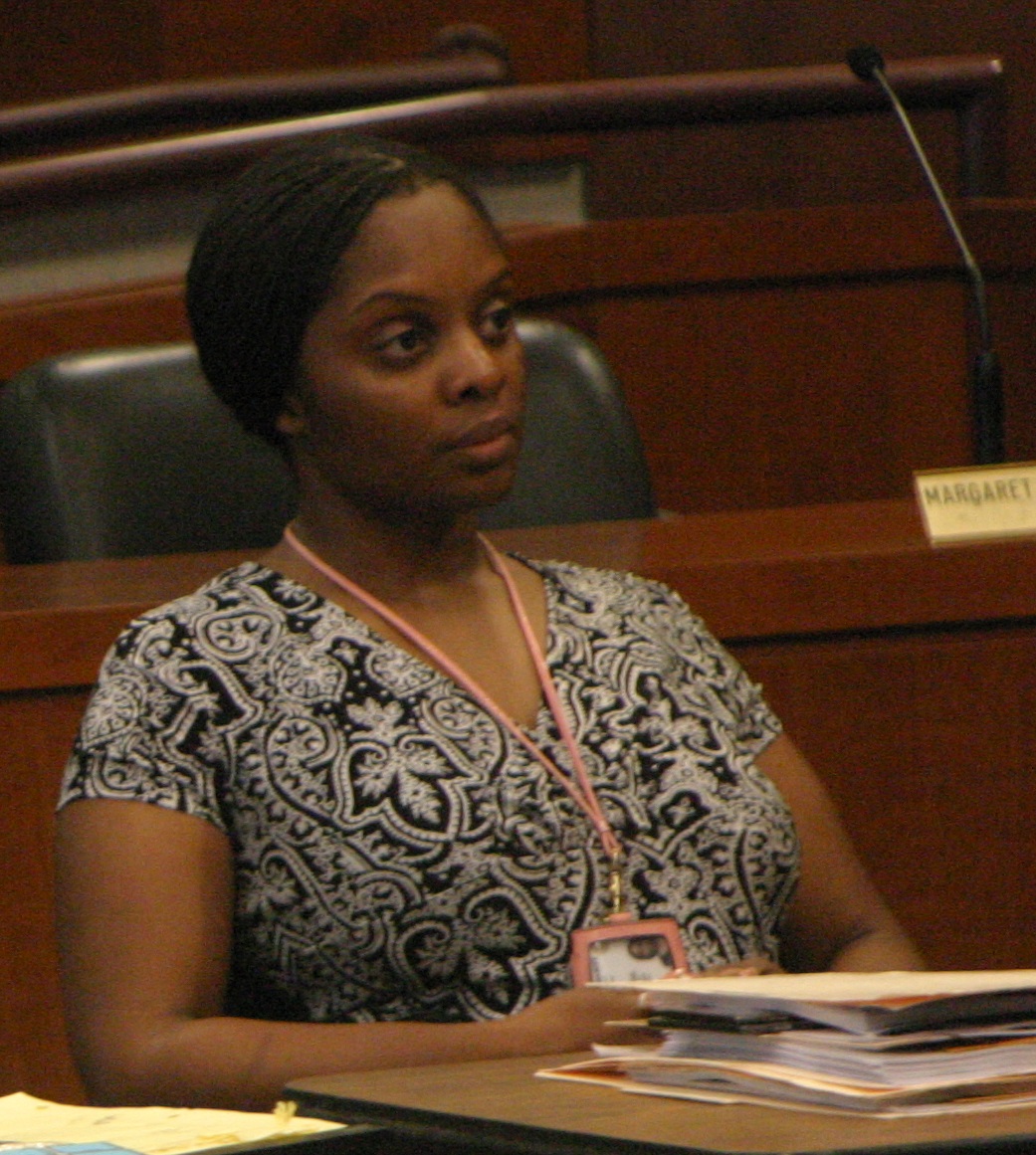 NEW BRUNSWICK, NJ—Less than 24 hours after New Brunswick Police Department promoted five officers, the Middlesex County Sheriff's Office was not to be outdone.

Sheriff Mildred Scott promoted six officers in total during a ceremony in courtroom #201 of the Middlesex County Courthouse on November 26.

Unlike New Brunswick Police Department's promotion ceremony, this one was open to the press and the public.

"As an officer coming up through the ranks, you want to get to the top," said Scott. "Sometimes it's only so many positions at that top, but we all strive to get there. But with God's grace and time, hopefully we will all get there."

Two of the promotions were not subject to civil service tests, and one of those has drawn criticism.

Sgt. Candice Burress Burgess, who Scott has taken under her wing and promoted last year to the powerful head of Internal Affairs, will follow in her boss' footsteps bypassing the lieutenant role to become Middlesex County's Chief Warrant Officer.

Burgess, who hails from Montclair, failed the test to become a lieutenant, telling the Home News Tribune's Sergio Bichao it was "devastating."

But Scott rescued her career, promoting her to the chief warrant officer position.

"It's a little weird, but it's a great honor," she told the newspaper. "When the sheriff leaves, I can go back to being a sergeant."

Some have called into question the promotion because Burgess has only been with the department since August 22, 2005.

She started working in the courthouse/transportation division, and in 2012, she was re-assigned by Scott to the Internal Affairs Bureau, which handles cases brought by citizens, and sometimes officers, against her fellow sheriff's officers.

Burgess had her two children, as well as local attorney Joseph Mazraani and Middlesex County First Assistant Prosecutor Christopher Kubereit stand with her for the swearing-in.

"My goal is to see this department go to great greatness," Burgess said.   "We're great as it is already but I want to see it better."

Burgess thanked the Sheriff, her colleagues, and retired officer John Dwyer, and even mentioned the author of this article in her remarks after being sworn in.

"We have individuals like Mr. Kratovil here who are reporting us in the paper," Burgess said.  "I want to see the positive stuff from him: Sheriff's Department doing great things, they're out there on the road helping people."

"We are under a very watchful eye," Burgess said ominously.  "The public watches every little thing that we do.  It's our responsibility to stand up and do the right thing." 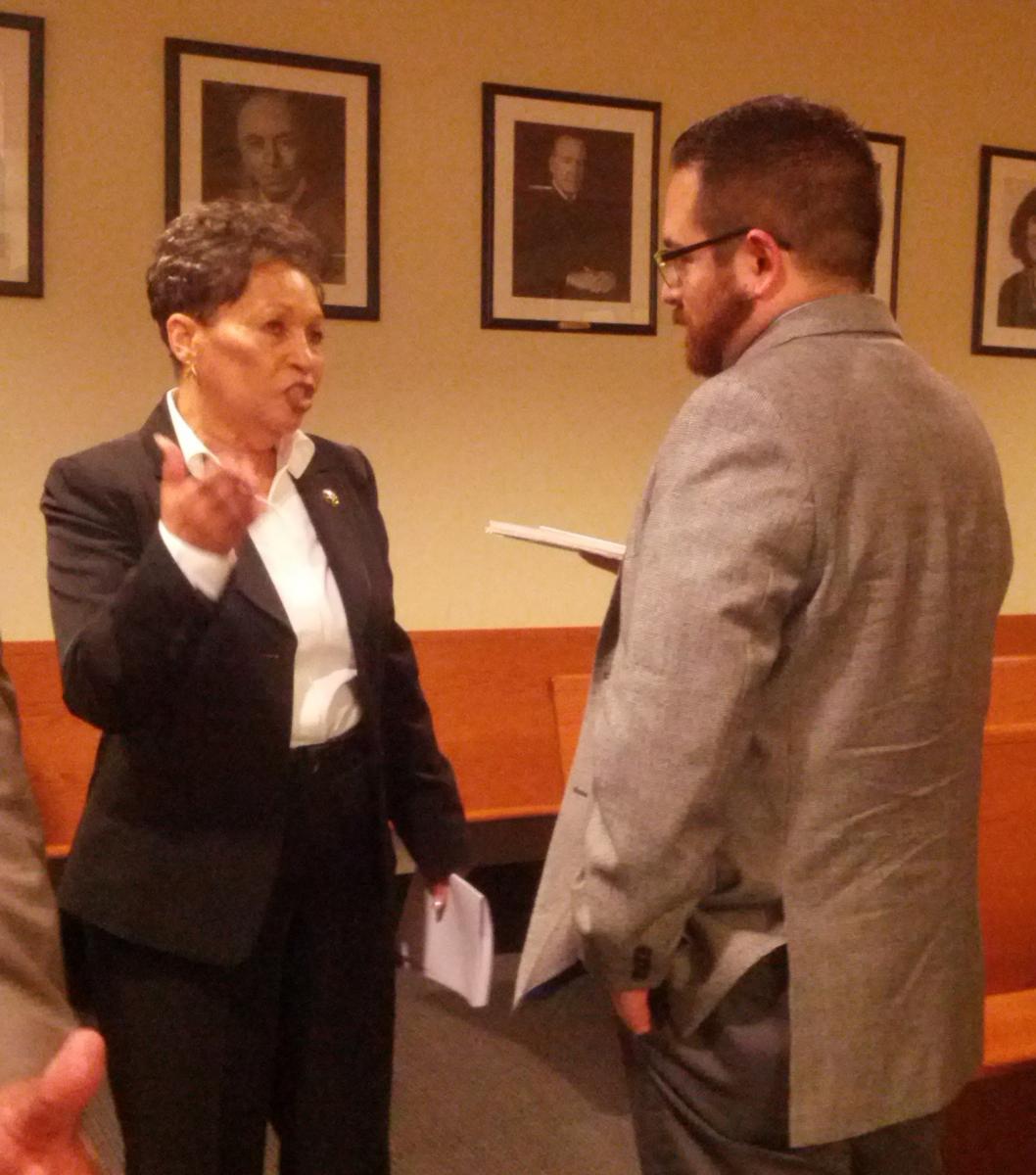 Scott is in a difficult position as she enters the second year of her second three-year term.  She took over, and was the handpicked successor of longtime Sheriff Joseph Spicuzzo, who currently resides in a state prison in Trenton.

Spicuzzo and two of his subordinates were convicted of selling investigator jobs in an unprecedented scheme at the department, and Scott has come under fire for terminating those who admitted to State Police to paying bribes for their jobs.

The fired investigators say Scott was part and parcel to Spicuzzo's cash-for-jobs scheme, and they are being wrongly terminated as payback for ratting out the former Sheriff.

But Scott says she is just doing her best to clean up the department, and as head of internal affairs, Burgess has played a key role in that process, which first started ramping up more than two years after the indictment against Spicuzzo.

"[Burgess] means business. And you gotta follow the rules," said Scott, who cited Burgess' 8 years in the military and 9 years as a sheriff's officer, particularly her time as head of internal affairs.

"She was thrown in at a difficult time," said Scott  "In the short period of time that I've seen her [in Administration]… she was above and beyond."

Scott was appointed by Spicuzzo to the Chief Warrant Officer position in 1982, helping her bypass the position of lieutenant, just as Scott has now done for Burgess.

In her remarks at the ceremony, Scott said Burgess comes to work early and stays late, and takes on challenges in her community and personal life, including coaching youth soccer teams and "extreme sports" like skydiving and scuba diving.

"I love my job, I'm passionate about my job," said Burgess, admitting she does often arrive early and stay late at work.  "It's because I care."

"I know there's a saying.  I don't know who said it but 'If you love your job, you'll never work a day in your life,'" Burgess said.  "I've worked a few days, quite a few days," she joked.

Burgess said hopes to attend the FBI Academy, with the permission of her boss of course.

"Some positions I have discretion," said Scott.

"I have to say sometimes it's very difficult because we have so many people with so many different skills… I don't take it very lightly," she said before calling Lt. Gilbert Neilsen to the front of the courtroom.

Scott elected to promote Nielsen, who was raised in Edison and lives in Metuchen, to the position of Director.  Neilsen joined the department in 2003, was promoted to seargent in 2010 and lieutenant in 2013.

"The director is coming in at a time that we are changing things," said Scott.  "He will oversee everything except the Courthouse and [Internal Affairs]."

"I know it's not going to be easy in the beginning," Scott told Neilsen.  "But you have a lot of people to lean on and a lot of input."

James Rizzi was also sworn in as a captain, William Germann became a lieutenant, and Mark Ciminieri and Timothy Smith were sworn in as sergeants. 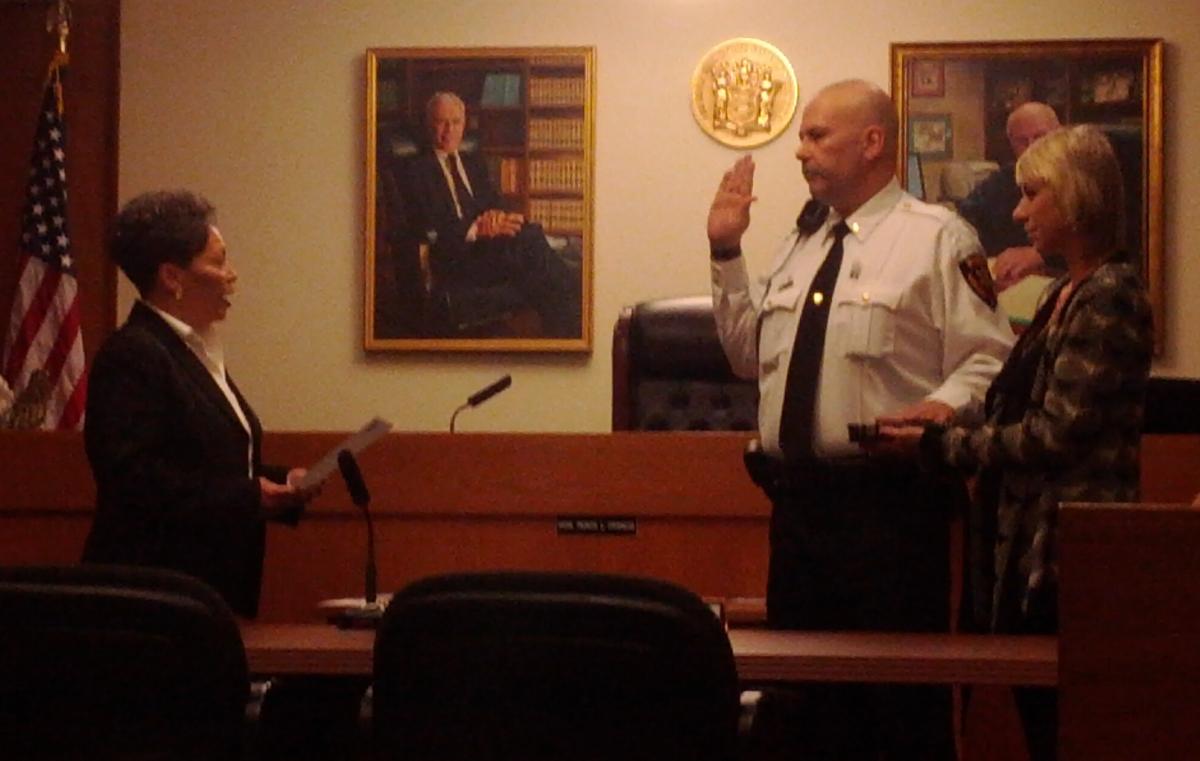 Rizzi, one of many sheriff's officer who has also worked in the county jail,  will now be "a person that's charged with security at the courthouses… and reports to some of the judges," according to Sheriff Scott.

"As a Captain you make decisions spontaneously," said Scott.

"As everybody knows this job we have here is a stressful job sometimes, but I've been fortunate that I've always been surrounded by good people," said Rizzi.

Germann, a Marine Corps veteran and graduate of Sayreville High School, joined the department in 1999 after stints as a prison guard and parks police officer.

Scott commended Germann on his volunteer service with the department's honor guard.

"With the help and support of my fellow officers… I'm sure I'm gonna do a good job.  I'm going to do the best I can," said Germann.

Two officers were promoted to seargent, the first step into the supervisory realm.

"Becoming a seargent is one of the hardest positions to fill, hardest superior officer position because now you're breaking away from your peers," said Scott.

Officer Mark Ciminieri, a resident of South River who was raised in Edison, has been a Sheriff's officer since 2002 and also volunteers with the honor guard.  Like Rizzi, Germann, and many of his other colleagues, his career also involved working in the Middlesex County jail.

"I want to ensure to all my peers, who will be my subordinates now that I will to the best of my abilities be fair and imparital in any decisions I make," said Ciminieri.

The Thanksgiving Eve ceremony was moving to some, including newly-minted seargent Timothy Smith.

"I have been blessed with this opportunity to continue being a positive influence in our community," said Smith.  "Thank you to each and everyone who has enriched my life, supported me and sacrificed their time and energy to get me where I am now."

Smith got a little choked up as he thanked his "beautiful wife and daughter."

"I know I haven't always been there for you all the time, but I love you both more than words could say."