NEW BRUNSWICK, NJ—Hundreds of students, faculty, and community members rallied and marched across the city on November 25, in response to the decision of a St. Louis County, Missouri grand jury investigating the death of Michael Brown in Ferguson, Missouri.

City officials estimate there were some 400 protestors, while organizers said there were more than 500 present for the march down George Street.

On Saturday August 9, Brown was shot and killed by Ferguson police officer Darren Wilson.  Many people across the country were outraged because Brown, a black teenager, was unarmed, and shot by a white police officer in broad daylight.

Brown’s body was also left out in the sun for hours, adding to the outrage. Subsequent protests were countered by overtly-militarized police who arrested journalists and pointed assault rifles at unarmed civilians.

Eventually, the United States President had to step in, announcing that a larger, more respectable police force would be responsible for keeping order in Ferguson during the protests.

The grand jury’s decision not to indict Wilson, and the process that led up to it, have since come under fire for many reasons, including an unusual decision to allow Officer Wilson to testify. Typically, defendants are not invited to speak at grand jury proceedings.

Wilson not only testified, but many of the assertions in his testimony went unquestioned by the staff of St. Louis County Prosecutor Bob McCulloch, and the 12-member grand jury.

On November 24, the grand jury decided not to indict Officer Wilson. Organizers at Rutgers were already planning to march in response to the decision before it was announced.

Tuesday’s march in New Brunswick was to “stand in solidarity with Ferguson and it is important that all of us can protest against racial discrimination,” said Rutgers University Speak Out! Member Fullamusu Bangura.

The march started at the Douglas Student Center, went down George Street, crossed over to College Avenue, and ended at Brower Commons. 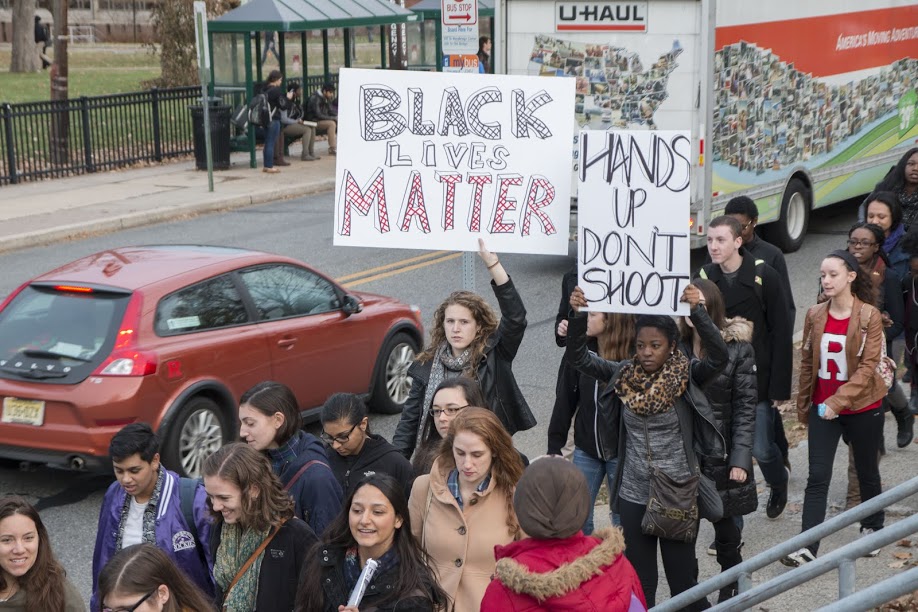 Once the crowd assembled, there was a rally including speakers and chants. Chants included phrases such as “Hands up, don’t shoot,” “Black Lives Matter,” “No justice, no peace,” and “The people united will never be defeated.”

It is extremely rare for a grand jury to not hand up an indictment, according to statistics.

By contrast, in a similar situation where a 46-year-old man named Barry Deloatch was killed by police in New Brunswick, the county prosecutor only acknowledged the existence of 280 pieces of evidence and testimony from 57 witnesses when the grand jury declined to indict.

“The Middlesex County Prosecutor’s Office is acutely aware that the use of deadly force by law enforcement will, appropriately, generate questions by the affected family members, concerned community members and leaders, and the public at large,” read the statement from the prosecutor’s office.

“However, under the laws of our state, court rules, and Attorney General directives, the grand jury proceedings are confidential and the Middlesex County Prosecutor’s Office is strictly prohibited from disclosing the names of witnesses who testified before the grand jury and/or the contents of their testimony.”

St. Louis County’s decision to release the transcripts and other evidence to the press and the general public has led to further scrutiny of the investigation and the way the prosecutor handled the matter before the grand jury.

Among the revelations from the documents were shocking details, including the fact that Wilson fired twelve shots in the altercation, six of which hit Brown, as we reported earlier this week. 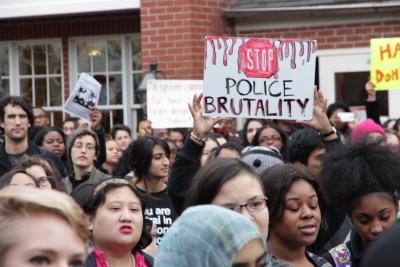 Even more shocking, Wilson left the scene of the crime unescorted, packaged his own gun as evidence, washed blood from his hands, and was questioned by fellow officers in conversations that were not recorded, according to the documents released.

“The grand jury transcripts revealed… that the officers who interviewed Wilson immediately after the shooting did not tape the conversations,” reads an article published in the Washington Post.

“The transcripts also showed that an investigator from the medical examiner’s office opted not to take measurements at the crime scene and arrived there believing that what happened between Brown and Wilson was ‘self-explanatory.””

“An officer driving himself back? Wrong. An officer booking his own gun into evidence? Wrong,” police shooting expert David Klinger told the Post. “The appropriate investigative procedures were not followed.’’

Ezra Sholom, of the People’s Coalition Against Police Brutality helped organize the protest march, deemed it a success.

“Tuesday’s March in solidarity with Ferguson was the largest protest I have ever seen at Rutgers/New Brunswick,” said Shalom.  “It demonstrated that Rutgers students and New Brunswick residents have reached our breaking point and are willing to stand together to put an end to a systematically racist and oppressive criminal justice system.”

Other student groups, such as the United Black Council, the Paul Robeson Cultural Center, and many others participated in the march.

Briana Gilchrist, a member of the United Black Council said, “ We are here to show that an injustice here is an injustice anywhere. Black lives matter and all lives matter. There is a problem with our system and thins need to change.”

Community members responded positively to the march as well. Leona Callahan, who was watching and supporting the march on George Street, said “I’m happy this is going on because what happened last night wasn’t right and we need some justice for Mike Brown.”

Several students spoke at the rally encouraged the crowd to organize in a non-violent manner and to tackle police brutality and racism on their own home fronts.

Cooper closed by saying “by affirming that black lives matter, it means that all lives matter.”

Later that night, in a church in Highland Park, roughly 50 people attended a vigil “to express outrage and hope,” organized by activist Ashton Burrell.

Though they say it is unrelated to Ferguson, the Mayors of New Jersey’s three largest cities announced this week that at least some of their police officers will start wearing body cameras, joining Atlantic City, Evesham and Cherry Hill. 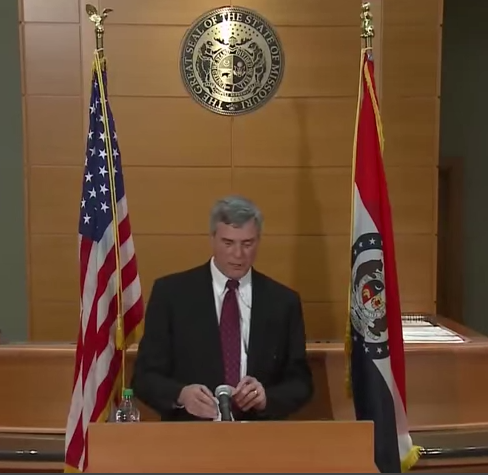 Prosecutor McCulloch announced the grand jury’s decision in a live broadcast at 9pm on Monday night, in prepared remarks that went on for 25 minutes.  McCulloch also took questions from the press for the remainder of the hour.

This decision led to widespread protests and even some rioting against the justice system and police brutality.  Large gatherings commenced in New York City and Newark, and memories of past situations in New Brunswick were evoked by protests here.

While Missouri law requires nine out of twelve grand jurors to indict a defendant and force a trial, New Jersey’s grand juries are much bigger.

In New Jersey, only a majority of grand jurors are required to hand up an indictment, just 12 out of the 23 who participate.

Though the results were the same, there were some key differences between the Ferguson case and a Middlesex County grand jury’s call not to indict New Brunswick Police Officer Brad Berdel in the September 2011 killing of Barry Deloatch.

Deloatch was killed by Berdel in a very suspicious incident that sparked a wave of protests.  Deloatch was also unarmed, but authorities claimed he picked up a stick. 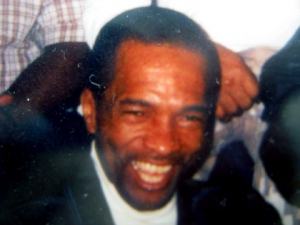 In that case, we reported that the shooting victim’s two sons were not even notified of the decision not to indict their father’s killer.  By contrast, McCulloch began his remarks by acknowledging the tragedy and the loss sufferred by the Brown family.

Here in Middlesex County, then-Prosecutor Bruce Kaplan released only a five-page press release that did not mention Deloatch’s family.

On the final page of the release, MCPO only briefly acknowledged the tragedy.

“While the shooting is a tragedy on many levels, it is clear that the grand jury conducted a thorough, impartial and independent review,’’ Prosecutor Kaplan said.

Another key difference between the two situations is that the man prosecuting the officer is an elected official in Missouri.

New Jersey’s prosecutors are not elected.  Rather, they are appointed by state governors.

Kaplan is no longer the county prosecutor, but Governor Christie Christie appointed him to become a judge in Essex County, where some have complained he treats people of color with disrespect.

Berdel retired after getting paid 15 months of salary while on “administrative leave” following the killing of Deloatch.  As we reported, city officials misled the public to believe he was retiring in August 2012, three months after the grand jury decision.

New Brunswick Police Director Anthony Caputo said Berdel would have to face punishment for three departmental charges for not wearing the proper uniform on the night Deloatch was killed.  According to the grand jury testimony, Berdel did not have either of his batons or a canister of pepper spray.

Rather than face the charges, city officials agreed to let Berdel retire, but allowed him to collect a salary for an additional four months without any specific reason.

It is still not clear whether Darren Wilson will return to active duty with the Ferguson Police Department.

Editor’s Note: Photographs in this article were taken by Victor Gatica, Jonathan Gulo, and Kaila Boulware.