HELMETTA, NJ—Sick animals, dirty cages, foul odors, and poor record keeping are just a few of the complaints that have been filed against the Helmetta Regional Animal Shelter.

Though the shelter is based in the county’s tiniest town, and controlled by the local government there, it is responsible for providing animal control and shelter services to 21 communities in Middlesex and Monmouth Counties, including New Brunswick.

One of those towns, Spotswood, has already notified the shelter that it will be terminating their contract.

Spotswood Business Administrator Dawn McDonald sent a letter to Helmetta officials to notify them that within the next 60 days the agreement to send Spotswood’s stray animals to the Helmetta shelter would be terminated.

But New Brunswick’s government is standing by the embattled agency, which is facing problems not unlike those that animal advocates have uncovered in the Linden Animal Shelter.

“City staff was there, they were there to inspect the place.  I think it was [Assistant Business Administrator] Russell Marchetta and the police,” said New Brunswick City Council President Rebecca Escobar.  “The shelter was found to be in a good condition.”

“We have no desire to send animals to substandard conditions, or to receive substandard treatment. We’re as concerned about it as everybody else is,” said Business Administrator Thomas Loughlin.

“The county health department has repeatedly inspected the facility and said it is free of violation and they are not closing it down in any fashion,” Loughlin continued.

But inspectors have actually found numerous problems at the facility in visits on September 26 and 30.  County health inspectors reported that the facility failed to isolate animals with communicable diseases, substandard cleanliness, and failure to document testing for contagious viruses.

Despite the findings, county officials gave the shelter a “conditionally satisfactory” rating after both inspections.

The New Jersey Society for the Prevention of Cruelty to Animals (NJSPCA) has also issued 6 warnings to the shelter.

The shelter first found itself under increasing scrutiny after Steven Wronko adopted a dog which needed $4,000 in medical services, and Wronko was promptly thrown out of the municipal building by an overzealous police officer and the town’s Police Director Robert Manney.

Wronko said he was trying to get information on the Helmetta shelter at a Municipal building, and video showed that he was unconstitutionally forced to leave by Officer Richard Recine, who claimed that he did not have to obey the constitution because Obama does not. 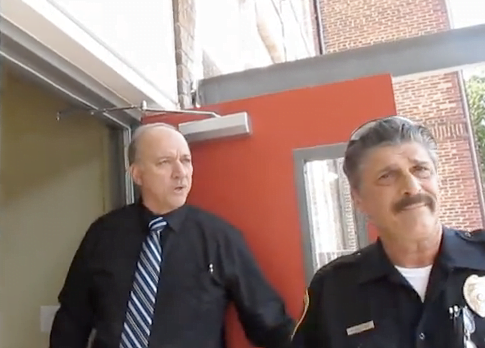 When Wronko explained how he was legally allowed be there, Officer Recline stated that the U.S. constitution is no longer in effect because, “Obama has just decimated the friggin’ constitution.”

The whole ordeal was recorded by Wronko’s 13-year old daughter, and the quickly sparked uproar nationwide.

Soon after the video went viral, Recine retired from the Helmetta police force, where he was known for giving out a lot of traffic tickets. He had previously spent 29 years as a Piscataway police officer.

In another incident, it was reported to the Middlesex Department of Health that a cat adopted from the Helmetta shelter was later diagnosed with Feline Leukopenia, a potentially life-threatening infectious disease.

In response to this incident, Lester H. Jones, the director of the office of health services for the Middlesex Department of Safety and Health sent a letter to the director of the Helmetta Shelter Michal Cielesz, warning that failure to comply with future inspections could lead to further action against the shelter.

Jones also stated that in the letter that any cat adopted within a 10-day period after the inspection on September 26 would be required to be medically examined by a veterinarian before the animal could leave the shelter.

Shelter director Michal Cielsz decided to “voluntarily” cease all adoptions from the shelter for 10 days after she received the letter.

The shelter was scheduled to hold a “free cat day,” which was canceled, according to NJ.com’s Vernal Coleman.