NEW BRUNSWICK, NJ–In a victory for citizens fighting against a controversial new building proposed for Mine Street, more than 130 people came to the August 12 Planning Board meeting, forcing officials to re-schedule it because the room was not large enough.

It was second time in as many tries that the Planning Board hearing had to be cancelled by officials due to overcrowding.

The meeting has since been re-scheduled for 7:30pm on October 14 in a larger venue: the Middlesex County Administration Building, at 75 Bayard Street.

The proposed project, a 52-unit apartment building, has drawn the ire of residents, Rutgers students, and union members, who accuse the company of undercutting their wages and hiring cheaper, often undocumented, workers to build the buildings.

Several construction sites in New Brunswick operated by its developer, Construction Management Associates (CMA), who also go by the name Premier Properties, were picketed over the past year by members of the Northeast Carpenters Union. 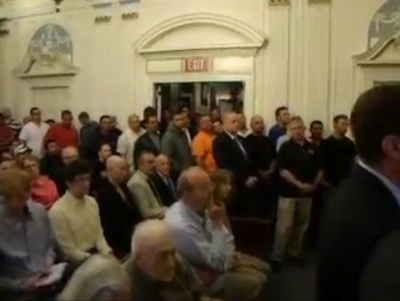 In May, the Planning Board’s attorney Ben Bucca cited a Fire Code violation and attempted to get project opponents to leave the meeting, raised the spectre of having police “force the people to leave.”

Bucca has since recused himself from the proceedings due to an ethics complaint filed against him by the author of this article.

After the overcrowding incident in May, the city’s Planning Director promised to find a larger venue, a promise he went back on after a secret deal was supposedly cut between the developer and the Northeast Carpenters that had opposed the project.

Instead, the city’s political machine scheduled the follow-up meeting for the same venue as last time, on the grounds that they had been told the union would back down.

But the city and the developer were dead wrong, and caught off guard by another overflow crowd on August 12. At that point, the powers that be, including a powerful attorney representing the developer behind the proposal, agreed to cut their losses immediately, proposing to reschedule the meeting for a larger venue.

But the most interesting revelation from the August meeting was an admission made by Thomas Kelso, an attorney who represents both the Middlesex County government and CMA.

In an attempt to explain why the venue had not been changed, despite an explicit promise from Planning Director Glenn Patterson to “find a larger venue,” Kelso disclosed that his client reached an agreeement to get a local union opposing the project to back down.

“Subsequent to that last meeting, [CMA President Mitch Broder] had an opportunity to meet with members of the Carpenters Union who made up a large part of the crowd who was here that night.  Based upon those conversations… it was [CMA’s] understanding that their would be no union member representation here this evening.”

“That information was relayed to the city,” said Kelso, a fact that was confirmed by City Hall spokesperson Jennifer Bradshaw.

“As the planning board was advised that the public likely to attend the meeting would be significantly less than in May due to the resolution of the labor issue, it was felt that the council chambers could accommodate the public for the meeting,” said Bradshaw, who is also a spokesperson for Mayor James Cahill.

Afterwards, a representative of the Carpenters Union said Kelso had inaccurately characterized their arrangement.

“Mr. Kelso misspoke,” said Kevin Brown, of the Northeast Carpenters.  “There is an understanding that if we take the picket line down, Construction Management Associates would entertain bids from our signatory contractors on future work.”

However, Brown confirmed he will not be in attendance at the October 14 meeting, citing another obligation