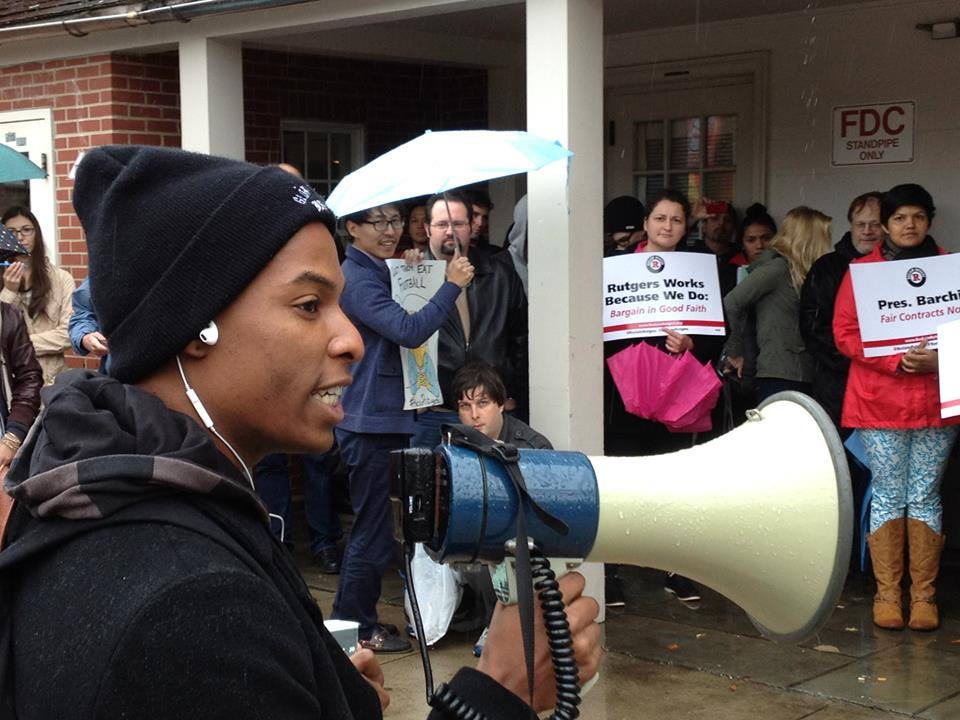 NEW BRUNSWICK, NJ–Hundreds of faculty, students, and staff gathered across the Rutgers campuses—all four in New Brunswick, plus Newark and Camden—to protest for fair contracts, and greater communication with the administration.

Including off-campus sites that Rutgers has control over, including its new medical school locations, the AFT-AAUP estimates more than 1,000 individuals took part in the actions Thursday afternoon, in 20 different locations.

On the College Avenue campus in New Brunswick, more than 100 people gathered for a rally hosted by the union-led "Reclaim Rutgers" campaign that culiminated in a march on Old Queens, the main Rutgers administration building.

The crowd of about 115 faculty, students, and staff marched down the street to Old Queens to demand Barchi’s attention, chanting “What do we want? Fair Contracts! When do we want them? Now!”

They were barred from entering the building by security, who declined to comment.

Amidst the chanting, students asked security if they could present Barchi with a letter containing their demands,  but instead ended up reading the letter aloud, in unison.

“We are here today because you, President Barchi, are inaccessible to the faculty, staff, and students that are affected by your decisions,” the crowd yelled.

Despite bad weather the protests drew many Rutgers workers and students to the array of locations.

The unions were supported by a strong student presence across all campuses, motivated in part by a group known as the Students for Shared Governance Coalition.

The protests came as Rutgers employee unions approach the five months since their contracts expired.

A bargaining session set to take place Wednesday was cancelled by the administration of Rutgers President Robert Barchi.

“Rutgers is about giving the students a quality education, and respecting the staff,” said Media Studies Professor Deepa Kumar, addressing the crowd at the College Avenue protest.

“Barchi’s administration does not share this viewpoint,” Kumar continued, adding that the top 79 highest-paid administrators at Rutgers make above $250,000, despite many adjuncts and part-time lecturers that often make less than the average NJ high school teacher.

Greg Rusciano, Director of URA-AFT and Lead Negotiator for URA (Union of Rutgers Administrators), was disappointed in the last-minute cancellation.

“We haven’t been given an explanation for the cancellation," said Rusciano, adding additional sessions are scheduled for November.

"We could iron out an agreement in one bargaining session if Rutgers really wanted to settle this in a fair way.”

Rusciano says that URA-AFT was taken aback by Rutgers reluctance to present any salary proposals: “We’ve been asking for salary proposals for five months… So far, Rutgers has not offered any.”

According to union reps, Rutgers' administration has been unwilling to put any proposal on the table that is fair and reasonable.  So far, Rutgers is offering a 3.75% raise over the next 3 years for faculty, with no raises for the rest of the school staff.

The management also wants to cut back on overtime, vacation, and sick time benefits for the Rutgers workforce.  They are also also reluctant to contribute to the increased costs of staff health insurance and proposing to end the popular policy of tuition remission, which gives free tuition to employees and their family members.

Tuition remission has afforded many Rutgers employees an opportunity to pursue degrees or put their kids through college at a time where higher education costs continue to rise.

These critical points of contention have helped attract widespread support for the union's position. 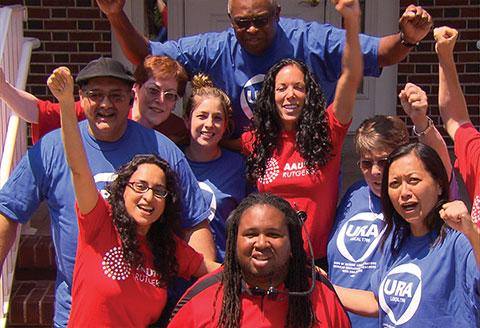 Eric LeGrand, a former Rutgers football player who was paralyzed in 2010, has joined with the unions to be a part of the "Reclaiming Rutgers" campaign, a sign of their growing support.

An image of LeGrand, an Avenel resident who has since become a local hero, was used prominently in literature promoting the protests.

A statement on the same page reads, "Teaching, research, service and patient care are the core parts of Rutgers' mission.  Stop diverting dollars from the core mission to subsidize athletics."

Meanwhile, the future of negotiations between Rutgers and its unions remain at a standstill.

The union proposed what they believe is a fair increase that takes into account the freezes that staff has had to endure over the past several years.

The pay freeze, which began in 2010, cancelled scheduled pay raises for staff that were already a part of the contracts between the union and university.

At the time, the administration of then-President Richard McCormick justified the freeze as necessary due to state budget cuts.  Since then, there have been bonuses given to non-union staff members since the freeze, but none to the thousands of union members.

The pay freeze, combined with increases in health insurance, has led union workers to see major decreases in their take home pay.

The "Reclaiming Rutgers" campaign was launched as a collaboration of the campus faculty and staff unions, working tohgether for fair contracts, as well as greater democracy and transparency from the administration.

Their work has been supported by another new coalition, Students for Shared Governance, which was formed "to draw attention to the lack of democracy and transparency at the University."

“As we work to Reclaim Rutgers, we want to reclaim the term Shared Governance because we believe that it is not truly practiced at Rutgers University,” said Sivan Rosenthal, a member of the coalition.

“If President Barchi and his administration truly want to improve the university, education comes first! This includes paying the faculty and staff fair wages.”

“When professors are working for such low pay, they need to stress over bills and food. How are they to focus in the classroom?”

Students and staff also want to meet with President Barchi on a number of issues and concerns.

The new student coalition dubbed "Where RU Barchi?" has demanded that Barchi hold weekly office hours, hold meetings with student organizations if requested, add student voting positions to the Board of Governors and the Board of Trustees, and that administrative offices remain on-campus.

David Hughes, a professor and union leader, spoke at a recent public discussion at the monthly Marc's Place Coffeehouse event in Highland Park about his concerns regarding corporatization of higher education.

Hughes said he was concerned with the arrangement Rutgers set up with online for-profit education provider Pierson Corporation.

Rutgers continues to increase its enrollment and embark on major new development projects, and it controls billions of dollars in assets and operates at an annual surplus.

These facts, combined with a recent raise and contract extension for the head football coach, leave many union members wondering why so little is being invested in the university's faculty and staff.

Ultimately, Hughes said it’s important for the University to have master teachers with respect and prestige representing the school. And that can be tough when there is not a good union contract, or in this case, no contract at all.

“With the surplus that they have, they are not replacing workers that have retired and, due to restructuring, some staff members are doing two people's jobs, all without fair compensation.”

“Members and students feel that Rutgers needs to spend money on things that are important such as staff, academics and research, not just athletics.”

If staff were to receive a five percent raise, it could cost Rutgers several million dollars, but as far as the union is concerned, it would be a drop in the bucket for the state university and its $3 billion annual budget.

While students continue to pay increasing tuition each year, the number of staff employed to assist them is shrinking.

“Rutgers has a large surplus of money, yet they keep increasing tuition and cutting back on staff benefits… That is not fair to staff or students because services provided are not as good as they should be.”

Though the recent cancellation of bargaining sessions has set back their cause, the Rutgers unions are hoping that negotiations can move forward more smoothly in the future, Rusciano said.

“The main thing is that we want this process to be over as quickly as possible so that the Rutgers workers can overcome these hardships.”