NEW BRUNSWICK, NJ—On October 3, the city's longtime Chief Housing Inspector resigned, after being suspended without pay for more than nine months following his arrest in a city vehicle that cops say contained a "distribution quantity" of cocaine.

It was one of the most bizarre "only in New Brunswick" stories when it all went down, and it continues to be today.

New Brunswick Today also got word that a raid had been executed on the New Brunswick Elks Lodge, where Mahony continues to serve as the organization's treasurer.

His arrest proved to be part of "Operation: Smoke Screen," a larger State Police investigation that also ensnared a New Brunswick landlord, a North Brunswick DPW employee, a Middlesex County Sheriff's dispatcher, and a business owner as far away as Cranbury.

Fellow employees and private citizens often complained about Mahony's conduct during his tenure.  He had been in office for nineteen years, and survived a federal investigation that sent two inspectors to prison on corruption charges in 2007.

"All of the original charges in Operation Smoke Screen are pending," said Attorney General's office spokesperson Peter Aseltine.  "They remain in force."

The city waited three days to announce Mahony's arrest, and included an ominous quote from Mayor James Cahill: "The City has been involved in a long term investigation, at the beginning of which, Police Director Anthony Caputo advised me could be far-reaching and have significant and serious implications."

Mahony was suspended without pay, pending an administrative hearing, from his $54,066 per year job supervising the city's staff of housing inspectors.  It is not yet apparent why Mahony gave up on his right to the hearing and resigned.

"I am told that no, he did not [give a reason for his resignation]," said city spokesperson Jennifer Bradshaw, who broke the story of Mahony's arrest as a journalist for New Brunswick's Patch.com.

“Let this serve as a clear and strong message that any illegal conduct by any and all city employees will not be tolerated and will be prosecuted to the full extent of the law," Cahill said. "As city employees and officials, we have one responsibility and that is to serve the public. Any deviation from this is unacceptable."

In January, Mahony resigned his position on the Citizens Recreation Committee, a small city-sponsored group of volunteers that meets at the city's Teen Center four times a year.  But that did not stop him from seeking re-election as the Elks Treasurer months later. 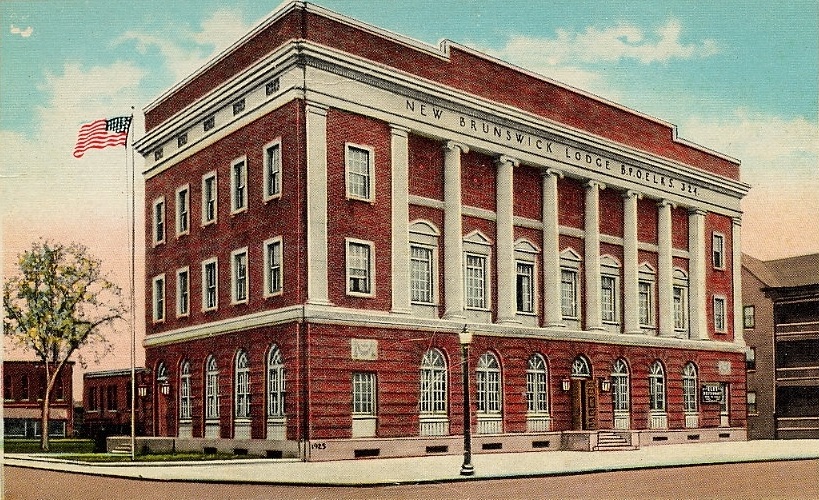 That's why it was surprising when Mahony narrowly won re-election to continue as the group's treasurer earlier this year.

The organization counts among its members many law enforcement officials and others in the political power structure.  James O'Neill, for example, the spokesperson for the Middlesex County Prosecutor's Office, has previously served as the organization's "Exalted Ruler."

"This is not our case," O'Neill said, referring questions to the State Police and declining to speak about the Elks organization.

On Memorial Day, Mahony was seen helping with the city's parade, marching alongside roughly a dozen Elks members.

Just a week after his resignation, Mahony was again marching with the Elks in a city-sponsored event: the Fire Department's 250th anniversary.