Not only has the City Council not approved the deal, but the decision to start charging for parking there may be a risky one, due to a deed restriction that says the city “shall forfeit all rights to [Buccleuch Park]” if the premises are ever diverted towards any use besides a public park.

One-hundred and three years ago, the City was given a huge gift by a man named Anthony Dey: the entirety of what is now known as Bucceluch Park.

At the time, the 78-acre estate was privately owned, but Dey wanted it to be preserved as a tribute to one of its owners, Colonel Joseph Warren Scott.  Ever since, it has been New Brunswick’s own version of a “Central Park.”

But there was a catch.

The deed explicitly says, “This conveyance is made and accepted upon the following express condition: That said premises shall be by the [City of New Brunswick] developed, maintained, and always devoted to and used for a public park in perpetuity, and for no other use of purpose whatsoever.”

This raises the question of whether turning the park into a paid parking lot, even for a few days a year, would run afoul of the 1911 deed, and run the risk of permanently giving up the city’s claim to the park.

Now, on the heels of Rutgers University joining the Big 10 athletic conference, New Brunswick’s City Council plans to vote on a plan to charge up to $23 to park within the park.

It is not clear how many spaces are for sale in total, or how NBPA enforcement employees will be able to tell the difference between football fans paying for parking and others who are simply using the park.

Just three days before the team’s first home game, New Brunswick officials are expected to vote on the proposed change at their public meeting 6:30pm on Wednesday.

The vaguely-named resolution, which has not been made available to the public, only reveals in its title that it would “limit and regulate parking” in Buccleuch. 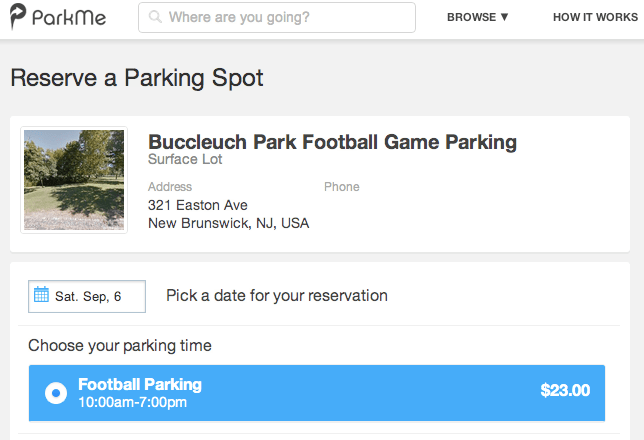 But apparently the Parking Authority is not waiting for the Council’s approval to start selling the spaces.  They are already for sale for the September 6 home game against Howard University, accoring to the online website ParkMe.com.

The NBPA, which is in nearly a quarter billion dollars worth of debt, is already using ParkMe to sell spaces in Buccleuch during the home games on Rutgers University’s football schedule, the first of which is scheduled for this Saturday.

As we reported last month, the NBPA also plans to charge the unorthodox gameday rate of $10/day to park at meters along College Avenue, which were previously free on weekends.

At least one resident who lives near the park is concerned that turning some of the park into hundreds of paid parking spaces, even for a few days a year, could run afoul of the deed restrictions and entitle Anthony Dey’s descendants to make a claim that the park should be turned over to them.

Bruce Newling, a retired professor who lives on Huntington Street, has successfully defeated plans to install a paid parking lot and a tennis bubble in Buccluech Park during his decades of residing in the area.

More recently, Newling fought against the expansion of a sewage pumping station in the park and held up construction for two years after it was determined the city had not been granted a required “diversion” from the state Department of Environmental Protection.

Because the city has been given money for Buccleuch from the state’s Green Acres program, any diversion of land from park use would require approval from the Green Acres administration, Newling says.

Newling penned an August 30  letter to City Attorney William Hamilton, and copied Rutgers President Robert Barchi: “I suggest that you seek the advice of legal staff in the Green Acres administration, concering the legality of assigning land in Buccleuch Park for use as a parking lot for the vehicles of patron at the upcoming football game,” he wrote.

The Parking Authority’s Executive Director Mitch Karon and city spokesperson Jennifer Bradshaw have not responded to questions about the questionable arrangement.

But an astute Twitter user who goes by the handle @LandingLane did get some answers from the NBPA’s official account over the weekend.

“Then why are tix still being sold on the Park Me website?” replied the user.

“Approvals pending,” was all the authority had to say in response.