A small group of students, roughly half a dozen at a time, watched over the flags. Counting the flags would reveal that a single flag had been laid down for each person who had died on September 11th.

The event, titled “Never Forget: 9/11”, had been running its third annual year since School of Arts and Sciences Senior Jacob Shulman started up the program.

A moment of silence was held for when the the two towers and the Pentagon were struck, the collapses at these three buildings, as well as the time at which Flight 93 crashed in Shanksville, PA.

During the first moment of silence, attendees all stood in a circle and spoke on where they were on the first September 11th.

Shulman had utilized the Facebook page to bring in support, recognition from local groups, and volunteers to help set up the event.

The event had come and gone within Rutgers. Other student groups held the memorial in years past, though there would gradually be more years where no organization held the event.

Shulman would be the first to take it up in a few years.

Meanwhile, a message was read aloud over the public address system at the Middlesex County Family Court, before a brief moment of silence.

“9/11 has had a tremendous impact on us all.  This changed much of the way that we live our lives.  Heightened security at airports is a simple reminder of that,” said a man reading the message.  “Things are no longer taken for granted, nor should they be.”

Despite a depressing start, the message had a positive outlook as well.

“As people and as a nation, Americans are always strongest when we are serving others,” said the man reading the message.  “Let us not dwell negatively on the impact of terrorism… Rather, let each of us go forth in service to one another.”

The run was organized by the Travis Manion Foundation, which seeks to offer aid and assistance for military veteran’s and their families.

Sunday’s 9/11 Heroes Run was one of dozens across the country, with others taking place in New York City, and Wall Township, NJ.

Of the 2,977 individuals who died in the September 11th attacks, approximately 43 were Middlesex County residents.

New Brunswick is also home to the headquarters of “Voices of September 11th”, an advocay organization which offers resources for survivors, victims families, first responders who were present at the actual day of the event, and emergency management planners.

In addition to the Albany Street office in New Brunswick’s Kilmer Square, the organization also has an office in New Canaan, Connecticut.

Being a national organization, there will be memorial services, though none of them will be in New Brunswick, or New Jersey for that matter, on September 11th.

The office has hosted a number of events and memorials in New Brunswick in the past, though none were held in the Hub City this year. 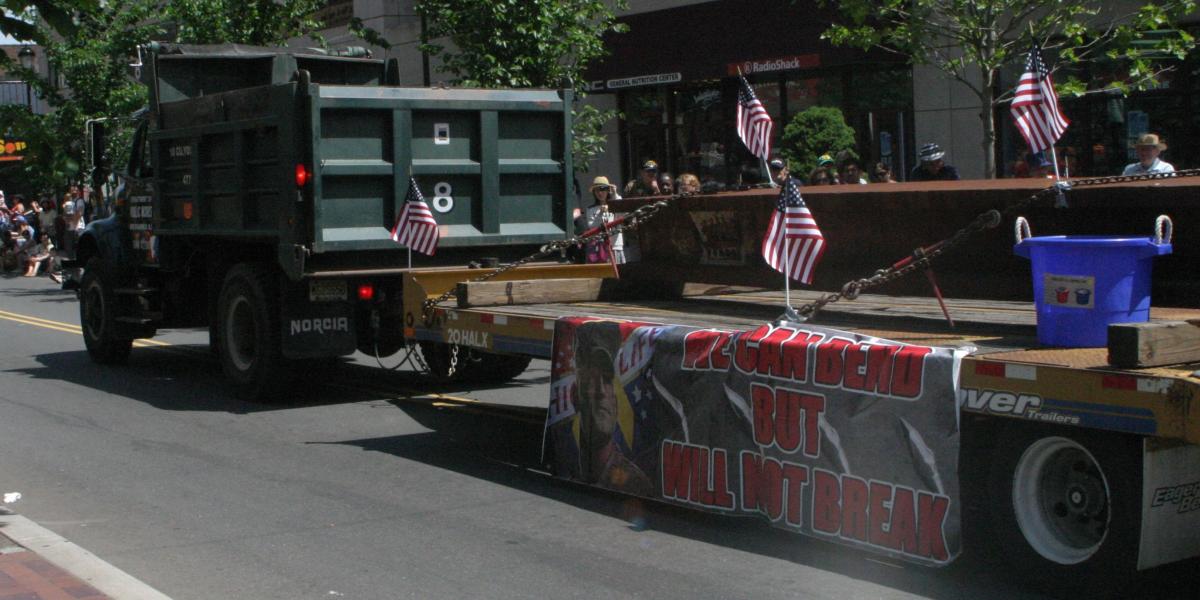 A piece of the one of the World Trade Center skyscrapers destroyed on September 11 is being stored in New Brunswick, but over the years city officials have not yet found a suitable location for it.

“The 9/11 piece of steel was obtained by the city about two years ago, through the efforts of a local retired firefighter,” said Jennifer Bradshaw, a spokesperson for Mayor Jim Cahill.

“It’s currently stored under a tarp in the DPW yard,” she said in an April 8 email.  “Discussions are ongoing as to how to properly show it off, via a momument. The city arts council is being tapped for input on how to properly display it in town.”

The steel girder was on display for the city’s annual Memorial Day parade earlier this year.