The event was attended by Republicans from across the state, including many candidates and elected officials who also took to the stage to give speeches, as well as members of the general public who could afford the $150 entrance fee.

However, New Brunswick Today was able to gain access by simply walking past security.

In introducing Christie, Romney was critical of his former opponent Barack Obama and the President’s recent foreign policy statements.

“Isn’t it extraordinary… that when Russia invades Ukraine, the president can’t get the word “invasion” out of his mouth?” Romney asked the crowd.

Romney also said that Obama’s economic policies had “made it harder for entrepenuers to invest in free enterprise.” 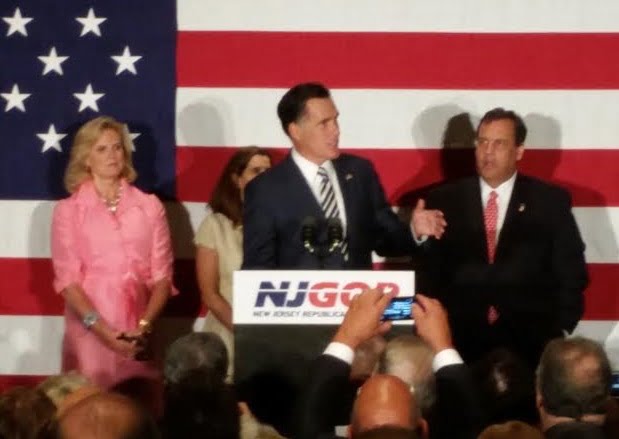 “The President doesn’t quite know what to do,” Romney said.  “And I gotta tell you, I am proud to be on the stage with a man who knows what to do.”

Christie, perhaps attempting to position himself as a candidate for the 2016 Republican presidential nomination, elaborated on an array of foreign policy issues, taking more hawkish stances.

“If you look around the world with all the challenges we face, with the Russians invading Ukraine, with Syria and ISIS, with Iran trying to develop a nuclear weapon, with Iraq in turmoil, with Afghanistan in turmoil, with Israel under seige without the type of support they deserve from the United States,” Christie began, concluding that Romney would have been a better President than Obama.

“Let me tell you something Mr. President: you were wrong, Mitt Romney was right,” said Christie, referring to Romney’s comments in a debate that Russia was America’s number one geopolitical foe.

At the time, Romney was criticized for the comments, prior to the Russian conflict with Ukraine erupted.

Christie was also critical of Obama’s domestic policy, and attempts to raise the minimum wage.

“We have a president in this country who does not understand that men and women, mothers and fathers do not aspire their children to earn a higher minimum wage, they aspire to have their chilren earn their greatest potential,” the Governor said.

Christie also mentioned his recent trip to Mexcio, saying he hoped to “bring jobs back to New Jersey, and to build bridges between our state and our country, and our neighbors to the south.”

“Really what they want more than anything else is to have the respect, the attention, and the partnership, with their neighbors to the north,” Christie said, citing his meetings with the Mexican President and other high-level officials.

“It became clear to me, with every meeting I had… every one of them told me how much they love our country, how much they want to be partners with us.”

As we reported, Christie recently took a three-day trip to Mexico along with a delegation of 15 New Jersey leaders, citing strong economic ties between New Jersey and Mexico.

“The Mexicans who live here in New Jersey, 50% of them come from the poorest state in Mexico: Pueblo… I shook hands with so many people, who told me, ‘We have brothers and sisters, aunts and uncles, cousins, who live in New Jersey, and they tell us how much they love it.'”

“There are lots of people who are saying: well jeez, what’s going to be next for the governor?” Christie told the packed room.

“I’ll tell you what’s next.  Tomorrow morning, I will wake up, get dressed, and go to work in the greatest job I could ever have possibly dreamed of: that’s being the Governor of the state where I was born and raised”.

Advocacy groups from different sides of the political spectrum staged sizable protests outside the entrance to the Hilton.

On one side of Tower Center Boulevard, the conservative New Jersey Second Amedment Society (NJ2AS) demonstrated for the release Shaneen Allen, a Pennsylvania mother facing five years in prison for carrying a firearm over the state line into NJ. 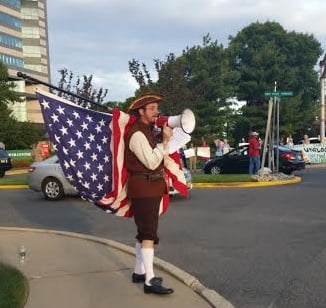 Allen was legally authorized to own that firearm in the state of Pennsylvania, but she unknowingly violated New Jersey law by bringing the gun across the border.

“We’re talking about a law-abiding citizen,” one protestor stated on a megaphone.  “She is now facing five years in prison for exercising her constitutional right.”

Another protestor, dressed as a soldier from the Revolutionary War, waved an American flag around.

On the other side of the entrance road, prostestors from labor unions and other left-wing organizations demonstrated against the Governor.

New Jersey Citizen Action sought to bring attention to the one-year aniversary of the Bridgegate scandal, where Christie’s administration closed down several lanes leading to the George Washington Bridge, allegedly to punish the Democratic mayor of Fort Lee.

“We’re here to call attention to the fact that he’s taken so much taxpayer money and flushed it down the toilet,” one protestor told New Brunswick Today.

Protestors for the consumer advocacy group Food & Water Watch held up signs calling on the Governor to ban hydraulic fracturing, a dangerous type of gas drilling also known as “fracking.”  Though fracking has not been attempted in NJ, Christie has twice vetoed a bill that would have banned the disposal or treatment of fracking waste within New Jersey.

Another protestor held up a sign depicting the Governor clad in hundred-dollar bills and a banner reading “Gov. Tax Waster, Happy Birthday!”