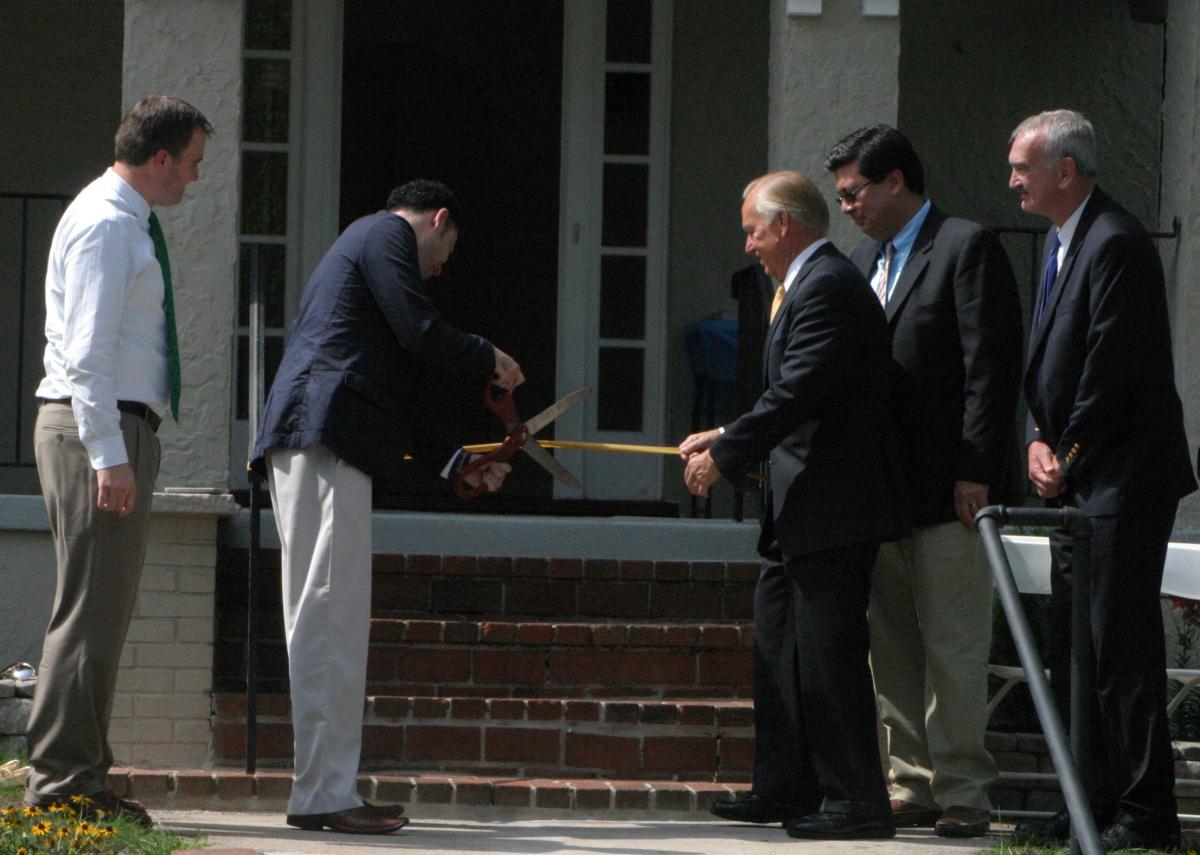 NEW BRUNSWICK, NJ—Once foreclosed and abandoned, a property on Stratford Place in the city's Fourth Ward has been renovated and sold to a popular man affiliated with the city's non-profit sector who says he looks forward to raising his family in the Hub City.

Jayme Santiago, New Brunswick Tomorrow's Director of Operations, became a homeowner for the first time this week after finalizing the purchase of 12 Stratford Place for a sale price of $265,000, according to the Community Asset Preservation Corporation (CAPC), one of several non-profits involved in a new initiative to revitalize a large swath of New Brunswick.

The Esperanza Neighborhood Project is an initiative to revitalize the neighborhood between Livingston Avenue, Somerset Street, including portions of the Fourth and Fifth wards of the city.

The neighborhood project is co-sponsored by New Brunswick Tomorrow, and CAPC, which is a subsidiary of the non-profit New Jersey Community Capital, and funded largely by a grant from Wells Fargo.

CAPC focuses on obtaining abandoned properties and working with local community organizations and construction businesses in order to renovate those said properties into affordable housing.

On August 20, New Brunswick Tomorrow, one of the Hub City’s many non-profit organizations, held a special ribbon cutting ceremony celebrating the first sale of a rehabilitated house within the Esperanza neighborhood.

At the event, Santiago, who also serves as the Partnership Coordinator with NJ Partnership for Healthy Kids New Brunswick, said the fact that he was the owner of the first rehabilitated house in the program was a "happy coincidence."

But some observers have raised questions about why the first rehabilitated home in the project was sold to a high-level official at New Brunswick Tomorrow, considering that organization's involvement in the project.

When contacted by New Brunswick Today, New Brunswick Tomorrow officials were hesitant to provide more information about the sale, despite participating in the highly-publicized ribbon-cutting ceremony.

"The ribbon cutting was to highlight the Esperanza Neighborhood Project and signal more potential rehab projects thru a joint collaborative between NBT, the City and CAPC, and not about the house, so to say," said Santiago, who declined to tell NBToday how much he paid for the home.

Asked to confirm the sale of the home earlier this week, New Brunswick Tomorrow Executive Director Jeffrey Vega said, "My employees are not required to share with me events that are personal. His house purchase is a personal matter."

But Vega, too, participated in the ribbon-cutting ceremony, complete with oversized scissors and a free lunch for those in attendance.

During his speech, Mayor Cahill stressed the importance of local development throughout the Hub City saying, "The literally thousands of houses that have… been rehabilitated, redeveloped, and energized neighborhoods is really what this is all about: providing opportunity, homeowner ship, a safe place for somebody to live and raise their family, and to energize neighborhoods."

Cahill stressed that, as a lifelong city resident, the neighborhood was a "stronghold" and that the project represented a new chapter for it.

The Esperanza Neighborhood Project is also supported by the New Jersey Department of Community Affairs and the Wells Fargo Regional Foundation.

Jeff Krum of the CPAC said that the project was made possible by the National Community Stabilization Trust, an organization that works to rehabilitate foreclosed homes and sell them to first-time homebuyers like Santiago.

Krum said CPAC did not make much money on the property, having bought it from Wells Fargo in February for $160,000.  He said that, in addition to "carrying costs," his organization spent $70,000 fixing up the home before selling it to Santiago for $265,000.

For his part, Santiago said he was excited to become a more permanent member of a community he has been working and living in for some time.

"I’ve been a part of this community for a little over a decade….. I’ve been working in different capacities with and for the residents of this city and from my time at Rutgers with the farmer's market and the food alliance to now New Brunswick Tomorrow… it’s been an honor.”