NEW BRUNSWICK, NJ — It never rained once during any of the ten annual 5K road races organized to celebrate the life of James D’heron, a Deputy Fire Chief who was killed in the line of duty after saving the lives of 15 people in 2004.

His family says it’s proof that the deceased local hero, “Jimmy D,” was watching over each of the events, which have raised tens of thousands of dollars for a charity that helps young burn victims.

On a bright Sunday morning, this year’s Jimmy D 5K was no different, having brought nothing but a great time for all involved.

One of the most popular 5K’s in the area, the 3.1-mile course both started and ended at Memorial Stadium, running along Joyce Kilmer Avenue and passing by the city’s firehouse where Jimmy D worked.

The day included a full morning of celebration inside the football stadium, including a shorter race for kids and a performance by the Middlesex County Police & Fire Pipes & Drums.

There was also plenty of free food, beer, dancing, music, and more for the 791 racers who finished, plus many more volunteers and spectators.

D’Heron’s daughter, Erin Varga, also serves as the race director.  She says the race is a lot of work, but it raised $20,000 for charity last year.

The massive amount of work involved is one of the reasons she has chosen to end the event after a decade of success. She says the day is also emotional, especially for her mother, each year.

After finishing the race herself in a speedy 24 minutes this morning, she lead the post-race award presentation with grace and gratitude.

Calling out the award for first-place female finisher ages 60-64, Varga reminisced about her experiences with a woman named Jane Parks, of Morristown, who finished in 22 minutes and 34 seconds.

“Nine years ago we decided to do this race and I got a call to meet this lady here to go look at the race course… plotting out the course for the first annual Jimmy D 5K.  So there we are up and down Joyce Kilmer Avenue… Blame Jane for the hills!” Varga said jokingly. 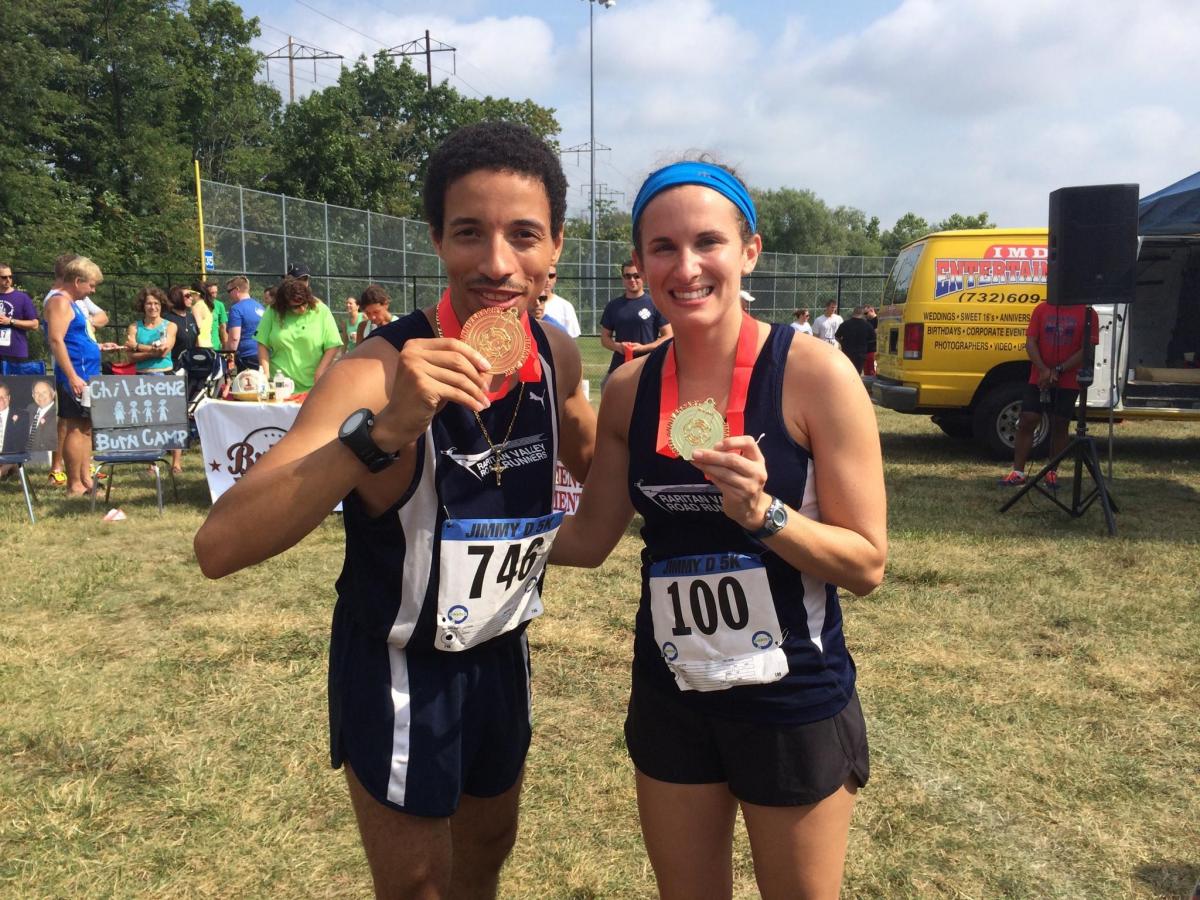 Official race results reflect 791 finishers, including 47 who listed New Brunswick as their hometown. The first, second, and third place female and male finishers in each age bracket (grouped by every five years) were awarded medals.

In addition to the five-year age group brackets and New Brunswick residents category, there were other special categories including Firefighters, Police, EMS/EMT, and Military.

Varga was grateful for all the support from the city’s Fire Department, which is preparing to celebrate its 250th anniversary next month.

“I just want to say thank you number one to the New Brunswick fire department. Support isn’t even the word — the past ten years, it’s been unbelievable…we could not have done it without them!”

Varga also thanked the city cops for helping with traffic control, the parks department for helping set up and break down, and local emergency medical personnel for standing by.

She acknowledged that there have been many others who have contributed to the success of the race.

“I would like to thank High Grade Beverage for always supplying the water, the beer truck — you name it, it’s been great. The fruit guy in New Brunswick that always donates the fruit every year, no questions asked.”

Still expressing thanks, Varga said: “The past few years my brother Jimmy who has been barbecuing all day. Thank you to Jimmy for not only getting the food but for cooking the food all day long.”

“I know I’m missing a gajillion people that need to be thanked — but everyone thank you — thank you all for coming out here every year.  Let’s have a great time.”

David Jasko, 41, a firefighter who finished in second place among male firefighters told NBT, “Erin has done a great job over 10 years of keeping her father’s memory alive while helping donate to a good cause for burn victims.”

“This was my first 5k ever and it’s been the race that got me in to running and I can’t express enough how grateful I am to be able to be part of such a great running experience,” said Jasko, who is also a member of the Raritan Valley Road Runners Club (RVRR).

“The course is great — straight out and back. The weather worked out great, nice overcast and no rain,” Pennyfeather told NBT.

“A lot of people came out to run, especially masters runners. Winning first place in my age group is an extra benefit. All in all, I’m honored to run a great race in honor of someone who gave his life for his community.”

Dave Hoch, 59, a resident of Bradley Beach and Shore AC Running Club member, finished 13th in his age group in 21:46.

Hoch told NBT that the race was a fine finish to the Jimmy D 5k series. Hoch said he missed only one or two Jimmy D 5K’s over the years and that he supported Varga for celebrating her father’s life, year after year, adding, “I hope someone continues this race going forward.”

Gresy Johnson, a 45-year-old female from Metuchen, told NBT she “felt great” after finishing in just over 25 minutes after coming off an injury: “Life is good. I am sad this is the last year this race is going to be.”

“Words cannot express the overwhelming feelings that this race brings to all of us,” Varga told NBT.

“My goal was a great race for great runners and at the same time to have the entire New Brunswick community and the fire service community involved,” Varga said.

“My father’s death was extremely difficult for my family and I wanted to turn this tragedy into something he would want — a day to remember the good and raise funds for burn survivors.”