NEW BRUNSWICK, NJ—Mayor James Cahill has appointed a longtime business partner of his to become the city’s Chief Municipal Judge for the next three years.

James P. Hoebich also serves as municipal judge for at least two other Middlesex County municipalities, Piscataway and Sayreville, and has previously served as a judge in South Amboy.

The New Brunswick City Council is set to vote Wednesday August 20 at 5:30pm on whether or not it would to approve Hoebich’s judgeship, which would take effect on August 31.

Hoebich would replace E. Ronald Wright, an African-American judge, meaning that all three New Brunswick judges would be white.

“I think that the Mayor tries to get some balance, but he’s gotta pick from the pool that he sees out there,” said Hamilton.

But Cahill did not have to look far or wide to find his choice to replace Wright. Hoebich is currently partners with Cahill in a a New Brunswick-based law firm.

Officials said that Hoebich expects to leave that firm and start his own on September 1.

According to city officials, the Mayor is proposing that Hoebich receive a $75,000 annual salary for being the chief judge.

Asked on a government form to give the name and address of “all business organizations in which an interest was held,” Mayor Cahill listed “Cahill, Branciforte, & Hoebich.” Cahill also indicated he earned more than $2,000, the threshold for reporting income, from the firm. 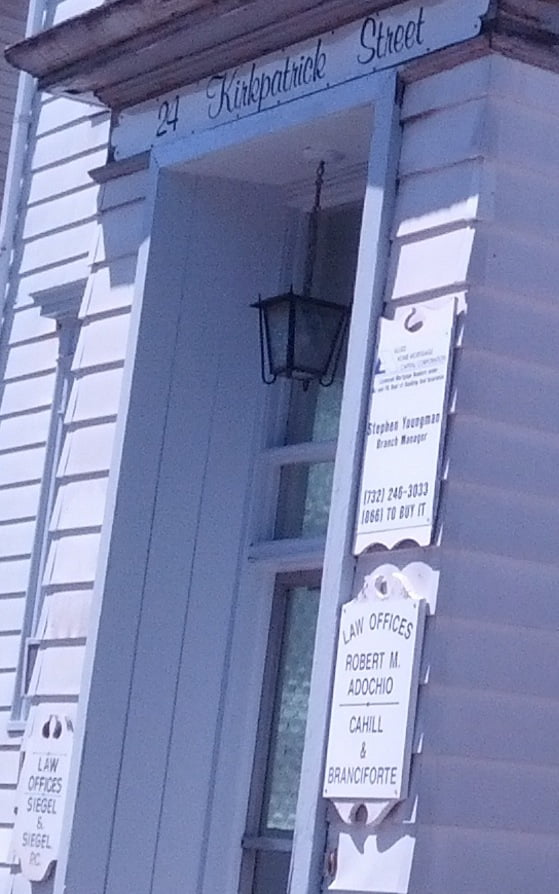 The firm has its offices located at 24 Kirkpatrick Street, across from the municipal court in the government district of the city.

A sign affixed to the building that once included Hoebich’s name now reads “Cahill & Branciforte.”

Hoebich is a graduate of Catholic University and St. John’s Law School in New York, and has been practicing law since 1996.

Cahill has been New Brunswick’s chief executive since 1991, and is currently running unopposed for re-election to the $40,000 job.

The Mayor of New Brunswick selects individuals to serve in various municipal posts, including the city’s three judges. The five-member City Council, which is allied with Cahill, almost always approves the Mayor’s selections.

New Brunswick’s three judges will oversee cases that are spread out across ten regular court sessions per week.