Community leaders scheduled a peaceful march starting at 7pm tonight, August 21.  The march will begin at 211 Woodbridge Avenue in Highland Park and travel along Route 27,  into the City of New Brunswick.

Entitled “Going the Extra Mile for Our Youth,” the march is being held “in response to recent actions of unprovoked violence across America to our citizens,” according to event organizer Ashton Burrell.

Bruce Morgan, President of the New Brunswick Area Branch of the NAACP, said his organization is “in full support of this effort and stands behind [Burrell] so rest assured this march is being done right.”

Morgan said Burrell is one of his “mentees,” calling him a “a great young man concerned about his local community as well as the greater community at large.”

On August 14, a peaceful gathering was held on the College Avenue campus to help raise awareness of the issues surrounding the killing of Brown and countless other unarmed African-American victims of police shootings, including New Brunswick’s own Barry Deloatch.

Deloatch was killed by a city police officer in September 2012, despite being unarmed and committing no crime. 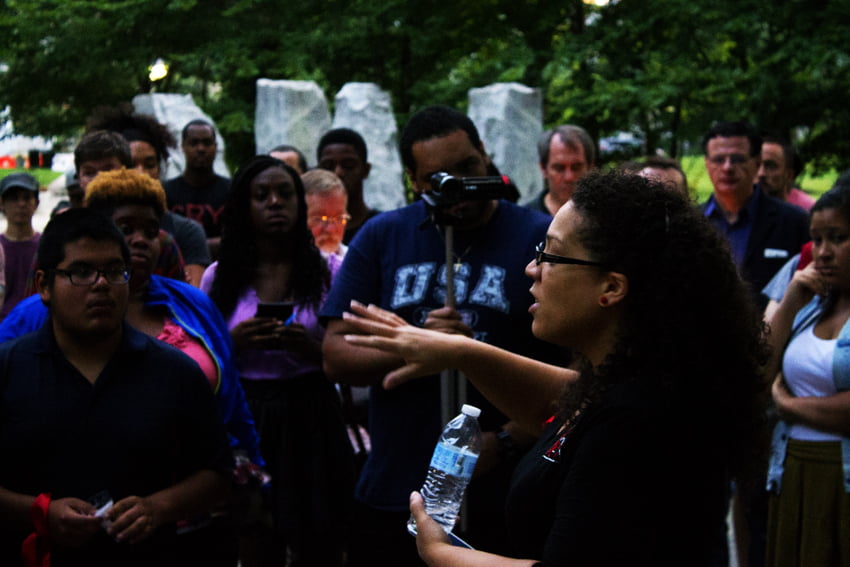 “Solidarity is an important part of the bigger picture,” explains Monique Porow, a Rutgers graduate who helped organize the August 14 vigil.

“When we stand in solidarity to honor the victims of police brutality, we establish that all lives have value, and that it is the responsibility of every American to take a stand against the rampant use of excessive and deadly force by police against minorities in this country.”

The event lasted a couple hours, and attendees were enouraged to speak their minds to the group in an open atmosphere. 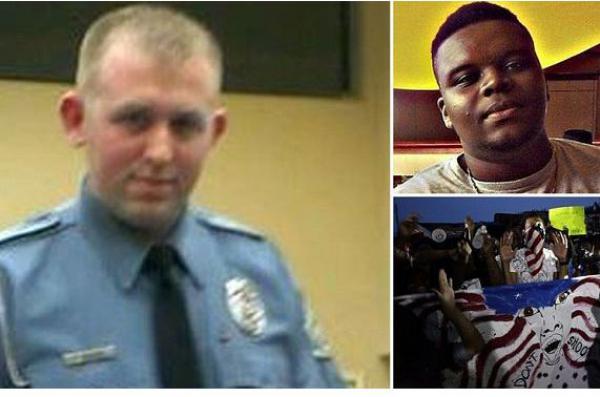 Tension between police and community erupted as Ferguson Police Chief Thomas Jackson delayed revealing the identity of officer who killed Michael Brown, later identifed as Darren Wilson, a white officer with six years on the force.

Meanwhile, vandalism and looting further instensified the conflicts, eventually leading Missouri Governor Jay Nixon to declare a state of emergency and impose a curfew that has since been lifted.

An independent autopsy conducted by the Brown family found Brown was shot at least six times including twice in the head.  A witness claimed Brown had his hands up when he was killed, but the autopsy could not corroborate or disprove those claims.

In conjunction with the release of Wilson’s identity, Ferguson Police released convenience store surveillance footage implicating Brown as a suspect in a “strong-arm robbery,” on the day he was killed.

But the owners of the store later said they never called in a robbery to authorities that day.

The release of the video was met with further outrage from many, who accused police of launching a “smear campaign” against Brown.

Amidst the controversy, the FBI announced it is investigating possible civil rights violations stemming from the incident.

US Senator Cory Booker, who represents New Jersey, recently asked Attorney General Eric Holder to “expand its probe to include a review of the unnecessary infringement of the protected right to peacefully protest and the right of a free press.”

At the request of Brown’s family, Holder has also ordered the Justice Department to perform a second autopsy. 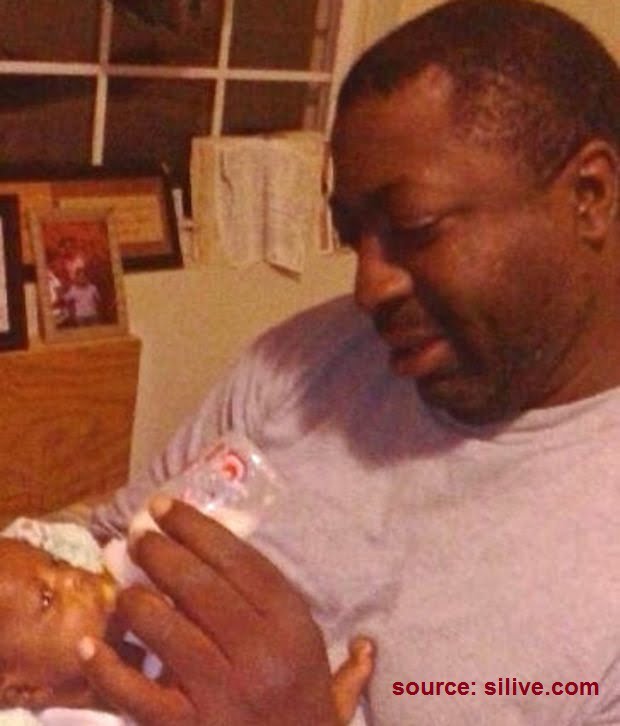 The national response to Brown’s killing speaks to larger issues of excessive force used by police, and disproportionately targeting minorities.

On July 17, 43-year-old Eric Garner died of injuries sustained after being put in a chokehold by a NYPD officer.

Garner was allegedly killed in an attempt to arrest him for selling untaxed cigarettes, but the brutal chokehold killing was recorded and posted online by a bystander.

The video of the arrest went viral and Garner’s death has since been determined a homicide by the NYC Medical Examiner’s Office.

The takedown method, which has been deemed illegal by the NYPD for 20 years, is apparently still in use by some officer, and was reportedly used on a pregnant woman in July.

A common theme arising from police brutality cases is criticism about the lack of citizen oversight and transparency within police forces. Although a Youtube video gained national attention in the Garner case, such shocking video evidence of brutality is often not available.

As a result of these cases, a conversation regarding the use of making videocameras a required part of a police officer’s uniform has been sparked once again.

Some areas have already used the technology, with positive results. For example, in Rialto, California, citizen complaints and police use of force incidents plummeted within the first year of implementation.

Since the Brown incident, the stock price of Taser, a company that manufactures police cameras and the electrical weapon of the same name, has increased 15 percent.

Also in response to Brown’s death, Hawthorne, California Mayor Chris Brown announced plans to introduce a city ordinance mandating the use of body cameras on all police.

“I am simply not willing to gamble with a single life, or the wrongful accusation of upstanding officers,” Chris Brown wrote. 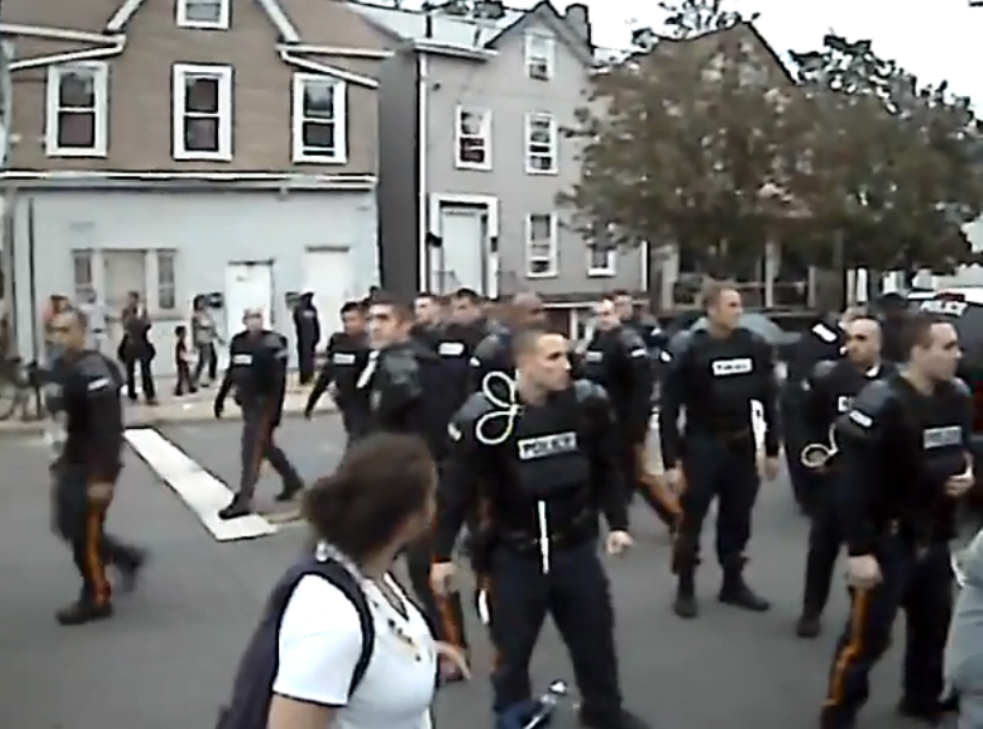 In September of 2012, New Brunswick police also arrested protestors and stifled the right to free speech in the wake of the killing of Barry Deloatch at the hands of Officer Brad Berdel, who later resigned after receiving 15 months of pay for no work.

Just days after the killing, a police officer who supervised the Internal Affairs unit of the New Brunswick Police Department was criminally charged with mishandling 81 cases against his fellow officers.

Mayor Jim Cahill quickly announced a new system for citizens to have their internal affairs complaints heard, but so far no one who has utilized the new system has been satisfied.

Noble Aaron El Shabazz had filed two official internal affairs complaints with the NBPD, both of which implicated the officer who would later kill Deloatch.

Neither the mayor nor the police department responded to Mr. Shabazz’s internal affairs complaints initially and even after the new process was announced, it still took two years for Shabazz to get a hearing.

Both his hearing, and McDougald’s, which took place earlier this year, were not audio recorded despite such a recording being required under the new rules.

Shabazz eventually got a ruling in his case, but former Judge Barnett Hoffman ruled that since Officer Berdel had already left office, no further investigation was warranted into the claims brought by Shabazz.

“My Queen and I would like to express our solidarity with the family of Michael Brown, as well as all victims of racist police brutality such as Eric Garner and countless others,” Aaron tells New Brunswick Today.

“We also express our support for all kindred-spirits of every nationality who firmly believe in justice for all and are willing to take a stand to try and make that a reality whether by protesting, lawsuits, boycotts, or by any means necessary.”

Both Mr. and Mrs. Shabazz are starting to become known as a New Brunswick power couple, searching for justice within an unjust system.

Both of them regularly address the City Council on what they see as a miscarriage of justice, making powerful speeches that point out the flaws in the city government’s logic.

“Honestly, for me, I am beyond marches,” Kalifa explained to New Brunswick Today.

“Please don’t get me wrong. I mean no disrespect to those who do march… Everyone makes a contribution in there own way and it all is appreciated.”

“We need to diligently demand they make change and that they start truly keeping the scales of justice even. We can not let up off of them,” Kalifa said.

“We need to be in their face every chance we get, demanding they take immediate actions every time… We really need our justice system to make some serious changes and start holding these police and other officals accountable.”