NEW BRUNSWICK, NJ—City officials have broken a promise to find a larger venue for tonight’s Planning Board meeting on a controversial development project planned for Mine Street.

The plans, which have been changed since the last time they were presented, call for a 52-unit apartment building on land that was once home to the Rutgers University Catholic Center.

Any person who wishes to learn more about the plans, or to make comments or ask questions about them, should attend tonight’s meeting at 7:30pm.  Parking is available behind the building, located at 78 Bayard Street.

But there’s no guarantee that the largest room in City Hall will be able to contain the crowd.

Officials may attempt to prevent residents from attending the public meeting if the room reaches its full capacity of 92 persons, raising concerns about potential violations of the Open Public Meetings Act.

“The fire official will be in attendance and will monitor the situation and make a decision depending on how the meeting progresses,” said Jennifer Bradshaw, a spokesperson for Mayor James Cahill.

But a lawyer with expertise in open government issues said this could pose problems.

“The Fire Code should not be used to deprive the public of their right to be present and give testimony at Planning Board meetings,” said Walter Luers, an attorney affiliatated with the NJ Foundation for Open Government.

According to the fire code, the Council Chambers can only legally hold 17 people at tables and chairs, which are typically reserved for government officials, as well as 61 people seated in the pew-like benches, and just 14 people standing.

As we reported, a hearing in April drew a large crowd and went on for three hours, before the board decided to call it a night, and allow for more testimony from the public at their next meeting.

In May, well over 100 were in attendance, but the meeting never got off the ground after City Hall’s largest room exceeded its legal occupancy.

The developer, Construction Management Associates, also goes by the name Premier Properties, and has been a target of protests from local trade unions for hiring nonunion workers and undercutting their wages.

They have also been generous political donors to New Brunswick Mayor James Cahill and his causes, including the campaign against having local school board elections. The city’s Planning Director, Glenn Patterson, had originally promised to find a larger venue for the meeting in front of an overcrowded Council Chambers on May 13.

“This application’s not going to be heard tonight… We’re going to figure out a larger venue for it,” said Patterson on May 13.

But Patterson, who earns more than $116,145 a year as the Planning Director, was singing a different tune last Friday when New Brunswick Today caught up with him.

“[The meeting] can be accomodated at City Hall. I talked it over with the Fire Marshall and so forth. I think it’ll be adequate,” said Patterson.

Asked if he made the decision to break his promise to the public, Patterson hesitated: “A bunch of us talked about it, and we think it can be handled there.”

Then, Patterson proceeded to criticize the ethics of this reporter for videotaping his statements.

“It is a little unethical on your part to just start walking up to people and asking them on the record questions,” Patterson said.

Pressed on whether the city was going back on their word, Patterson stopped short of saying he never said they would find a larger venue.

“I don’t think we said– We said we were going to look at it and we looked into it and had some conversations with the Fire Marshall and we’ll be able to work it out.” 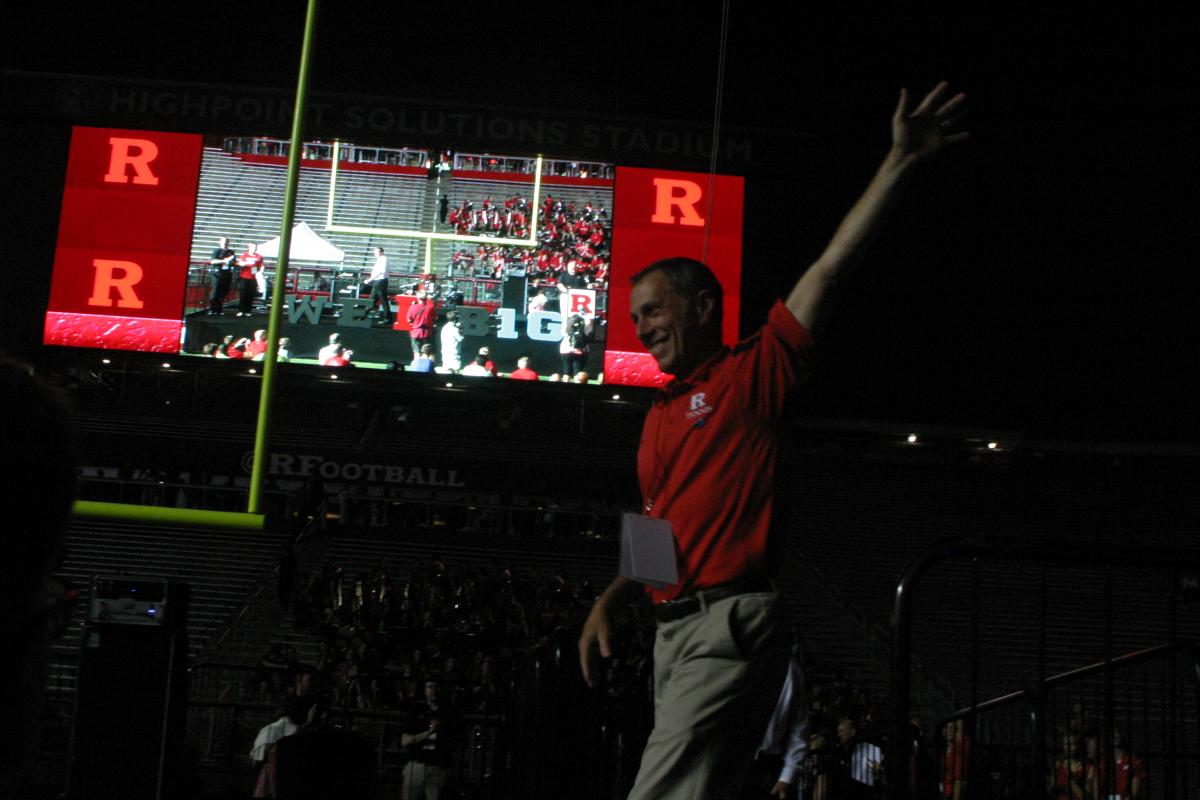 The decision to reschedule the meeting only came after an awkward and arduous battle between Ben Bucca, the Planning Board’s attorney, and residents there to protest the development plans.

Bucca, who also coaches the Rutgers women’s tennis team and holds two additional public jobs, began the night by telling the crowd, “We have a problem on our hands and we’re going to need your cooperation for this.”

Bucca then asked members of the public to “volunteer” to “forfeit” their spots in the room citing a fire code violation, and at one point raised the idea of calling the police “to force the people to leave.”

But by the time Bucca made the announcement asking the protesters to give up their spots, it was too late. The room had already exceeded its occupancy, and the protesters refused to leave.

When an attorney representing several residents opposing the project objected to the request that people volunteer to leave the public meeting, Bucca countered by asking a bizarre question: “Are you suggesting it would be productive to bring the police here and force the people to leave?”

“No I’m not suggesting that at all.  I’m suggesting to change the venue of this meeting to a place that can hold the number of people who are here for this meeting,” said attorney Peter MacArthur, drawing applause from the large crowd.

Eventually, the developer and his politically-connected attorney gave in.

“We would request that the application be carried so that the board can then fix another location for this meeting at its next regular meeting,” said the attorney, Tom Kelso, who also represents the county government at his day job.

Even after the developer had agreed to postpone the hearing to find a larger room, Bucca still gave the public yet another chance to leave the meeting “for the good of the hearing.”

At that point, the attorney for the opposition again objected and Planning Board Chairwoman Suzanne Sicora-Ludwig made the decision to adjourn the hearing.

Now, Bucca says he had nothing to do with the city’s decision to back down from the agreement to move the hearing elsewhere.

“Thats gonna be up to Glenn [Patterson],” Bucca said in a phone interview.

Asked if he was or was not the Planning Board attorney, Bucca responded: “Charlie, that’s a stupid question. You know what? I’m not gonna talk to you anymore.”

But Bucca continued to talk.

“I just feel that if I were to speak to you and I said the slightest thing wrong, you would cream me,” said Bucca, who has represented the Planning Board for years.

Bucca claimed to be unaware of the location of the upcoming meeting, even though it had been publically announced days earlier.

Bucca later refused to answer questions on the grounds that this journalist has “an agenda.”

“I don’t know but one is definitely there.  You seem to be sarcastic towards people.”

CONTROVERSY FORCED DEVELOPER BACK TO DRAWING BOARD 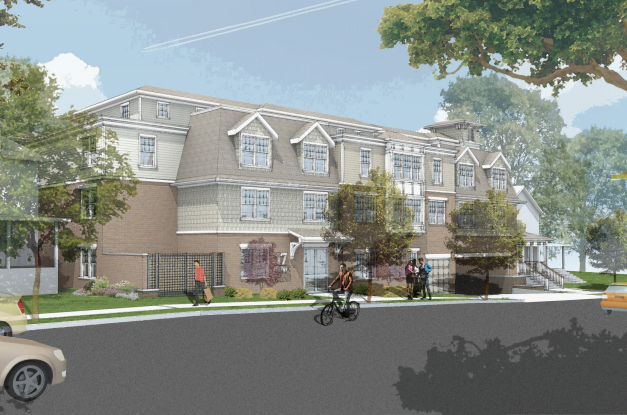 The project on the agenda, a plan for a four-story apartment complex on Mine Street near the Rutgers University campus, has drawn tremendous opposition and criticism over the past year.

Among the complaints from residents: the original proposal was too big and boxy, did not provide adequate parking, and would create a dangerous situation for residents and visitors thanks to unmonitored security cameras and  an underground parking deck that anyone could access from the street.

Additionally, the project is purported to be for the purpose of housing students at the Theological Seminary, but according to testimony at the meetings, there was no deal between the developer and the school in place.

Mitch Broder, one of Construction Management Associates’ two owners, told New Brunswick Today that his firm made “significant changes in direct response to the public comments” made at the April meeting.

The proposed building has five less units than in the previous design, but still requires a variance for the lack of adequate parking.

Broder declined to speak on the record about the venue for tonight’s meeting.

At the May meeting, Thomas Kelso, an attorney for the developer, said, “My client doesn’t want to be in a position where he is gong to be viewed as trying to somehow exclude the public… Under these circumstances, there is no good solution.”

Just across the street, the Middlesex County Freeholder meeting room is much larger and provides more plentiful and comfortable seating, and access for the disabled.

And Kelso is in a unique position to secure another room, thanks to his role as the county government’s official attorney.  Several times each month, Kelso participates in public meetings of the county’s Board of Chosen Freeholders in the room in question.

“There are other venues that are available… perhaps the County Administration Building across the street,” said Kelso.

“We know it’s not a perfect solution, but I don’t think there’s any way to accomodate the concerns the public is expressing here unless we [postpone and find another venue for the meeting].”

But he too was singing a different tune when NBT asked him about the lack of a change in venue.

“The City establishes the location of meetings not the applicant,” was all Kelso had to say when asked about the lack of a new venue for Tuesday’s meeting.

The Council Chamber is an ornate room, with columns flanking the barrier that divides the stage from the rest of the room.

There is just one public entrance and exit, located off the upstairs hallway in City Hall.

The chambers, built in 1926 along with the rest of City Hall, were pretty small to begin with. Decades ago it was made even smaller to accomodate the construction of a new office for the city’s Business Administrator.

The council chamber has gotten noticably dilapidated over the past twenty years, and in 2011 a leaky roof forced the City Council to hold one of its regular meetings in a nearby courtroom.

Editor’s Notes: Walter Luers represented the author of this article in a successful public records lawsuit against the City of New Brunswick earlier this year.

Richard Rabinowitz contributed to this article.