NEW BRUNSWICK, NJ—On August 5, residents gathered at outdoor events across the city to build community and meet the officers who police their streets.

The annual tradition, known as National Night Out, is an anti-crime event that takes place in many communities across the country on the first Tuesday in August.

New Brunswick hosted nine official NNO events, each one receiving a visit from a caravan of police officers and politicians, who were shaking hands with residents, posing for photos, and handing out pamphlets with information about a new program being launched called “Safe Watch.”

Officials said that as part of the new program, “people with special needs or their caretakers may voluntarily offer information to the police department to assist officers with providing aid to them in an emergency situation.”

Most of the events included free food and music, but the city did a poor job getting the word out.  An announcement posted on the city website and shared on Facebook the day before the events failed to mention their locations.

The festivities began at 5:15pm, as officials gathered in the parking lot behind City Hall. Mayor James Cahill rode in the back of police SUV #949 with Police Director Anthony Caputo, one of his closest political allies and one of the most controversial officials in government.

Bradshaw had previously ridden in the caravan while she was a reporter for New Brunswick Patch, but this was her first year as a member of the administration.

Despite asking in advance for Cahill’s agenda of stops, Bradshaw only let NBToday glance at it briefly before the group departed, setting out to visit nine different locations in three hours.

Embattled Fire Director Robert Rawls, who sparked controversy when he struck three children in a crosswalk while driving a city-owned SUV, was a passenger in Fire Department vehicle #21.

Rawls attracted media attention to the city’s political machine after the May 6 incident, which was later revealed to be the nineteenth crash of his driving career.

Gayden was criticized earlier this year when City Council voted to keep her in the role despite the conflicts of interest, and has continued to be criticized over her handling of two cases brought by residents.

US Congressman Frank Pallone joined the 20-vehicle caravan later in the evening.

CARAVAN VISITS EACH EVENT FOR LESS THAN 15 MINUTES

New Brunswick officials opted to visit the city’s nine events as a large group, rather that dividing up into smaller teams.

But due to a tight agenda, officers and officials were forced to spend 15 minutes or less at each stop.

The caravan arrived as the event hosted in Feaster Park was coming to a close, and stayed for just 10 minutes before the team returned to their assigned vehicles.

The tour began with two stops at senior citizen complexes: the St. Mary’s Apartments at 260 Remsen Avenue, and 116 Livingston Avenue.

There were more children at that stop and the police were able to interact with them.  They conversed with several adults as well.

After the police had left, residents of those apartments discussed their views on the New Brunswick Police Department.

They said it was okay that they had come.

Asked if they liked the NBPD, one person shrugged, saying that most of the cops are “alright, but there are about two or three that I have a problem with.”

Another teen said that he was grateful for the police: “What would we do without them if we get shot and don’t have their help?”

At nearly all of the events, tension between the police and community members were apparent.

Some community members said the large, sudden presence of many officers was a poor choice, and viewed by some as intimidating and counterproductive because officers stayed for such a short time.

Of the fifteen police vehicles in the caravan, most were unmarked and carried multiple officers. A fire truck, a school bus, and several more public and private vehicles rounded out the fleet.

Officers, many wearing dark sunglasses, stayed mostly with each other throughout the night.

Cahill, Caputo, and Rawls each wore polo shirts with no visible identification, making it harder for the public to recognize their roles.

John Anderson, a longtime resident of Suydam Street, was the only Council member who opted to wear a nametag.

LARGEST EVENT WAS HOSTED BY UNITY SQUARE IN FEASTER PARK 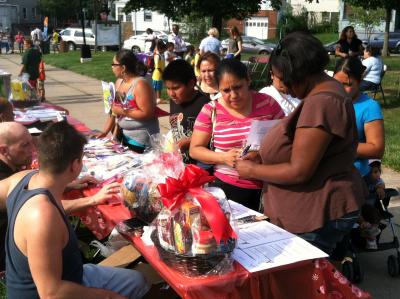 After a stop in the Raritan Gardens neighborhood, the caravan headed to Feaster Park for the largest of the night’s events.

Unity Square, a community organization and social justice initiative started by Catholic Charities, Diocese of Metuchen, organized the massive celebration that brought together 20 organizations and about 400 people.

There, information was dissemenated about various services offerred to the community, while kids played at an inflatable castle and danced to Zumba with a fitness instructor from the Robert Wood Johnson Fitness and Wellness Center.

Maria Vardas, who brought her four sons with her to the park said the event was a great opportunity for residents to learn about organizations in the community.

“Me and my nieces had a great time supporting the Hyacinth,” Gavin said. “It’s a great thing for the community to get together. We need to have more community events.”

“It’s kind of a mini-festival to celebrate the steps we are taking to build a safer and stronger community,” said Jason Rowe, the Director of Unity Square.

Some of the issues that Unity Square focuses on include crime prevention, wage theft, pedestrian safety and landlord abuse.

“The point of the event is to raise awareness to some of these issues but also to have a good time,” Rowe said.

Residents were able to receive free blood pressure and blood sugar screenings, as well as HIV testing. Other organizations focused on financial literacy or labor issues.

Before finishing the evening in the high-end Hiram Square neighborhood in downtown, the entourage paid visits to uptown’s Recreation Park, known locally as “Pine Street Park,” and to the New Brunswick Apartments at 33 Commercial Avenue, a crime hotspot that has made headlines recently.

Democratic Committeewoman Beverly Marshall helped to organize that event, which itself proved controversial because of at least two shootings, one week apart.

Marshall told the Home News that the management company that rents the 15-building complex feared that a gun battle could erupt at the event.

Though the management company, Housing Management Resources, may have threatened to cancel the event, the Homes News reported that Marshall refused to do so and it was a success.

Police brought along their “mobile precint,” to this stop and left it there.  The vehicle is regularly shifted to provide a stong visible presence in high-crime areas.

But the following night, tragedy befell a city police officer who was dragged for about 50 feet from a vehicle driven by a 24-year-old man who was arrested shortly thereafter.

SEAMAN STREET NEIGHBORHOOD HOSTED EVENT, BUT GOT NO VISIT FROM CARAVAN

Of the official events, none took place in the Sixth Ward, and just one each in the Fourth and Fifth Wards.

But four of the events were hosted in the Second Ward, the city’s largest and most diverse ward, and three were held in the First Ward.

At a recent City Council meeting, local activist Tormel Pittman asked the Council’s five members why his National Night Out drew no visit from city officials and their caravan.

Pittman has been critical of the city’s Mayor and Police Department, and lost a relative to gun violence earlier this year on that same block of Seaman Street.

“We got a lot of stops to make and we don’t have time to make it on Seaman Street,” Pittman said he was told by the department.

“We had nine stops on the agenda last night, we went to nine stops,” was all that Cahill’s spokesperson, Jennifer Bradshaw, had to say, claiming not to have knowledge of the event.

Bradshaw referred follow up questions from New Brunswick Today to NBPD Captain JT Miller, whose email address auto-response said he was “out of the office” and referred media inquiries to Bradshaw.

Pittman said he was disappointed in the police department’s decision not to attend, but one person at the event eventually convinced the Fire Department sent a fire engine down the block and “beeped the horn a few times.”

“The insult was this… In the entire day, not one officer got out.”

Instead, Pittman said the only police presence that evening was a squad car drove down the block after 10pm “just to stare at people.”