HIGHLAND PARK, NJ—Superintendent of Schools Tim Capone, whose short tenure was dominated by controversy, will soon be resigning his position as part of a mutual agreement reached with the town’s Board of Education (BOE).

Capone’s resignation was announced at a special meeting held Monday afternoon at 5:30 PM, nearly one year to the day since he was hired.  The resignation will take effect on August 31, officials said.

Under the separation agreement approved by the NJ State Commissioner of Education, Capone will receive a payout of $112,766, plus compensation for ten unused vacation days.

“The decision of the Highland Park Board of Education to enter into an agreement of separation with Mr. Capone was not an easy one, nor was it made without a thorough discussion of the financial and educational ramifications,” BOE President Dan Ross emphasized.

The resolution noted the Board of Education and Capone mutually determined it is in the best interest of the school district and of all parties involved to end Capone’s employment with the district. 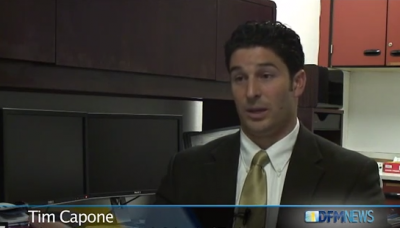 As we reported last December, Capone had left a job in Delaware after being demoted one year into his position as a principal there, only to find work in the NJ Department of Education and eventually Highland Park.

Hired under a four-year contract, Capone was supposed to have served as the tiny town’s superintendent of schools through June 30, 2017.

“The board spent a lot of time deliberating on this decision and determined it was the best course of action to pursue,” Ross aid.

The resolution was unanimously adopted by the six board members present.  Board members Gregory Dietz, Darcie Cimarusti, and Jerri Aversa did not attend the meeting.

Approximately 40 people, including members of the advocacy group Highland Park Cares about Schools, gathered in the auditorium at Bartle School awaiting the results of the board’s private deliberations.

In a press release issued in response to Capone’s departure, Highland Park Cares about Schools said they expect to see the district’s schools run “with transparency, respect for all opinions and concerns, and fiscal responsibility.”

They expressed the hope that the search process for the interim superintendent will be extensive, transparent, and inclusive of community input.

Capone’s term as superintendent saw a large tax increase in the school budget as well as the loss of four principals, the director of special education, assistant principals at the middle and high schools, and more than two dozen support staff, the advocacy group noted.

“We feel that the person chosen as our next superintendent… should reflect the long-standing priorities of our District: respect for teachers and staff; an emphasis on meeting student needs; and a commitment to education that values creativity, diversity, learning for learning’s sake, and each and every student,” group member Allison Salerno emphasized in the statement.

A flashpoint in Capone’s controversial tenure came when ten employees who worked in positions providing students with academic and emotional support had their jobs eliminated last December.

Ross said the board is not interested in reinstating those positions.

Building principals in each of the district’s four schools will assume control of their curricula in the wake of Capone’s departure.

“We are working hard to assure a smooth transition,” Ross said, noting additional information will be avaiable at the board’s next meeting on Monday, August 25.

A copy of the separation agreement will be posted on the Board of Education website next Tuesday, Ross said.

Capone’s payout will be funded by money budgeted for his own $151,000 annual salary as well as money the district is saving by not replacing former Assistant Superintendent for Curriculum and Instruction Michelle Calas, who vacated her position in July.

Calas, whose job was one of two new administrative positions created by Capone, had been paid an annual salary of $130,000. 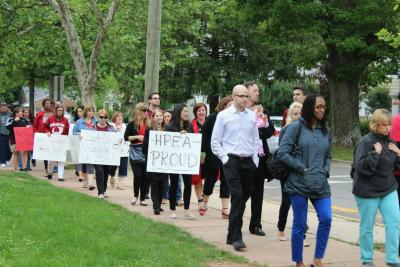 Kim Crane, president of the Highand Park Education Association described the year of Capone’s tenure as one of “enormous loss of services to our children.”

“We have much to do to put the district back on the path of educating our children in the manner Highland Park and the school community expects,” Crane told New Brunswick Today.

“We need to be diligent to make sure the initiatives passed in the past year are reversed and changed,” she stated.

It is not yet clear what impact Capone’s departure will have on the November school board election, where a slew of candidates are seeking three open seats on the board.

The three candidates who attended the meeting plan  said they do not plan to withdraw from the 10-candidate race as a result of Capone’s departure.

Michelle McFadden-DiNicola said she will “absolutely” continue her campaign, adding she wants to see the Board explain how this decision was made and use a more open process in future decision-making.

“It’s got nothing to do with him,” Rob Roslewicz said of his candidacy, adding he wants to see “some clear direction from the Board and open communication with the public.”

Candidate Anne Gowen echoed the call for transparency, describing Capone’s resignation as “such a difficult end to a difficult year.  We’re looking forward to next year being a lot better.”

Gowen said she wants to see the Board reach out to the community for input during the search for an interim superintendent.