NEW BRUNSWICK, NJ–On Friday June 20, the Second Annual Song Kitchen fundraiser and concert brought together food, fun, and music to benefit one of the city’s newer community groups making an impact on the city.

The event is a celebration of the efforts of the New Brunswick Community Food Alliance (NBCFA), which has just celebrated two years since its creation.

Fifty-five guests attended Song Kitchen 2014 raising over $700 for the alliance and  Elijah’s Promise, the city’s only soup kitchen.

Elijah’s Promise operates as a community soup kitchen that serves more than 100,000 meals per year, but it’s so much more than that.

With the support of volunteers, donors and community partners, the organization has opened up a culinary arts school, catering business, pay-as-you-can café, and assists families with social and health services.

On Friday, the facilities were converted into a concert hall where seven different performers graced the stage.

The Alliance All Star Band kicked the evening off with several selections influenced by blues and jazz including “Blues For Jeff” and “Living for the City.”

Each performer was involved in the alliance in one way or another.  Pam Johnson, the head chef of Elijah’s Promise, even sang several songs.

One of the highlights of the evening was Julie Cornell’s rendition of Jet’s “Are You Gonna Be My Girl.”

The Food Alliance even got the community involved with beverage donations from local business World of Beer and NBCFA members.

Part of what kept the energy going was the food provided throughout the evening.  The Elijah’s Promise Promise Culinary School offered up fare mostly consisting of Asian cuisine, with chicken and lo mein as the main courses. The dinner really showed off the level of quality that Elijah’s Promise puts into the meals.

With a nice juxtaposition of a modern song compared with the more soulful and bluesy music performed throughout the night, the band sounded great and the crowd really got into it.  Almost everyone in the room was clapping in time to the upbeat song. 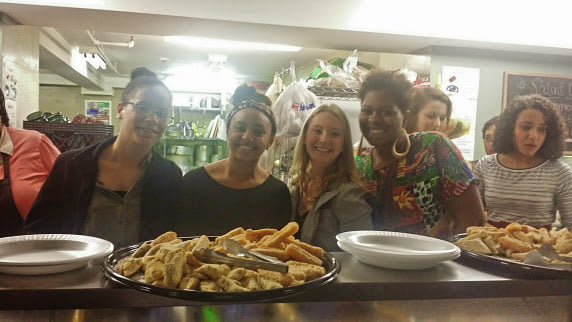 “It’s an amazing testament to the talent and dedication of NBCFA members: not only do we come together to work on food issues in the city but also to practice and share music and fun with the community.”

The funds raised will be used to help the Food Alliance continue its mission of increasing quality of life, and making New Brunswick a healthy community.

The NBCFA’s next general members meeting will be Monday August 11th at 6 PM, in the Community Room of the RWJ Wellness Center at 100 Kirkpatrick Street.