Dedicated runners traveled to New Brunswick from all over the state, as well as New York and Delaware, for the one-of-a-kind event.

“This is the only road mile in NJ. This is the only event where the mile is the primary and only event. I think it’s one of the reasons you see so many competitive guys out there – because they want to do it – it’s an exciting unique event,” said Chuck Schneekloth, race director and president of local Garden State Track Club.

Runners competed in a total of thirteen heats. The heats included both individual and relay competition on a flat and fast, two-lap course that encircled the College Avenue Gym and Rutgers Student Center.

Additionally, a USATF grant allowed kids 14 and under to compete in the Youth Mile free of charge.

Schneekloth told New Brunswick Today that they were happy to see both increased participation and improved performance (over last year) from the runners.

“This is the third year we’ve had the event but it’s the first year it’s been on the USTF-NJ championship series, so that resulted in pretty much doubling the size, and almost every event record was broken,” said Schneekloth.

“So it was nice to have both the quality and quantity of the event improve over the past two years,” he said. 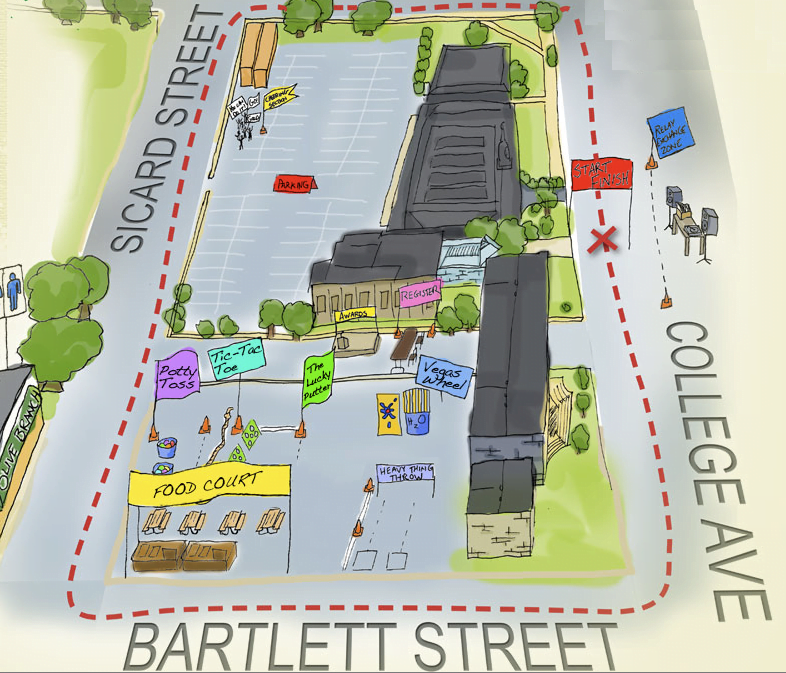 A range of family-friendly activities were installed on-site and offered in the “Fun Lot” section. Some of the activities that kids took part in included carnival table games, wheel games, and the water balloon toss.

Kids took advantage of the activities and had a great time while waiting for their parents to race, or after competing in their own one-mile heats.

“The idea is that we want to create a family environment for the kids and for the parents and everyone else who just wants to run. So that was why we had all that fun stuff there,” said Schneekloth.

Schneekloth said he was grateful to the entire New Brunswick community for supporting the event including Doug Schneider, owner of the Olive Branch, the event’s primary sponsor, New Brunswick Police Detective Mike Debeonis and his police officers, and Rutgers Dinning Services.

He said that New Brunswick special duty police officers really went out of their way to make the event go nicely.

“I think often races are just races and not community events and our goal all along is to make this a community event and I think we took another step forward with that yesterday.”

The first heat was the Elite Women’s Race, followed by the Elite Men’s Race.

The event awarded a total of $900 in prize money to the first, second, and third place finishers in male and female categories.

South Plainfield resident Tim Morgan, 30, is a member of the Raritan Valley Road Runners Club (RVRR) and the Garden State Track Club (GSTC). He told New Brunswick Today that he had a personal connection to the area and the race had significance to him because of his memberships in the two clubs.

“Even though I don’t live in New Brunswick personally, this area has significance to me on a personal level; I never went to Rutgers either, except for two summer courses that I took,” he said.

“But there is a personal connection to the area (and race) because of my running career and relationship with RVRR and GSTC.”