NEW BRUNSWICK, NJ—The Zebras of New Brunswick High School have turned in their most successful season in boys tennis since the team was re-established ten years ago.

The Zebras, a team with no seniors, finished fourth in the Greater Middlesex Conference (GMC) blue division after winning five regular season matches.

New Brunswick swept their series with South Amboy by scores of 4-1 and 3-2, and finished the season with a winning home record of 4-3. The New Brunswick boys also defeated South River, Spotswood and Middlesex for its other three victories this season.

Junior co-captain Jonathan Martinez, who ended the season on a four-match win streak, went 9-8 overall and 8-6 in division play, finishing fourth in the GMC at first singles. Meanwhile freshman phenom Miguel Lugo had a 2-0 record in three set matches and the second doubles pairing went 3-1 in tiebreaks.

For his outstanding play this season Martinez was selected to the (GMC) All Division – Blue Team by coaches from around the county. The junior the first Zebra to earn such honors since Lopburi ‘Top’ Sasinin last did it in 2010, said Zebras head tennis coach Mike Mitchell. 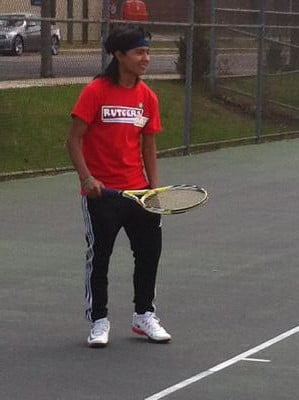 “Johnny works hard and he’s becoming more passionate about what he does by the day. He’s also proving to be a true leader for the others, which has been missing for years now.”

The junior also ended a three-year winless drought in the team’s first singles position by the team. Martinez will be presented with his certificate at the Athletics Banquet later this month.

In the 2nd annual “Zebra Challenge,” an intra-squad tournament, Martinez was the top seed and went on to defeated second-seeded Abelardo Cruz in straight sets 6-1, 6-1 in the final.