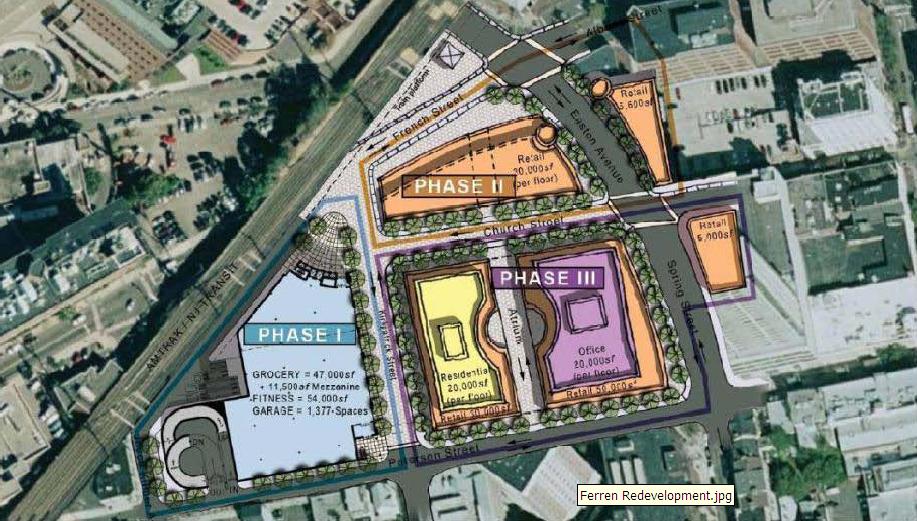 NEW BRUNSWICK, NJ—As the final storefront in Ferren Mall closes, the powerful government agency that owns the vacant structure has entered into an agreement with a developer to market their prime real estate.

On the April 21 New Brunswick Parking Authority (NBPA) Board of Commissioners meeting, the board approved an exclusive marketing deal to let the New Brunswick Development Corporation (DEVCO) recruit tenants for potential large-scale developments on the large site.

The nonprofit developer released an announcement on Facebook earlier this month, with three images showing a 1960's-style office compound on the site of the largely vacant parking garage and commercial space, located across from the New Brunswick train station.

Over the next 12 months, DEVCO says they will spend approximately $100,000 in marketing the site, and would in exchange be exclusively authorized to interview developers, tenants, and investors for up to 18 months from the date of the agreement.

The development corporation would be able to apply for financial resources, though only at the discretion of the NBPA Board of Commissioners, who will have the final say on any development proposals made for the site.

Released in June 2014, "New Brunswick: An Award-Winning Transformation" outlined more details of the initial redevelopment proposal, which has been in the works for years.

The renderings show a courtyard surrounded by a complex of highrise buildings, but have already drawn criticism for being walled off from the sidewalk.

Plans also call for underground parking and a public space that would connect Albany and Paterson Streets.

LATEST IN A LONG LINE OF PLANS FOR FERREN

Over the past decade, redevelopment plans have come and gone for the Ferren Mall site including a basketball arena for Rutgers University and a corporate headquarters for Black Rock.

One such development proposal was the CORE (Commercial, Office, Research, Entertainment) Vision Plan, which Mayor Cahill unveiled more than a decade ago.

CORE included a lengthy wish list of proposals meant for the downtown area. Among them were plans to"demolish Ferren Mall and parking deck and replace it with a 500,000-square-foot tower of 30 or more stories that could house corporate headquarters, retail and parking."

Despite the optimistic view of city officials, many of the plans were never realized.

Black Rock ultimately decided not to build in New Brunswick, instead selecting West Windsor as the site of their new corporate headquarters.

Plans for the Rutgers basketball arena surfaced in 2007, but never materialized.

Some had called on plans to improve the intersection of Easton Ave and French, Albany and Spring Streets. Critics pointed out that the DEVCO renderings being marketed  did not include any plans for that intersection.

END OF AN ERA FOR DOWNTOWN CENTERPIECE

One of the centerpieces of the city's initial wave of redevelopment plans, the Ferren Mall and parking garage provided parking to hundreds of vehicles each day and retail space for tenants like the Rutgers University bookstore and McDonald's.

But in recent years, the building has slowly depopulated as the New Brunswick Parking Authority carefully replaced the services it offerred with nearby facilities.

The McDonald's space closed nearly a decade ago, and has largely been vacant since.

The building's other anchor tenant, the college bookstore, closed its doors in August 2012, part of a Rutgers deal to switch to Barnes & Noble as the school's official bookstore and move into a new, much larger space in another NBPA building.

Two longtime Ferren tenants, PNCBank and a small convenience store, also relocated to the ground floor of the same structure, a 22-story highrise known as the Gateway building.  It also includes a 656-space NBPA parking garage.

The Parking Authority moved its own headquarters from the Ferren Mall to the 6th floor of the same building in 2012.

Eventually, other popular spots like Marita's Cantina and the PSE&G customer service center left their longtime home in Ferren.

Adjacent to Ferren, the Parking Authority built another even larger garage, which also included space for the Robert Wood Johnson Fitness and Wellness Center, and the now abandoned FreshGrocer supermarket.

With the opening of that garage, the authority took the opportunity to permanently end public parking in the Ferren deck, as we reported in January 2013.

Still, some businesses kept opening in the mall, including a diner and a Korean chicken restaurant, only to go out of business quickly.

In its later years, the old bookstore space was used for some creative purposes: first, as a hiring and training center for theFreshGrocer's workers, and then later as the state campaign headquarters for the "Barbara Buono for Governor" campaign.

Neither operation proved to be successful.

TheFreshGrocer was permitted to use the 1,500 square foot space for no charge, and ended up owing the NBPA $1 million when their store closed 18 months after opening.

Buono's campaign headquarters paid a monthly rent of just $1,000 with no security deposit.  She lost to incumbent Governor Chris Christie in November 2013.

THE BIRTH OF THE FERREN MALL

The Ferren mall and parking garage is actually two different buildings  First, the modest John E. Ferren parking garage was built in 1972, largely to aid commuters who needed to park close to the city's train station or the county courthouse.

In the ensuing decade, the city went through major changes as it struggled with a declining economy and many businesses left the city for booming suburbs in the surrounding area.

Johnson & Johnson, which had its headquarters in New Brunswick since it opened in 1886, threatened to move out of the Hub City.

Ultimately, Johnson & Johnson decided to remain in the city. The company eventually built a new corporate headquarters, a move which by itself displaced several businesses.

Their efforts to revitalize the city also resulted in the creation of two nonprofits, New Brunswick Tomorrow and DEVCO. From this, government leaders embarked on additional ambitious plans to redevelop large parts of the downtown; areas between Albany and New Street.

The city government used the controversial power of "eminent domain" to evict  around thirty small businesses and more than double the size of the Ferren parking facility.

The new structure included retail stores along Albany Street and was built to hang over a block of Church Street, connecting it to the original 1972 structure.

"The original concept of the building was to park, grab a coffee, and hop on the train and head to work," Mayor Jim Cahill told the Wall Street Journal.

Taking a cue from Penn Station in New York, the powers that be selected a familiar address for the building: One Penn Plaza.

Before Ferren Mall, the RU Book Store was located in Records Hall on College Avenue.  Though the decision to move the store was not popular among students, during the years that the store operated in downtown, it would end up attracting Rutgers students and their purchasing power to the struggling area.

Individual small businesses which were located at the site of today's Ferren Mall included The Art Cinema, the Cone Zone, New Brunswick Lunch. More broadly, the Golden Triangle, which consisted of Ferren Mall and other prime real estate, consisted of The Rubber Room Rehearsal Studio. Each fell way to condemnation as part of eminent domain, the legal process for taking private property.

Wendy Hughes, who was an owner of the Rubber Room, had been given compensation and a list of places she could relocate to, though none of those were sufficient.

"I relocated quite a few times, I ended up in a really bad neighborhood, I got broken into a couple times" Hughes mentioned.

Many other businesses were evicted to make way for the NBPA project.  Many owners were dissatisfied with the amount they received from the city.

Still, New Brunswick government authorities had utilized agressive tactics in the past when taking private property in pursuit of its redevelopment projects.

"If potential relocation should stop us from future redevelopment, we'd get nothing accomplished," said Mayor Cahill in an 2002 interview with the Home News Tribune.

According to a 2003 article by the Star-Ledger's Alexander Lane, the city had forced businesses to close up shop or relocate more than 66 times since the 1970's.

An excerpt from the article details the difficulties faced by some:

Most business owners interviewed remained resentful of relocation even years after the fact, bitterly recalling months out of work, steep drop-offs in their customer base and scant communication from the city.

Of the 66 business that have been entitled to relocation assistance because of redevelopment, 33 opted for a "going-out-of-business" payment, city records show. Of those that did choose to attempt a move, several said relocation doomed their businesses.

"It ruined us," said Don Pellicone, 82, the former owner of the Elizabeth Beauty Supply shop, which was moved down George Street to make way for the Golden Triangle office building in the early 1980s. "We opened up again, but it was never the same."

Even some relocations known as success stories were far from smooth. Jack Blauvelt, the owner of Jersey Subs – a George Street sandwich shop that remains vibrant despite a one-block move to make way for the Liberty Plaza health care administration building in 1996 – said the city paid him a fair price for his old property only after he hired an aggressive, expensive lawyer. He said he was too "worn out" by the process to ever try recovering his full moving costs.

His new shop is smaller than the old one, and fills up too quickly. Revenues have been largely stagnant since the move, Blauvelt said.

"It was really hard to talk to anyone from the city," said Blauvelt, 51. "Their technique is really rough on people."

Sources say DEVCO is still looking at two possibilities for the development: one that would include the demolition of seven Paterson Street buildings in the project, and one which will only take Ferren, and build around the seven other structures on the block.

Seven low-rise buildings on Paterson Street would be effected should DEVCO decided to develop over the entire block. Three of the properties, including the buildings that house Onyx Barber Shop and Clydz restaurant, are owned by a landlady named Catherine Patakis.

Patakis did not respond to calls or inquiries regarding whether she was aware of the NPBA-DEVCO deal, and what she intends to do with those three properties.

Recent court decisions have made it harder for a building to be seized if the land were intended to be used for private companies.

Some of the other property owners, mostly lawyers who work out of their buildings, were in no hurry to sell.

"I'm not going to even think about it until it's more concrete," said one attorney who owns his own law office on Paterson Street.

If the buildings do get bought out by a developer, and the land acquisition process is anything like it was or the adjacent Wellness Center, it is likely owners will be offerred far more than the assessed value of their properties, which totals $2,138,900.


To many of those working on Paterson Street, the talks of redevelopment at Ferren Mall were old news.

One worker at Clydz had said that ever since he had been working at the resturaunt in the 1990's, there had been talks about redeveloping that area.

A worker at Onyx Barbershop, who had lived and grown up in New Brunswick, also said that development at Ferren Mall had been discussed for some time.

Onyx owner Allan McGriff said he was "shocked" his barber shop at the corner of Spring and Paterson hadn't already been taken over considering the large redevelopments surrounding it.

John C. Sinuk, a lawyer who shares ownership of 71 Paterson Street with two other attorneys, also mentioned that talks of developments had been in the work for some time.

"I was expecting something to happen.  I knew it was gonna happen, but I didn't know when."