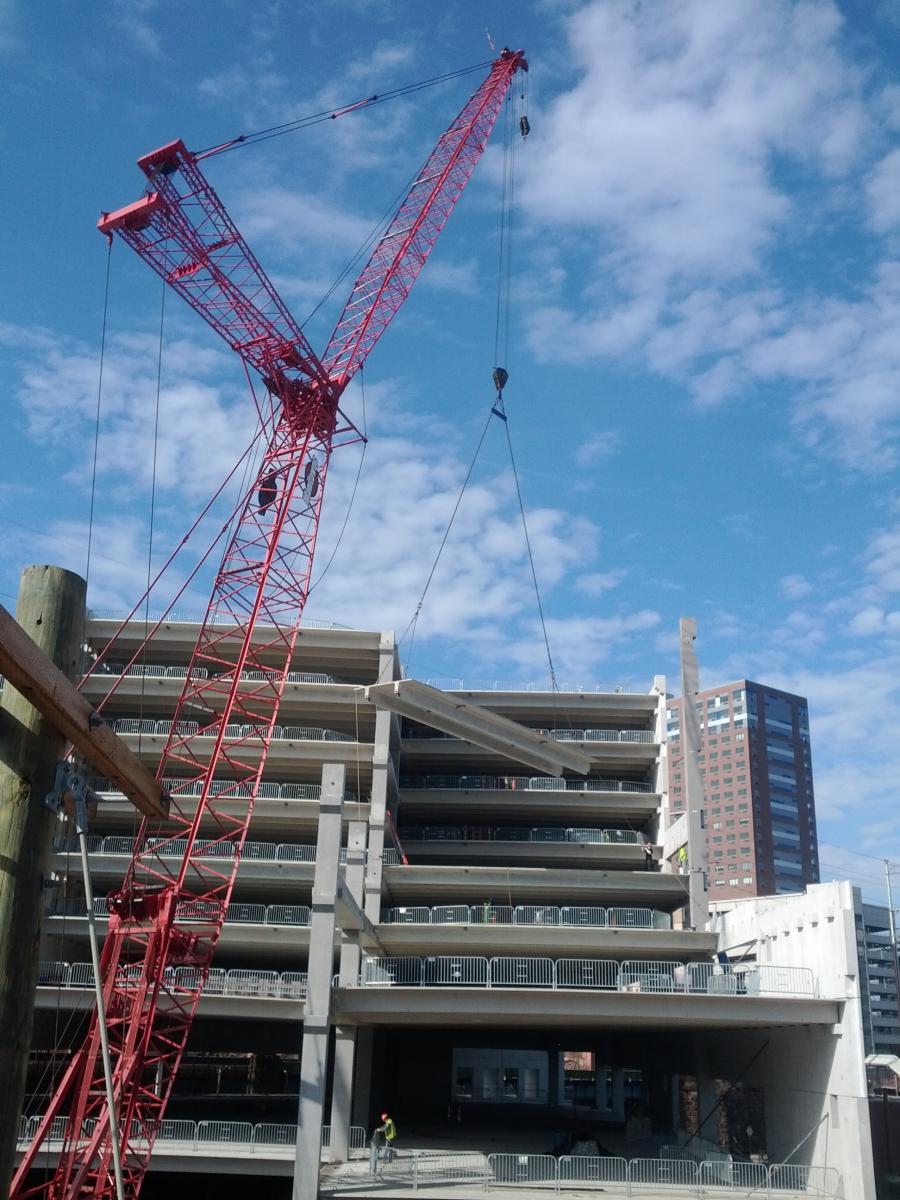 NEW BRUNSWICK, NJ—The same year that Mayor Jim Cahill announced plans for a new "Wellness Center" in downtown, a national credit rating agency downgraded the city's rating, expressing doubts about that project and another one involving the same players.

Now, four years later, as Cahill runs unopposed for re-election, a 50,000 square-foot supermarket built on the ground floor of the Wellness Center sits vacant after the Pennsylvania-based FreshGrocer chain cut and run on the city after just 18 months in business.

New Brunswick Parking Authority (NBPA) acts as the landlord there, calling into question their long-term ability to repay a whopping $249,410,000 in debt accrued over the past several decades.

Since 1993, the city has provided a guaranty for the debt service payments of the NBPA. That means if the authority is in danger of failing to meet its obligation, the city will have to raise property taxes or other revenue to meet the responsibility.

So far the authority has been able to pay down the debt on schedule, never missing a payment in its 66-year history. The NBPA spent nearly $4.4 million paying down debt last year, and another $12.4 million towards interest on that debt.

The NBPA borrowed approximately $174 million in 2010 to finance the construction of the Wellness Center and the nearby "Gateway Center," home to a Rutgers Barnes & Noble bookstore, several retail spaces, five floors of offices, and 200 housing units known as "the Vue."

That additional debt triggered the downgrade by Moody's, which lowered the city from the fifth-highest possible rating to the sixth-highest just months after the Wellness project was announced to the public.

"The downgrade to A2 reflects the city's limited financial flexibility, characterized by constrained revenue-raising capability… and large contingent liability created by the sizable amount of city-guaranteed parking authority debt," reads a report from the ratings agency in November 2010.

Moody's said there was not a strong enough track record to indicate the new facilities would pay for themselves, considering the reliance on commercial lease revenues.

"Without a historical trend of sufficient coverage from these commercial sources as well as traditional parking revenues related to the two new parking structures, we include parking authority debt related to these projects into debt burden calculations as a contingent liability."

The downgrade means the authority will have to pay higher interest rates on current and future debt.

In a section on "what could make the rating change," the rating agency listed, "Unanticipated difficulties in receiving lease payments, generating sufficient parking revenues or paying guaranteed debt service."

Standard and Poor's, the other major ratings agency, has ranked city and parking authority debt with an A+, maintaining their fifth-highest possible rating. 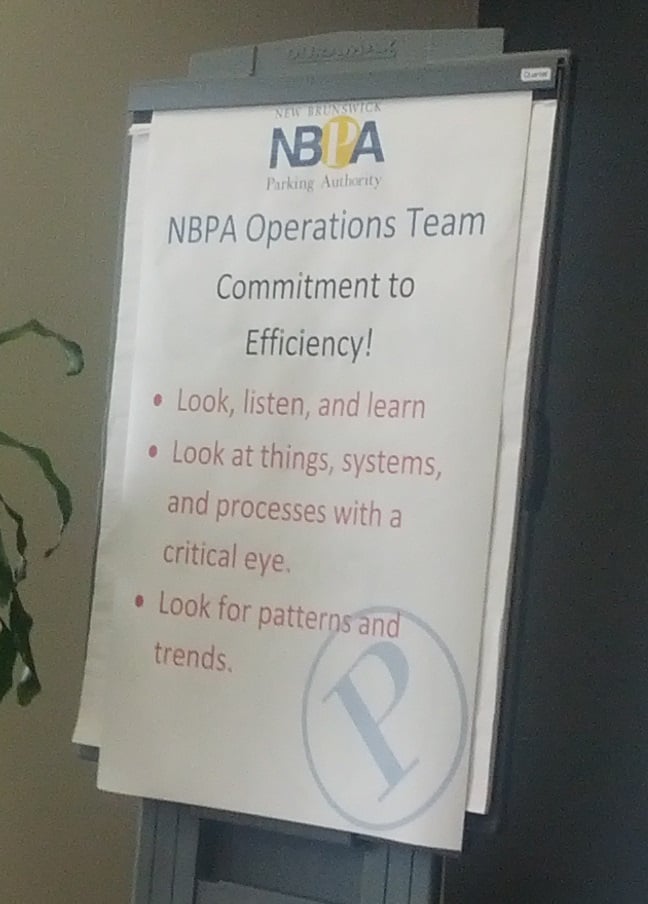 With nine structure parking facilities currently open to the public, 1,000 on-street parking meters, several surface lots, and an aggressive ticketing program, the NBPA is the state's largest Parking Authority by a wide margin.

But over the years it has also become one of the city's biggest commercial landlords, an era that began when Ferren Mall opened in 1983 with a variety of storefronts including a new Rutgers University bookstore and a large McDonald's restaurant.

That site, spanning two blocks of prime real estate, is also controlled by the parking authority, though it is largely vacant at this point.

The authority brings in the vast majority of its revenues from hourly or monthly parking fees in the city's abnormally large number of public parking garages.

But increasingly, revenue is expected from commercial rental properties like the supermarket space and other sources such as parking tickets and parking meters.

In recent years, rates have increased for both monthly and event parking in the city's decks, in addition to rate increases at city parking meters and increased fines for violating parking laws.

Since Mayor Cahill took office in 1991, the Parking Authority has grown enormously and enjoyed little oversight, taking on hundreds of millions in debt, building more than a half-dozen garages, including two with significant rental components.

"It's just a matter of procedure," Council President Rebecca Escobar told New Brunswick Today after being put on the spot at the most recent City Council meeting, asked if the $250 million in debt guarantees for one agency was a "healthy" or "normal" figure.

"In order to be able to move forward and to do great things you need to incur debt in order to make it happen," said Escobar, who is seeking re-election to the Council on Cahill's ticket.

Board members at the agency said they did not believe City Council members were formally notified of the rent issue.

NBPA attorney Leonard Bier said, "Obviously conversations took place between this board and the Mayor's Office," but emphasized there was no "affirmative obligation" to notify the five-member City Council. 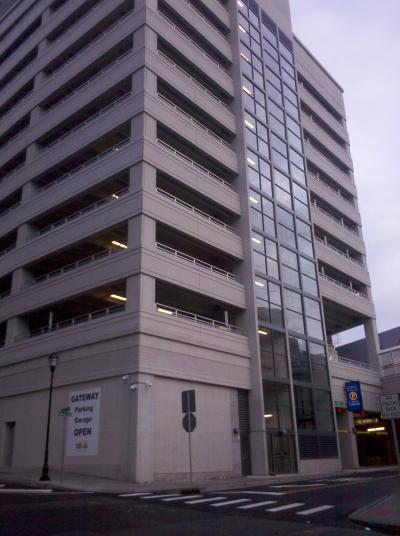 The parking authority does not pay property taxes, yet it owns some of the most valuable real estate in New Brunswick including three large sites near the city's train station.

However, in just the past ten years alone, the authority increased its annual "payment in lieu of taxes" (PILOT) from $1 million to more than $4.1 million, supplementing the city budget.

This year, the authority only has $2 million in its PILOT reserves, but officials say they still intend to make the full payment as promised.

"The goal is to make the $4 mil PILOT," said Mitch Karon, the authority's Executive Director, adding at yesterday's meeting that he was "fairly confident" the authority will be able to afford it.

Typically, the authority makes the PILOT in two separate payments, one in July and one at the end of the calendar year.

This year's NBPA budget anticipates far less revenue this year than in 2013, largely due to last year's one-time $7.9 million "air rights" payment from the developer who built the residential portion of the Gateway Center. 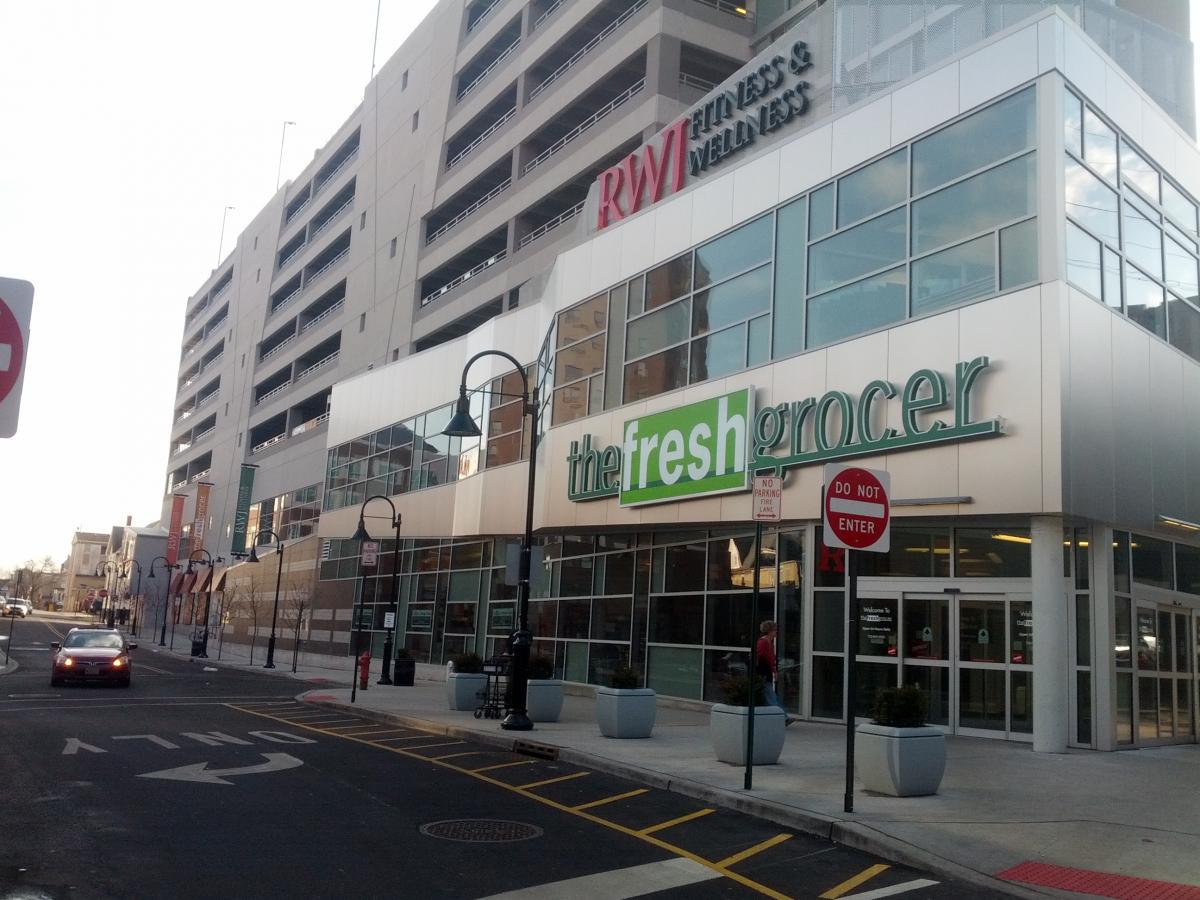 According to public officials, the supermarket, fitness center, and parking garage project added tens of millions of dollars to the already steep amount of total NBPA debt guaranteed by the city, which Moody's Investor Service characterized as a "large contingent liability."

The agency warned in 2010 that the "reliance on commercial lease revenues" like those expected from the supermarket had the potential to harm the authority's financial health.

"Although the New Brunswick Parking Authority has a long track record of healthy financial operations with no support from the city, we believe that the current project's reliance on commercial lease revenues could strain the authority's financial health should these revenue sources erode," reads a Moody's report issued on November 24, 2010.

According to Moody's, when the authority borrowed the $174 million in 2010, it was counting on paying off 22% of it with rental income from tenants in the Wellness and Gateway buildings.  But the ratings agency doubts the NBPA's optimism.

Now, with the supermarket space going unutilized and not generating revenue, the authority's budget has become imbalanced.

Those figures likely overestimate the revenue though, as both budgets include $621,088 in revenue for the vacant FreshGrocer space.

The failed supermarket owes the NBPA $1 million in back rent and other bills, but it is unlikely the shell company that operated the store for Metro Philly Management (New Brunswick Foods LLC) will ever pay.

Board members defended the decision to include the rent in this year's budget, even though they were aware of the delinquency.

"Fresh Grocer breached its legal contractual responsibility to pay rent," wrote Chris Paladino, President of the New Brunswick Development Corporation (DEVCO), which teamed with the Parking Authority for the project.

"Hopefully the NBPA will receive some compensation through the courts."

Across from the grocer site, the soon-to-be abandoned Ferren Mall and parking garage, awaits another potential team effort of DEVCO and NBPA.

Paladino told New Brunswick Today that the new development will not require the NBPA to take out more debt.

"The Development of the Ferren project will generate revenue for NBPA and not require the Authority to incur any additional debt," he said.

OTHER ISSUES THAT CAUSED THE 2010 RATING DOWNGRADE 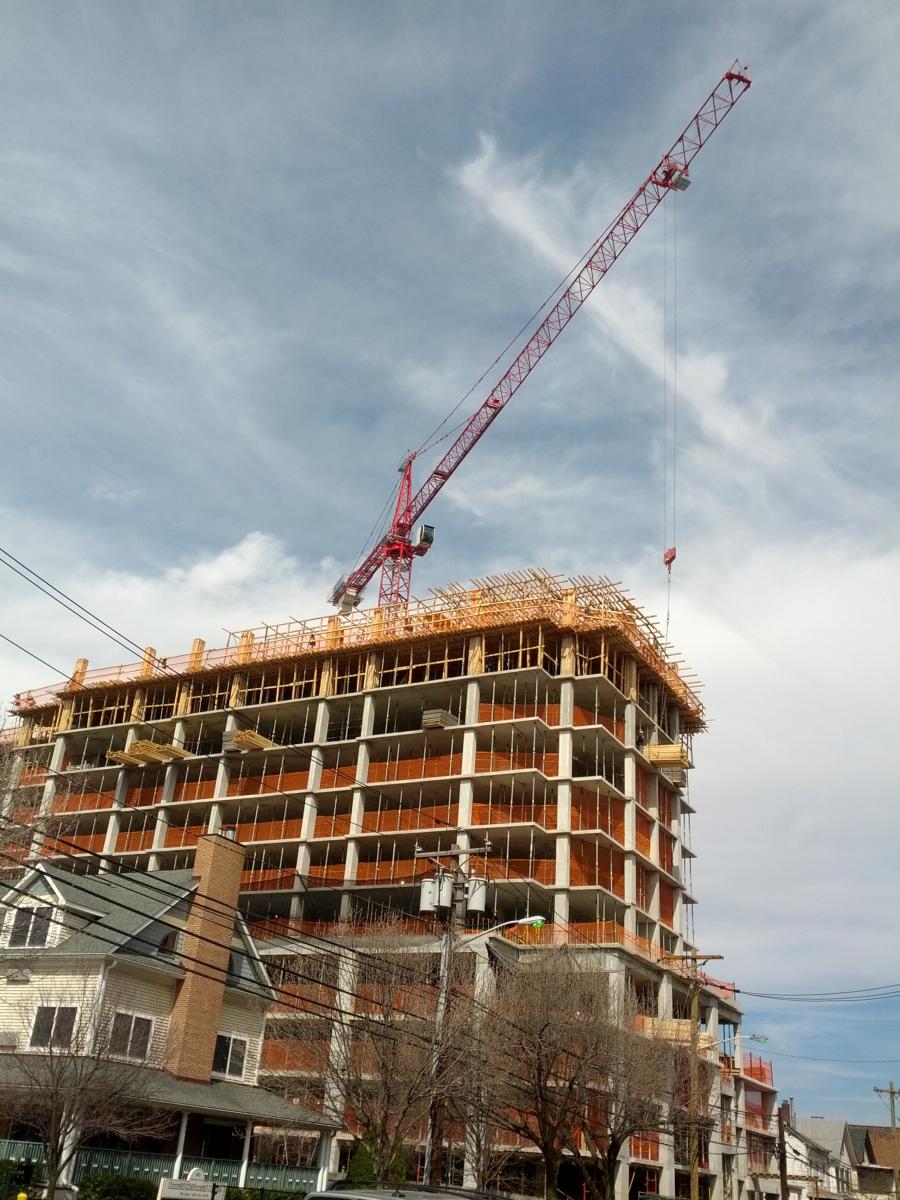 The Moody's document listed several additional reasons for the city's downgrade, including the fact that more than half of the city's property is tax exempt, including large swaths of NBPA land.

As we reported in 2013, the Cahill administration approved more than 25 different private properties for 30-year tax exemptions, including housing, a privately-owned dormitory, office buildings, retail, and even industrial warehouses.

"Since approximately one-half of the city's property is tax-exempt, the magnitude of property value is understated and reflected in the low assessed valuation growth of the city," reads the Moody's report from 2010.

According to the report, the city derives roughly one-third (36%) of its revenues from property taxes, 33% from various local sources including fees, and 10% from payments-in-lieu-of-taxes (PILOTs) paid by Rutgers, the NBPA, and private developers for tax-exempt projects.

"New Brunswick derives significant economic strength and stability from the institutional presence in its community. The city includes three campuses of Rutgers University… as well as not-for-profit health care and teaching institutions, most of which anticipate future growth or have ongoing expansion projects."

However, on the flip side, the large student population and low-income base of residents limits the city's ability to grow financially in some ways.

"Since one-quarter of the population is students, per capita income ($14,308), median family income ($38,222), and median housing values ($122,600) are only slightly more than one-half the state and two-thirds the national medians," reads the report.  "A segment of the city's population is also low-income, which is reflected in the city's high 27% poverty rate."

Other issues identified with the city's finances include a budget imbalance that first became apparent in 2006.

"Financial operations became imbalanced in fiscal 2006 when appropriations increased by $3.7 million, significantly more than the property tax levy increase of $937,000, and Current Fund balance declined to $1.8 million or 2.8% of revenues," reads the Moody's report.

Since 2007, operations have remained structurally imbalanced with two consecutive reserve draws and a third projected in fiscal 2010."

"New Brunswick's level of financial flexibility has significantly weakened since fiscal 2006. Current Fund balance levels declined to a narrow 1.6% of Current Fund revenues in fiscal 2009 from a more adequate average of 4.8% between 2001 and 2005."

"Given the state's imposition of a more restrictive levy increase limitation of 2% over the previous year beginning in fiscal 2011 and limited flexibility in raising other local revenues and increasing annual PILOT payments, we believe the city will be challenged to meet rising fixed expenditures absent significant expenditure reductions."

"Representing the first fiscal year of recessionary economic conditions, economically sensitive revenue in fiscal 2008 declined below budget and in conjunction with a significant increase in surplus appropriated as revenue ($2.7 million), fund balance returned to narrow levels ($1.6 million; 2.8% of revenues)."

"We also believe the city would be challenged to raise revenues to meet debt service requirements related to any of the $304.7 million in total city-guaranteed parking authority debt should the need arise from insufficient or delayed parking and/or commercial use revenues, given its relatively small municipal levy paid by low-income taxpayers."