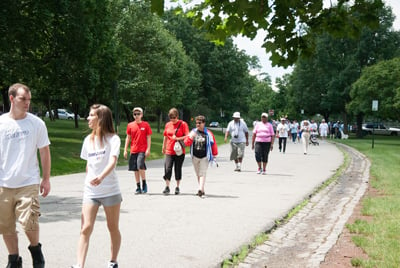 The organization sought to raise money towards their education and awareness programs while spreading their organization's message of togetherness.

“This day is dedicated to promoting community unity,” says the American Conference on Diversity President and CEO Elizabeth Williams-Riley.

“Valuing diversity and promoting respect are part of what our work is all about.”

The event brought in several hundred people and had many attractions including tribal dance, music, and giveaways prior to the ribbon cutting and start of the walk.

The day’s events also included an award ceremony for an art contest where many students submitted their depictions of struggle, equality, freedom and diversity.

Recent Lincoln High School graduate David Persaud of Jersey City was given recognition for his work and won first prize at the event for his artistic portrayal of these pertinent issues.

The organization expects to meet their $100,000 funding goal for the Lead for Diversity (LFD) program, which brings in delegates from schools around the state to teach them about social justice and diversity issues.

Students in this program will then bring the skills and social justice knowledge they have gathered back to their school districts, potentially reaching a population of over 20,000 students.

"We continue each and every year to work together to educate tomorrow’s leaders,” says Elizabeth Williams-Riley.

“The goal of the American Conference on Diversity is to ensure our neighbors of all races, ethnicities, faiths, abilities, sexual orientations, sexual identities/expressions, and ages know that they are valued and respected,” says President and CEO Elizabeth Williams-Riley.