NEW BRUNSWICK, NJ—A 22-story tower is set to rise over New Street, the latest in a neighborhood full of recent housing developments, such as Rockoff Hall, The Heldrich and The George.

At the May 13 Planning Board meeting, board members unanimously approved a project with more units than had been previously approved for the site in 2009.

Currently, the site is home to two abandoned buildings that likely were built in the 19th century, including the former New Brunswick Counseling Center at 84 New Street, and a vacant lot.

The 19,683 square foot site has an odd shape, rather like that of a thumbs-up.

It was pieced together from four or five smaller properties at some time in the past, and it has a depth of 83.4 feet, which required the developers to seek a variance. The city’s zoning ordinance had required 100 feet.

The building’s potential owner also agreed to enter into an agreement with the New Brunswick Parking Authority to offer spots to their tenants in the authority’s adjacent Morris Street Parking Garage, one of the few decks in New Brunswick that is under capacity.

If built, the new structure will rise to a height of 247 feet, 7 inches , making it the third tallest building in the city, after The Vue, and One Spring Street.

The structure would have 234 apartments to live in, 4,395 square feet of retail space on the ground floor, and 121 parking spaces.

There will also be space to hook at least 60 bicycles up to a rack, on the inside of the structure.

On the ground floor, there will be space for two retail outlets, a foyer for  residents and their guests, an office for the leasing agents, and a cargo area, as well as an entrance to three and a half floors of parking garage space.

Floors 5 to 22 will be home to residences for rent, with each floor having 13 apartments.

Most floors will have two studio apartments, seven one-bedroom apartments, and four two-bedrooms.  Each apartmentcomes with kitchen and bathroom.

Some fifth floor partments will have access to a patio, and the floor will also include a “clubroom” with access to a terrace.

The majority of apartments, 53%, will be one-bedroom flats with one bathroom.  Two-bedroom apartments will come with either two bathrooms or two-and-a-half.

The developers appear undecided about what to put in the basement, other than utilities. The basement is labeled “amenity/utility/storage space” on the floor plans, and is shown as one room.

Officially, the developer is 90 New Street, LLC, which is based in Island Park, NY. On the the site plan and variance application, the contact information listed included a Park East Construction Corporation email address.

That company has its offices in South Huntington, NY, and other locations on Long Island. 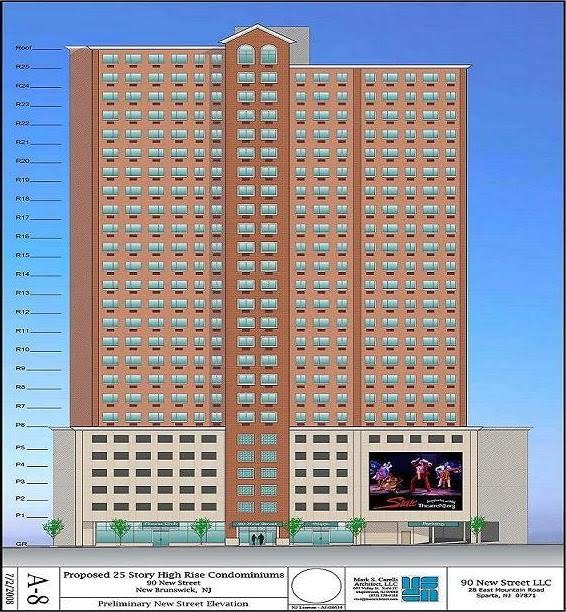 Developer James C. Wojcik, owner of the limited liability company set up to manage the property, is a relative newcomer to the New Brunswick scene development scene.

But a $1,250 donation to the campaign fund of Mayor Jim Cahill, who appoints the Planning Board members, may have helped pave the way for the settlement of a lawsuit standing in the way of the project, and the subsequent re-approval of the application with more housing units and less parking.

The developer also retained attorney Thomas Kelso, who also serves as Middlesex County’s top government attorney, to ask for a parking variance last month.  As we reported, Kelso represents one out of every three applicants before New Brunswick’s Planning and Zoning boards.

90 New Street, LLC hired Mark Carelli as architect for the upcoming skyscraper, with the engineering work being performed by Charles Olivo and Stonefield Engineering and Design.  Olivo also performed a traffic study on the intersections closest to the proposed building.

The number of parking spaces required by the city’s zoning ordinance was 242, twice the number in the approved plans.

The location borders the grounds of Our Lady of Mount Carmel church, and the Elks Lodge, which also houses the offices of the Middlesex County Planning Board.

An early event in that site’s history was when a tornado struck the area on June 19, 1835, causing massive destruction on New Street and in the vicinity.

By the late 19th century, people had already rebuilt on the ruined sites, and an 1880’s Sanborn map shows two-story and three-story houses at what was then “70 to 76 Carroll Place.”

Carroll Place had always been the name for the block of modern-day New Street, but only between George Street and Livingston Avenue.

It had become “84 to 92 Carroll Place” by 1912.  Eventually, Carroll Place became assimilated into New Street.

LAWYERS FACED OFF DURING AND AFTER INITIAL APPROVAL 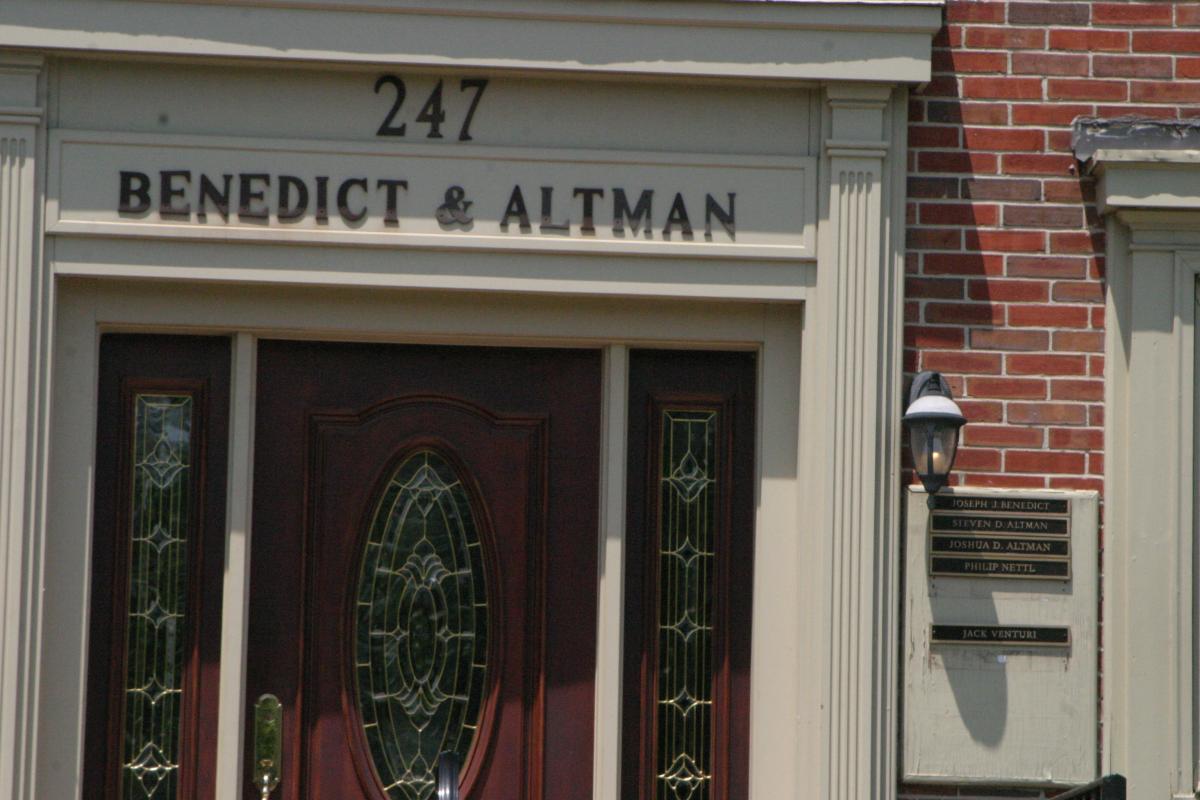 The building, back then, had been proposed to be 25 stories tall, slightly taller than today’s plans.

Joe Benedict, a lawyer at Benedict and Altman, as well as a resident of one of the 48 condominiums in The Heldrich, raised several objections at the time.

According to Benedict, the proposed building was ugly and it lacked setbacks, an issue that has since been addressed. Benedict claimed that the lack of a setback might make the project’s sought-after parking variance invalid.

Even back then, the project had fewer parking spaces than the zoning code required. Benedict asserted that the variance ought to be denied, as the requirements had been relaxed recently and the developer still didn’t meet the requirements.

The biggest problem, said Benedict, was the proposed tower’s height.  He wanted the structure to be no taller than 12 stories, the same as his building and the nearby downtown dormitory, Rockoff Hall.

Neil Savid, a worker at 83 Morris Street, located behind the proposed structure, complained that falling objects from the new building could pose problems for him, and that the developer had failed to ask to buy 83 Morris St. for the new project.

Savid had also wanted Morris Street to become a two-way street.  Interestingly enough, the parking authority had asked the county to approve a change that would make Morris Street a one-way street in the opposite direction it is today.

The intent was to help limit the size of queues that would build up in the underground parking garage in the Morris Street deck, which is connected to Rockoff Hall.

Kelso responded to Benedict by pointing out that New Brunswick’s redevelopment plan allowed skyscrapers in that part of town to soar to the proposed height, and noted that the 90 New Street parking area would have an entrance set up similar to the Heldrich residential garage entrance, located across the street.

Kelso answered Savid by saying that a construction staging plan would be presented to the city, but that it wasn’t an issue for site plan review. Kelso also admitted that his client needed to address drainage issues.

Mark Buchman, another resident of the Heldrich residences submitted a petition from his fellow condo owners who were against the new project.

Planning Board lawyer Ben Bucca had rejected that petition, saying petitions were inadmissable.

Tom Kelso responded that the construction would be held in check by rules and regulations, and, besides, no streets would be closed.

The planning board granted the parking variance by a vote of 8-0 at that 2009 meeting, but the building height and project size was reduced over the next few years.

George Gussis, a lawyer specializing in real estate, land use, family affairs, marriage, and small businesses, is the owner of 83 Morris Street, that little office building downhill from 90 New Street.

He recently purchased the building after selling his longtime office at 83 Paterson Street to make way for the Parking Authority’s Wellness Plaza project, including the failed FreshGrocer supermarket.

Gussis was the sole objector to the 90 New Street project this time around, arguing the lower amount of parking spaces was done for the sole purpose of maximizing revenue for the developer by including more units overall.

The spector of traffic was raised again, as it had been in 2009. According to George Gussis, the new project’s 121 spaces might produce traffic from 121 cars. To illustrate this point, he noted the influence of a neighboring church.

Our Lady of Mount Carmel Church is a Hispanic and Catholic church, at 75 Morris Street, and will be one of only three low-rise buildings that will remain on the block if the project moves forward.

Gussis’ asked Olivo, the developer’s traffic expert if he had done studies of the intersection of Morris and George Streets, or if the studies were done on Sunday to account for the church traffic.

Like other Catholic churches, Sunday masses attract a large crowd, and worshipers pile into their cars afterwards backing up traffic at the light and all the way down the block.

Gussis also argued that the principal change between the 2009 proposal and this year’s plan was the addition of apartments to the proposed structure, resulting in more revenue for the developer.

The number of apartments in the 2009 proposal was 169, but this year’s proposal calls for 234 total apartments, including 36 studio units.

Gussis also commented that the apartments had originally been planned to be condominium units, owned by the inhabitants.  This time around, the housing units are now intended to all be rentals, further exacerbating the city’s well-documented lack of home ownership.