NEW BRUNSWICK, NJ—You might wonder what a “castle” is doing amidst the dorms of Rutgers University, so close to the Brower Commons and Demarest Hall.

Bishop House was built in 1852, but it didn’t become property of Rutgers University until 1925.

On July 12, 1976, the building was added to the National Register of Historic Places. Today it is one of 20 such places still preserved in the city.

And last month, longtime community resident Morris Kafka gave a presentation on the Bishop House at a meeting of the New Brunswick Historical Society, held inside that building’s Ship Room, on the second floor.

The room has a blackboard on one side, suggesting it was used as a classroom at some point in time, and it is the best-known room in the mansion.

This “castle” is actually a Victorian mansion, dating to 1852, and, when it was built, it was one of New Brunswick’s finest houses.  It belonged to James Bishop, Jr., a wealthy businessman who specialized in the transatlantic trade.

Also known as the “Pomparo Room,” legend has it the room was designed as a replica of the cabin of the “Pomparo,” the younger Bishop’s favorite clipper ship.

The room’s ceiling has heavy wooden beams, decorated with designs, and a fireplace in the house’s only wooden mantelpiece. The floor is said to have a picture of the “Pomparo”, its sails unfurled, inlaid in parquet.

However, it was covered in green linoleum by the 1980s, and the saggy floor dons a gray carpet today.

The younger Bishop bought the 10-acre site in 1848 from the estate of the late James Harper, which had been run by Harper’s  wife and son for fifty years following his death.

Harper’s family had acquired plots of land from adjacent property owners, so the parcel that was sold to Bishop was much bigger than what Harper had actually owned.

It is not clear whose idea it was to build the Bishop House, but their relationship may well have fueled the desire to build the finest house in all New Brunswick, outshining even the Bucceleuch Mansion.

162 years ago, Bishop House opened with all the latest conveniences of the time including gas lighting, a technology that was newly introduced to New Brunswick by Bishop’s brother David, a local politician.

In addition, the house had central heating, hot and cold running water, and interior toilets, also novelties in the 1850’s.

Bishop lived in his mansion for twenty years. He became sick in 1871, and traveled to Europe in an attempt to get better.

When Bishop returned, the Panic of 1873 had sapped his wealth.  He fired his eighteen servants, and moved to a farm near Morristown, selling the mansion to Mahlon Martin and his three sisters in 1874.

Bishop later became the head of the New Jersey’s Bureau of Labor Statistics in 1878, and relocated to Trenton.

In his will, Martin granted his sisters the right to keep Bishop House for the rest of their lives.  But after they died, according to the will, Martin wanted the house to go to St. Peter’s Catholic Church.

Unfortunately for Martin’s wishes, the last of his surviving sisters, Eliza Abbie, a widow, was not a Catholic.

Abbie felt no need to give the house to a church she didn’t belong to.  So she went to court and had the church’s deed repealed. 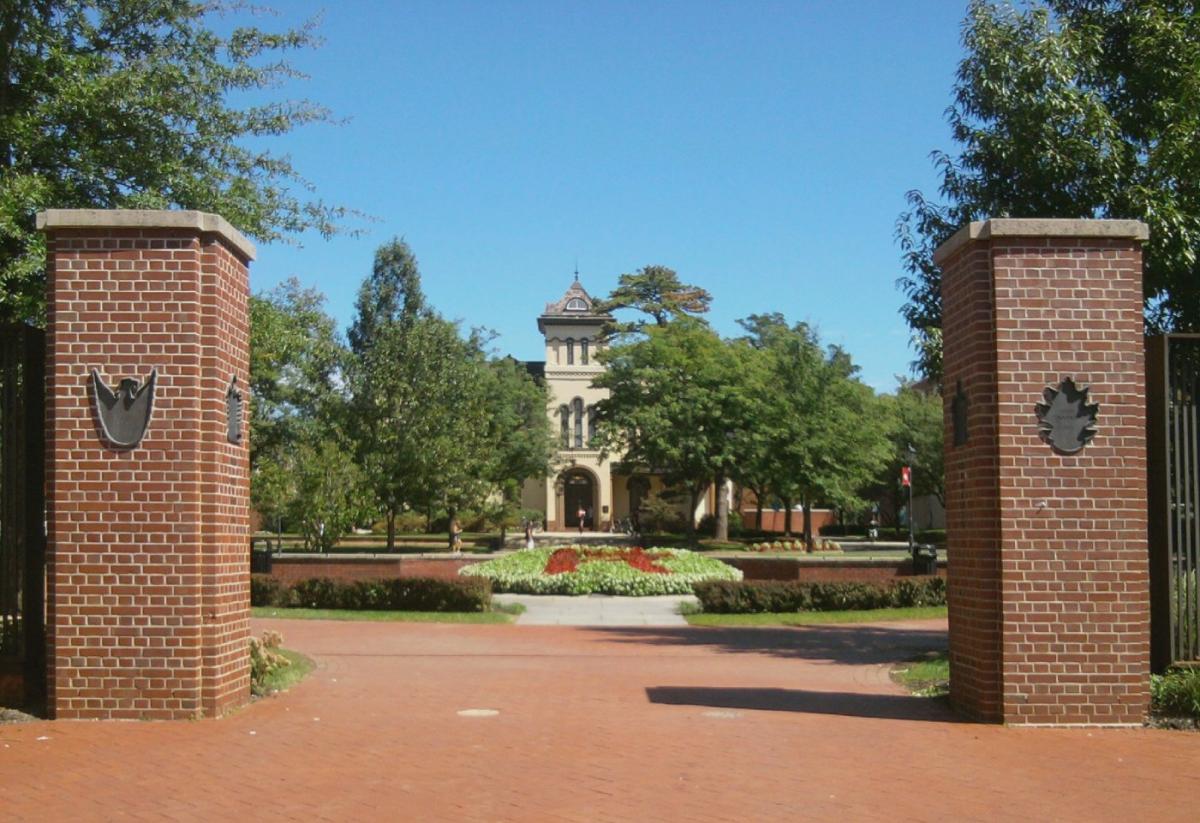 Rutgers used the house as a residence for the Dean, and then an abode for the Chaplain.  It also served as a reception place for the University President, and the home for a handful of academic departments.

In the 1960’s, Rutgers built dorms surrounding the unique structure.

Bishop House later became the site of the Dean of Students’ office, although several of the larger rooms still serve as classrooms today.

The drawing room of Bishop House showed up in the middle of the 1982 movie, “The World According to Garp”, as a classroom, which it was at the time.

The architecture of the Bishop House was in vogue in 1852: it was an Anglo-American interpretation of Italian Renaissance country villas, a style known as “Italianate.”

The name of the architect is unknown, but, whomever he was, he appreciated the Victorian taste for variety and an antique appearance.

Like other Italianate houses, Bishop House has porches and verandas, rounded top windows in groups of two or three, bay windows, and stained glass windows.

Its walls are made out of brick, but clad in stucco. Windows come in a variety of shapes, and there is a tower with a pointed roof.

A cast iron porch, which might remind you of New Orleans, graces the west side of Bishop House. Such ironwork might have been made in New Orleans and made its way to the East Coast. 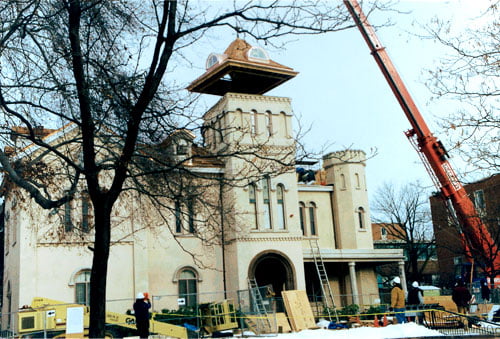 The exterior has lost some ornamentation over the years – the fancy chimneys that once decorated the roof and the carved capitals that used to be at the top of the front porch columns.

But Bishop House still looks a bit like a fairy-tale castle of sorts.

In late 2002, the buidling’s roof was refurbished by Somerville-based Pieros Construction after it showed signs of aging, according to a report on ProfessionalRoofing.net.

The inside is also well-decorated, with the original mosaic floor decorating the foyer.

Floors in the other rooms were made of patterned wood, and intricately decorated marble fireplaces grace the first-floor rooms.

The house’s western side contains the largest room, a massive drawing room or parlor bisected by an arch.

Its fireplaces had a grape motif, and they were crowned by seashells. Behind the parlor was a “cabinet”, really a small room, which had walls decorated with murals.

Across the hall from the parlor sat a library, decorated with tall bookcases in Gothic style.

In recent years, the drawing room was a music classroom, and then became a reception room. The library across the hall became the Dean of Students’ office.