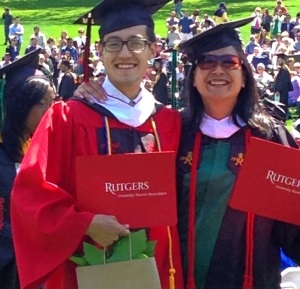 The event was a "Bring Your Own Lawn Chair" event for the families and friends of the graduates.

Rush Holt was the keynote speaker that day, addressing the students with his take on the Dr. Seuss title, "Oh, the Places You'll Go!"

Holt changed the phrase to "Oh, the Places We'll Go!" telling the graduating class that they will continue to work together in their fields as they originally "came together deliberately at Rutgers" to learn more about the world they live in through science.

When the ceremony ended, the SEBS graduates turned their tassels to the left. Some threw their caps in the air as Pharell's latest hit "Happy" blasted through the event's sound system for all to hear.

One of the 2014 graduates Christine O'Connell, a mother of five who recently lost her full-time position at Rutgers, according to NorthJersey.com's Hannan Adely.

O'Connell graduated with pride alongside her 21-year old son on Monday.

"Union members believe she was a target of retaliation because of her work as a union organizer on campus," wrote Adley.

"They held protest signs at the graduation and have an online petition calling for her reinstatement."

And the protests appear to have worked.  The 300+ individuals who signed the petition to SEBS Dean Larry Katz received an email on May 23 indicated O'Connell has been hired to a similar position based in Essex County.

"She'll take on new duties and even get a raise," read the announcement.