NEW BRUNSWICK, NJ—Ahmed Ewida, manager of the Just Delicious truck, shakes his head. He’s trying to keep a business afloat despite having new gas and electricity expenses and a customer base that’s been sliced nearly in half.

Samir Alkilani, owner of Mr. C’s grease truck, can do nothing but watch as group after group of students bypass his truck in favor of using their meal swipes at nearby Neilson dining hall, where they can eat as much as they want and then take more food to go.

This is the new reality for the grease trucks.

After enjoying years of successful business in Lot 8 on College Avenue, the truck owners are finding it harder than ever to keep afloat. 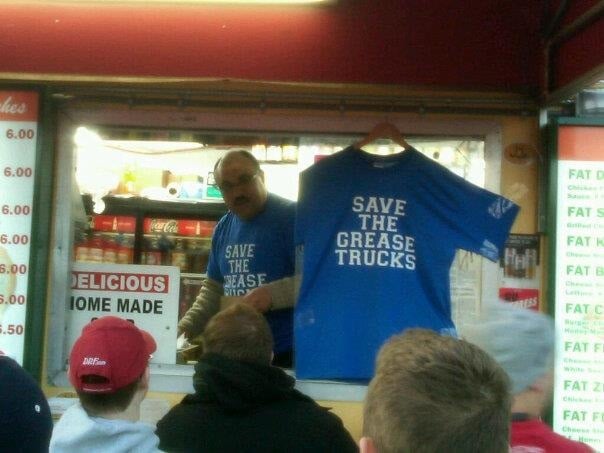 Once a campus institution that even enjoyed some national acclaim, the cluster of trucks was split up in August, and owners were given just one month's notice they would have to leave their home of more than two decades

Now, the trucks are split up across the sprawling campus and suffering from decreased business, with Just Delicious and Jimmy's Lunch Truck  a block away from each other on the College Avenue campus.

Two other trucks post up on the other side of town, and a brand-new truck recently took to the streets of the Rutgers Busch campus in neigborhing Piscataway.

Since being evicted from their longtime home in August in favor of a 14-story privatized dormitory, every truck owner says they’ve seen a drop in business.

“The last few months we’ve gone in the minus,” Alkilani says. “I haven’t made any income from the first day of December to now.”

Part of the problem is dealing with the challenge of adapting to a new location and making the change known customers, a foreseeable problem any time a business moves.

Ewida, whose Just Delicious truck parks on George street between Hardenbergh and Campbell Halls, says he still gets customers who tell him they were driving by and surprised to see his truck. RU Hungry? now parks on Nichol Ave, and has started a delivery service in an effort to reach more than just foot traffic.

But the unique circumstances surrounding the grease trucks have led to more trouble than turnout since the move.

Because the grease trucks’ central location was known as an open-air late night spot for partygoers, it encouraged customers to congregate in lot 8, attracting visitors on its own.

The trucks got much of their business from out-of-towners who would come to enjoy the atmosphere. 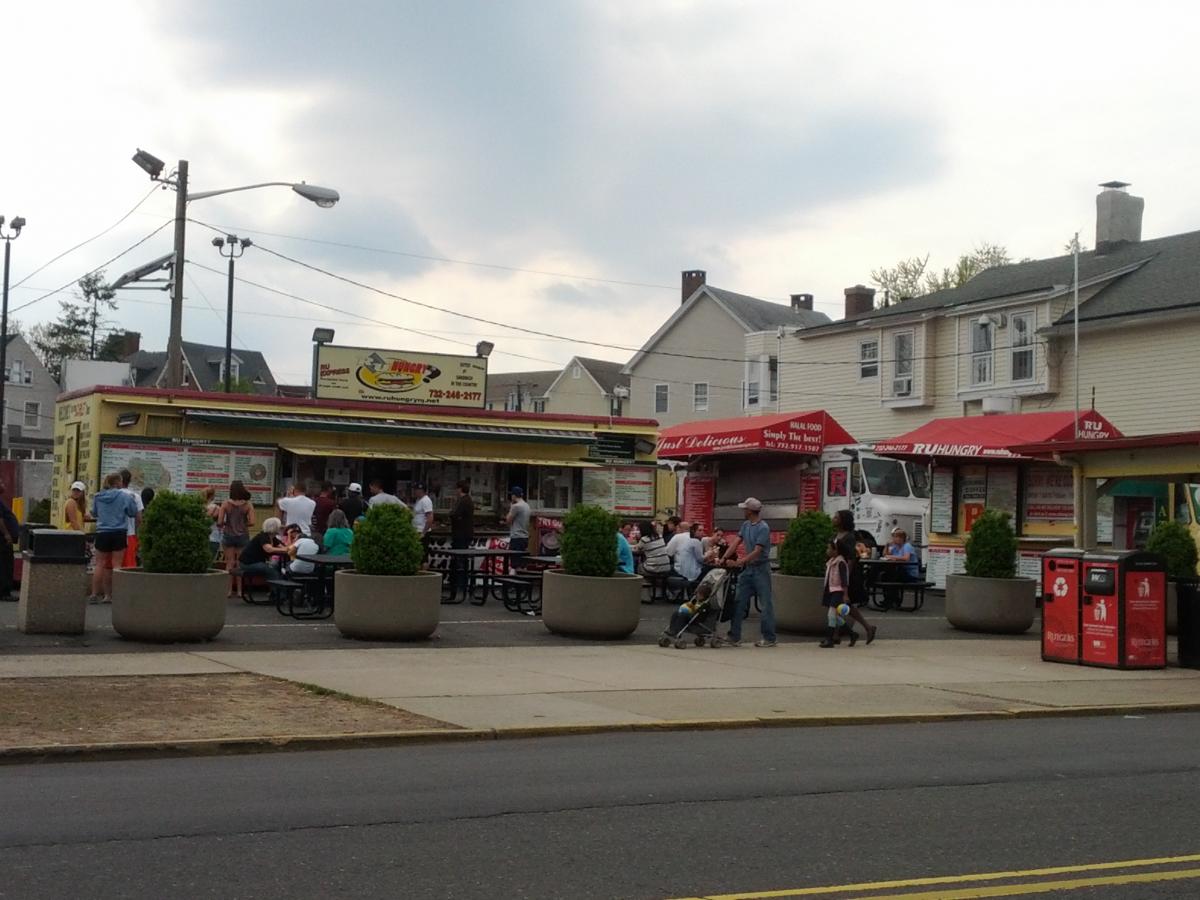 Now, on their own and dispersed throughout campus, the trucks have lost the familiarity and atmosphere that made them a draw to more than just college students.

“People used to come from out of town because we’d been around for 25 years and the word was out ‘these are the grease trucks, this is the location’ because we never moved,” said Ewida.

“Here we have to move the truck every night, so if you don’t live in town and you come here after 2 am you’re going to find an empty spot.”

The old Grease Trucks parking lot was located in close proximity to the city's train station and most popular campus bus stop, as well as the main academic and fraternity areas of the campus.  It was once the site of the Robert Wood Johnson mansion, Gray Terrace, which survived as a sorority house until the 1960's.

After providing parking spaces to students, visitors, and faculty over several decades, the lot also became a home for nine food trucks in the early 1990's after the city passed a law kicking the trucks off of the street. 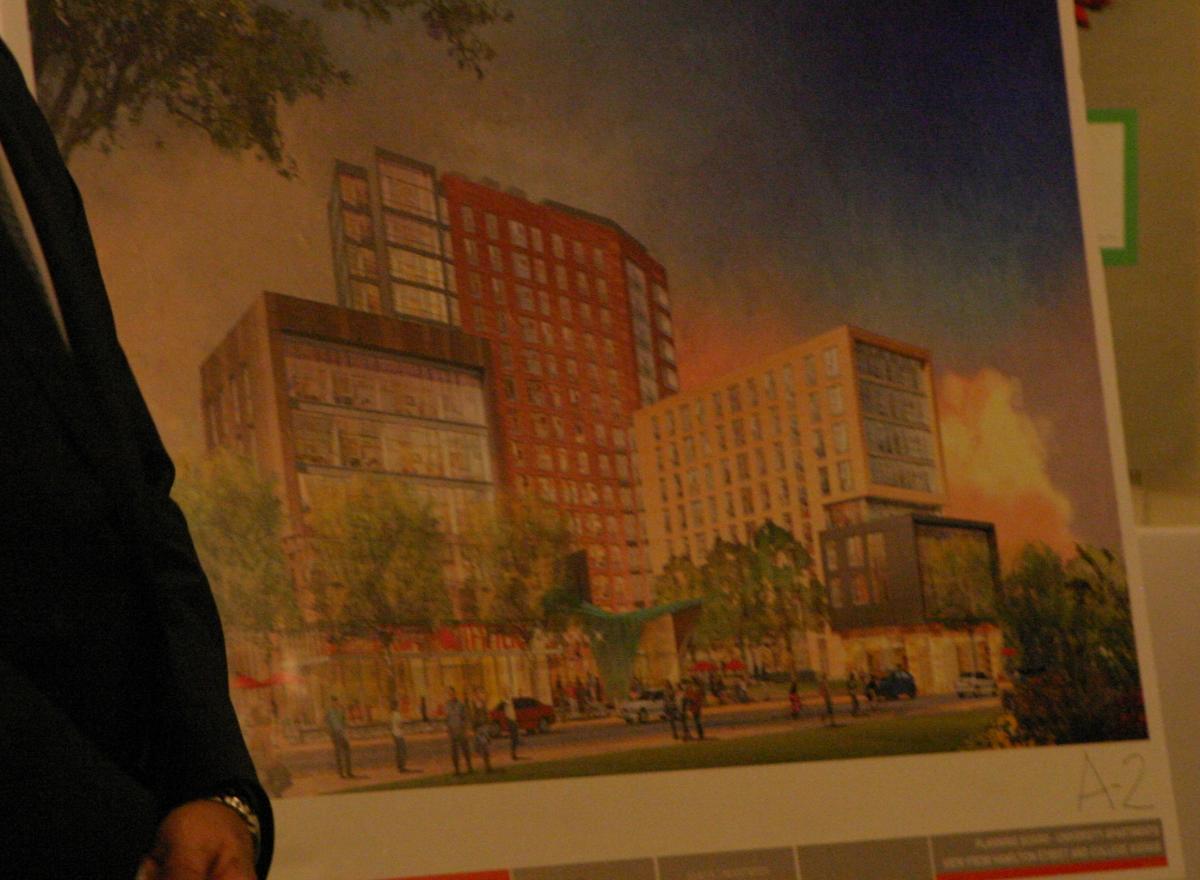 In September, more than a year after the legendary trucks' abrupt eviction, a partnership between Rutgers and New Brunswick Development Corporation (DEVCO) will begin construction on a 14-story student apartment building with 15,372 square feet of retail and 138 apartments.

The building will house up to 441 residents in the U-shaped structure, with an open courtyard containing a couple of pavilions that will have a "boardwalk" feel to them.

Alkilani now parks Mr. C’s on Dudley Road near the Cook Campus Center. For him, the problem has less to do with marketing and more to do with what several owners say are attempts by the university to put them out of business.

As part of the new arrangement with the school the trucks have been saddled with expenses and obstacles they hadn’t had to deal with as businesses that never left Lot 8. 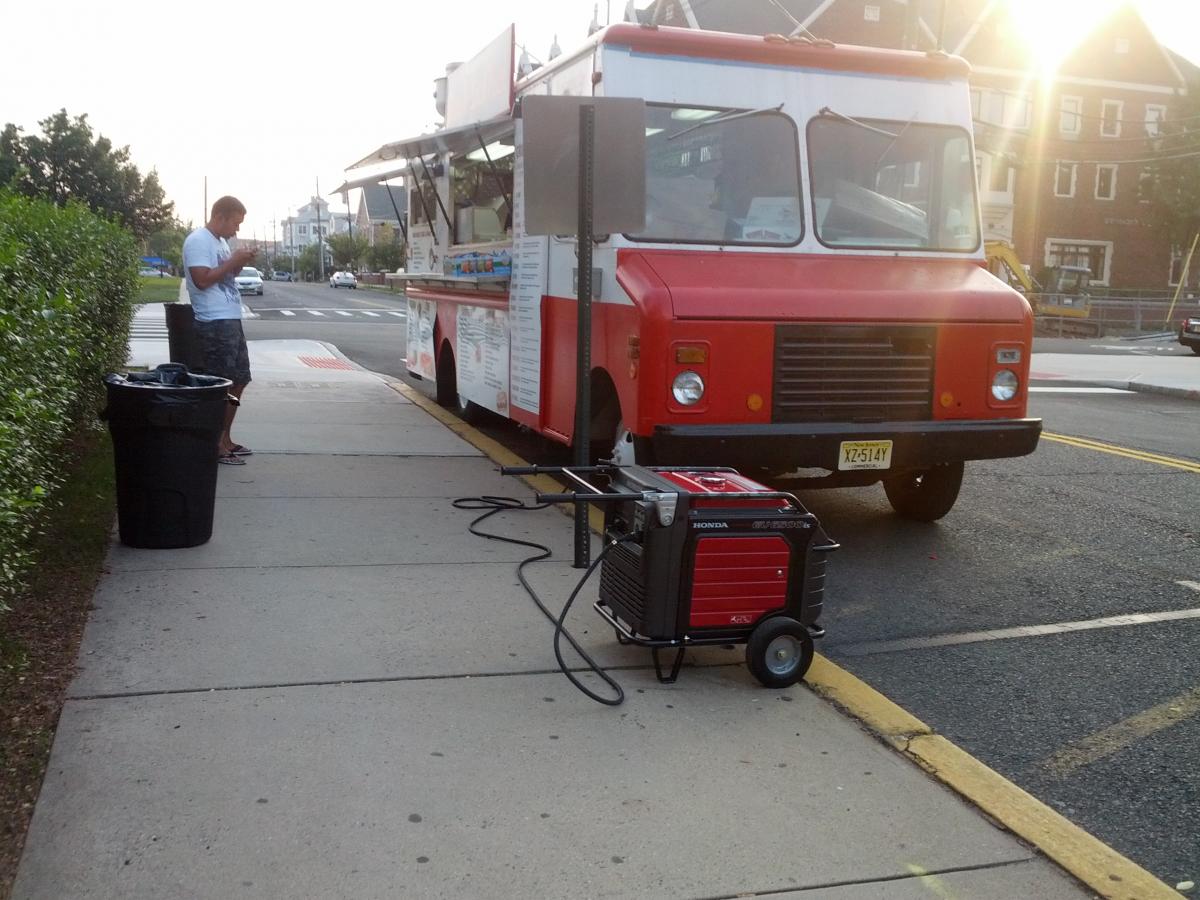 They now have to supply their own power, previously given to them at a cost by the university, and the insurance, registration and gas that come along with operating a mobile food truck.

“We have to have insurance for the truck because it’s mobile,” said Ewida.

Alkilani says he’s sunk almost $140,000 into his truck, including the cost of a new generator and fire system, plus an extra $500 every week for gas and propane. He hasn’t come close to breaking even since the move.

“Sometimes on weekends you have good days and it makes you feel happy,” said Alkilani. “But most days it sucks.”

Truck owners also must find their own parking after business hours or risk a violation from campus police. The first serves as a warning and the second can warrant a suspended license. But for old, cumbersome trucks like these, simply moving the truck can sometimes lead to problems.

Ewida tells of an late night in winter when his Just Delicious truck had a mechanical problem and couldn’t move. But he got no help from the university, and was forced to get it towed.

“It’s 2 am. Rutgers police said ‘If you don’t move the truck, you’ll get a violation.’ If I get a tow truck that’s 3 days work, and if I get a violation maybe I’ll lose my license. It’s a lose-lose.” 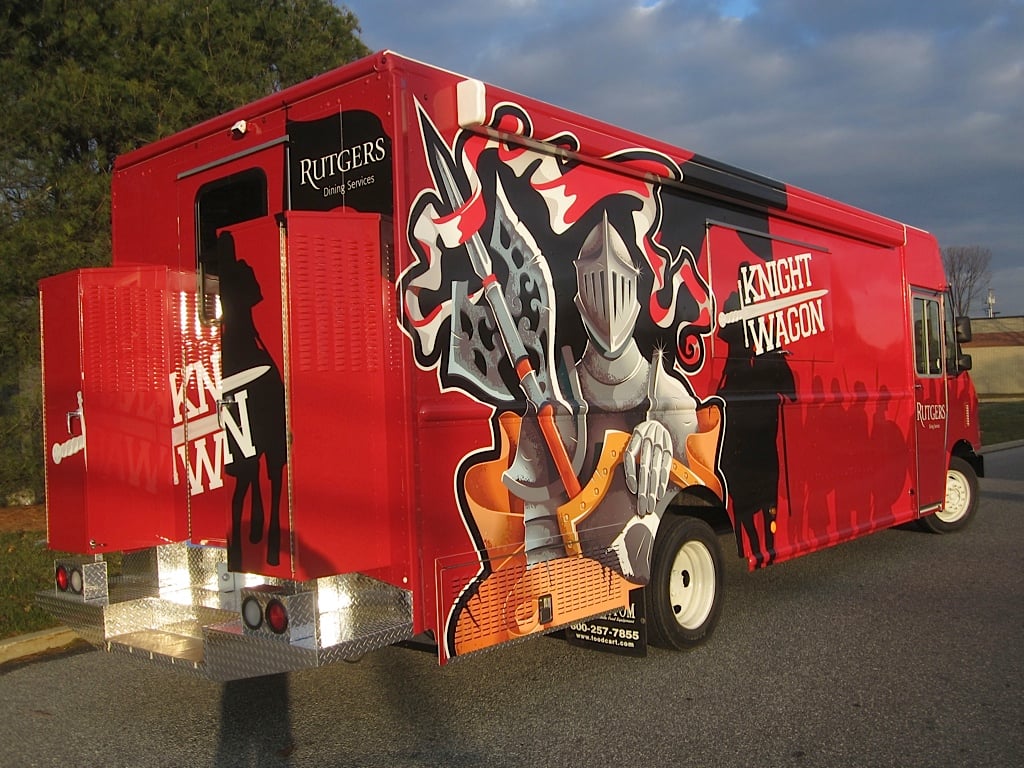 By far the biggest concern truck owners have is their ability to compete with school-sponsored eateries, and the administration’s steadfast denial to let students use meal plan swipes at the trucks.

“It’s very hard to survive here, and without the meal swipe there’s no way,” said Alkilani.

“Watch the students. There’s good traffic but these kids, they only have meal swipes. They don’t want to spend any cash. It’s a nightmare. As much as we were happy in that lot serving people, that’s how much we’re pissed off.”

Alkilani has pleaded with the school to give them access to meal swipes, even going so far as emailing Rutgers President Robert Barchi. But he says he’s made no headway.

And then there’s the increasing competition in what for years was a stable food truck market.

Both the Oink and Moo BBQ truck and the Knight Wagon have opened for business while the saga played out, with the later being a school-sponsored truck that can take its pick of prime parking spots and also accepts student meal plans, something the other trucks are not permitted to do.

Jimmy Kassouf parks his lunch truck at the intersection of College Avenue and Senior Street. But despite a reputation for serving more than just fat sandwhiches—he does more of his business on gyros than anything else—customers largely ignore his truck flock to the Knight Wagon parked across the street.

Kassouf says he does much less business on days the Knight Wagon is parked near him, and Alkilani closes up shop rather than compete with the new truck that takes students’ meal plans.

Rutgers is unapologetic about the treatment of its longtime food vendors, saying it wants to see more diversity in the types of food offerred and is keeping its options open.

"In order to continue to offer a variety of food choices, the university remains open to proposals from mobile food vendors who may wish to do business on campus," university spokesman EJ Miranda told New Brunswick Today.

But despite the uncertainty of the future, the truck owners insist they don’t want to move and will renew their permits when they expire in June. Ayman Elnagger, owner of RU Hungry?, says the move really hurt business, but they are just now starting to see an uptick in sales.

“It was really hard, but now it’s getting better,” he said. “We’re not the same as we used to be, but we’re getting there. I hope we stay here. It takes a lot of effort and a lot of money to move because people don’t know where we are.”

Ewida agrees, and think all the trucks need is for the school to cut the owners a break on the most contentious issues.

Mr. C’s truck has been in Alkilani’s family for over 30 years, and he doesn’t want to give up yet.

“For some reason I still believe there’s hope,” he said. “Maybe they will give us the meal swipe. Nothing’s impossible, if they want to support us. But they want to kill us. “

Kassouf remains upbeat, saying he too will keep his truck open for now despite losing much of his potential business to the Knight Wagon.

As he says that, a student waves to Kassouf and he waves back, asking how she’s doing. She responds that she’s good before walking across the street and joining the 20 or so other students in line at the Knight Wagon.