NEW BRUNSWICK, NJ—When a local Bennigan's restaurant and bar went out of business, local bar owner Larry Blatterfein pursued plans to open up a sports bar in its place.

At the time, Blatterfein owned Knight Club, one of the more popular bars on the Easton Avenue corridor.

He said his second proposed establishment, a bar geared toward fans of the New York Yankees, would create 75 jobs and improve the city's tax base.

But the plans for his "Buck Foston's Roadhouse" at the intersection of Routes 1 and 18, ran into trouble from the city's Mayor Jim Cahill, a resident of the adjacent neighborhood.

That complaint has now resulted in a $1.535 million judgment against the city, the latest in a long line of big losses in the courtroom for Cahill's administration.

"While it would have been better to win, the verdict was not for the amount Mr. Blatterfein was seeking," Cahill told the Star-Ledger's Sue Epstein.

Blatterfein was seeking $7 to $10 million according to the report.

According to the federal complaint filed three years ago, "Mayor Cahill persuaded, cajoled, and/or coerced the Police Department and members of the City Council to act (or fail to act) in a manner that has… ultimately denied [Blatterfein] the opportunity to procure the liquor license required."

In federal court, Blatterfein was represented by Brett Joshpe and Edward Paltzik of the Manhattan-based Joshpe Law Group LLP firm.

The city was represented by outside counsel Lori Dvorak, a private attorney who is married to the son of former Mayor John Lynch Jr.

During the six-day trial in Trenton's federal courthouse, Cahill and two Councilmen who opposed the bar were called to the witness stand, as well as City Attorney William Hamilton, Planning Director Glenn Patterson, and four other city workers.

The jury spent two days deliberating before returning a 6-1 vote in Blatterfein's favor, and deciding to give him $1.535 million in funds from the city's taxpayers.

Among the allegations in the case were that the New Brunswick Police Department took three months to conduct a required background check on Blatterfein and his business partner, a check that generally takes no more than two weeks.

Although he already operated Knight Club since 1982, police told him it would take eight to ten weeks to complete the checks to make sure he and his business partner were fit to own the licene.   Blatterfein's business partner was Lawrence Sorentino, a former MTA police officer with a "clean record," according to the lawsuit.

And after twelve weeks had passed with no response, Blatterfein filed the lawsuit.

Once the background check finally came through, Police Director Anthony Caputo and Detective Michael DeBonis recommended that the license be transferred to Blatterfein, but that he be denied his application to move the license from its George Street location to Bennigan's.

On that advice, the City Council stopped the transfer of the liquor license from the former Sapporo restaurant on George Street in a 2-1 vote, effectively preventing Blatterfein from moving forward with the proposal. 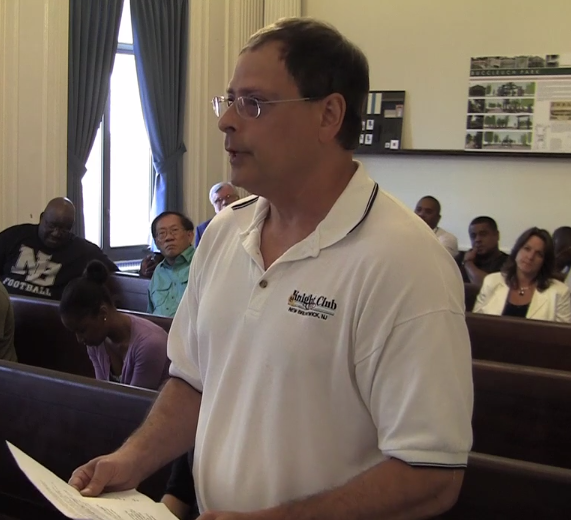 After being denied the transfer, Blatterfein sold the Knight Club, which he had owned for more than 30 years, and moved to Florida.  There, he recently opened up another bar whose name is a play on words: Sunova Beach.

Exactly why Cahill opposed the planned Buck Foston's Roadhouse so forcefully depends who you ask, but in many ways the case hinged on the motivations.

The name Buck Foston could be considered a spoonerism, where switching the first letter of each word makes for a totally different – and allegedly vulgar – meaning.

On or about April 20, 2011, Blatterfein says he met with Cahill and the Mayor tried to convince him to change the name.

"At that meeting, Mayor Cahill complemented Blatterfein's skills as a businessman and expressed his approval for building a restaurant and sports bar," reads the complaint. "The only objection Mayor Cahill expressed… was the name."

Confronted by Blatterfein with the presence of "Cluck-U Chicken" on Easton Avenue, the Mayor's defense was allegedly that "chickens cluck."

Blatterfein alleged that Cahill, who lives roughly a half-mile from the proposed site, didn't want an anti-Boston bar in his neighborhood because he was a Red Sox fan. 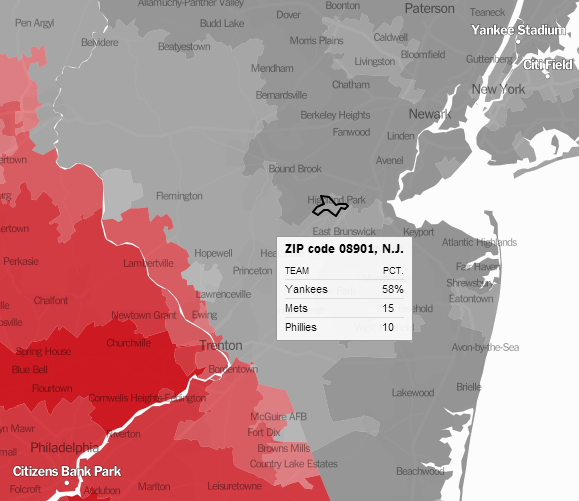 In this respect, the mayor is most certainly in the minority, according to a New York Times analysis that showed the 08901 zip code is dominated by Yankees fans.

Here in the Hub City, 58% of people support the Yankees, while the nearby New York Mets and Philadelphia Phillies come in at just 15%, and 10% respectively.

Cahill's son Casey played minor league baseball for eleven years, but it was another AL East team, the Baltimore Orioles, that drafted him out of high school.

According to the complaint, Cahill offerred up the information that he was in fact a Red Sox fan, but said it "did not play a role in his opposition to the name."

Instead, Cahill maintained in the April 2011 meeting with Blatterfein that the name was "vulgar" and inappropriate.

When the lawsuit was filed in June 0f that year, it probably didn't help Cahill's cause that his spokesman used a vulgarity of his own, flippantly responding to a New York Post reporter asking for comment from the city.

Spokesman Bill Bray was quoted in the infamous Page Six column: "Feel free to contact us on some good news that will actually have an impact in the real world  when you’re done write crap no body will remember."

That same month, Cahill's Planning Director Glenn Patterson authored a lengthy memo that seemed to be exploring possible ways to stop the bar based on its name.

"'Indecent,' 'obscene,' and 'lewd' are subjective terms," wrote Patterson.  "'Buck Foston' probably does not meet the definition of either.  It's probably 'vulgar,' but not 'indecent.'"

After the verdict, Cahill asserted that it was the bar's location – at one of the city's busiest road junctions – was the reason for the license denial, not the bar's name.

"Motorists and the surrounding neighborhood, who travel the roadway, will not be burdened with a nightclub and sports-bar drinking establishment that doubles the occupancy of the former restaurant on the site located on a dangerous off-ramp connecting two major highways in New Brunswick," Cahill said. 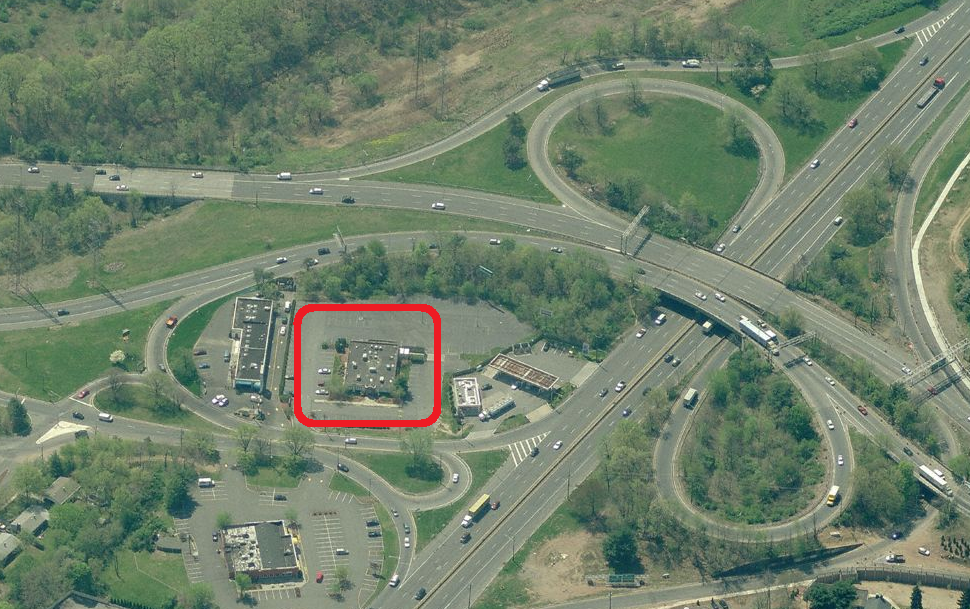 Still, the NJ Department of Transportation (NJDOT) didn't think the restaurant and bar would significantly increase traffic at the intersection, and did not require new access permits, according to documents.

The junction was once a simple traffic circle, and a restaurant, gas station, and other commercial uses at this junction were originally on the east side of the circle.

In the 1950's, Route 1 was widened and shoved right through the middle of the old circle, and by 1963, the present unwieldly intersection was already in place, with a "new circle" to the east of the old one.

The car wash, as well as one of the two restaurants in the area were built during this period.

Mayor Cahill claims that the area would not be allowed to be developed in the present day, but that the car wash, restaurant, and gas station were grandfathered into current zoning regulations.

Some criticized Cahill for not taking the abandoned property out of consideration sooner, using the city's power of eminent domain, if it was such a dangerous location for a restaurant and bar.

Well-known political polling expert Patrick Murray travels through the intersection every day.  He noted that, although the NJDOT poured millions into Route 18's expansion into Piscataway, "what has always been the biggest and most dangerous traffic problem – the Route 1 interchange – remains untouched."

"This property should have been taken, by eminent domain if necessary, years ago," Murray told New Brunswick Today.

Instead of paying a landowner for their non-conforming land use, governments often find it easier just to let dissident structures and land uses remain.

If a nonconforming structure is demolished or wiped out, the land use has to change to what the land is zoned for, unless the owner can get a variance.

Hence, an abandoned Bennigan's restaurant still sits, derelict but not demolished, at the circle.

The abandoned restaurant is owned by Thasos Island Realty, based out of a PO Box in Edison.  Its assessed value is $650,000, including $370,000 for the land and $280,000 for the building, according to property records. 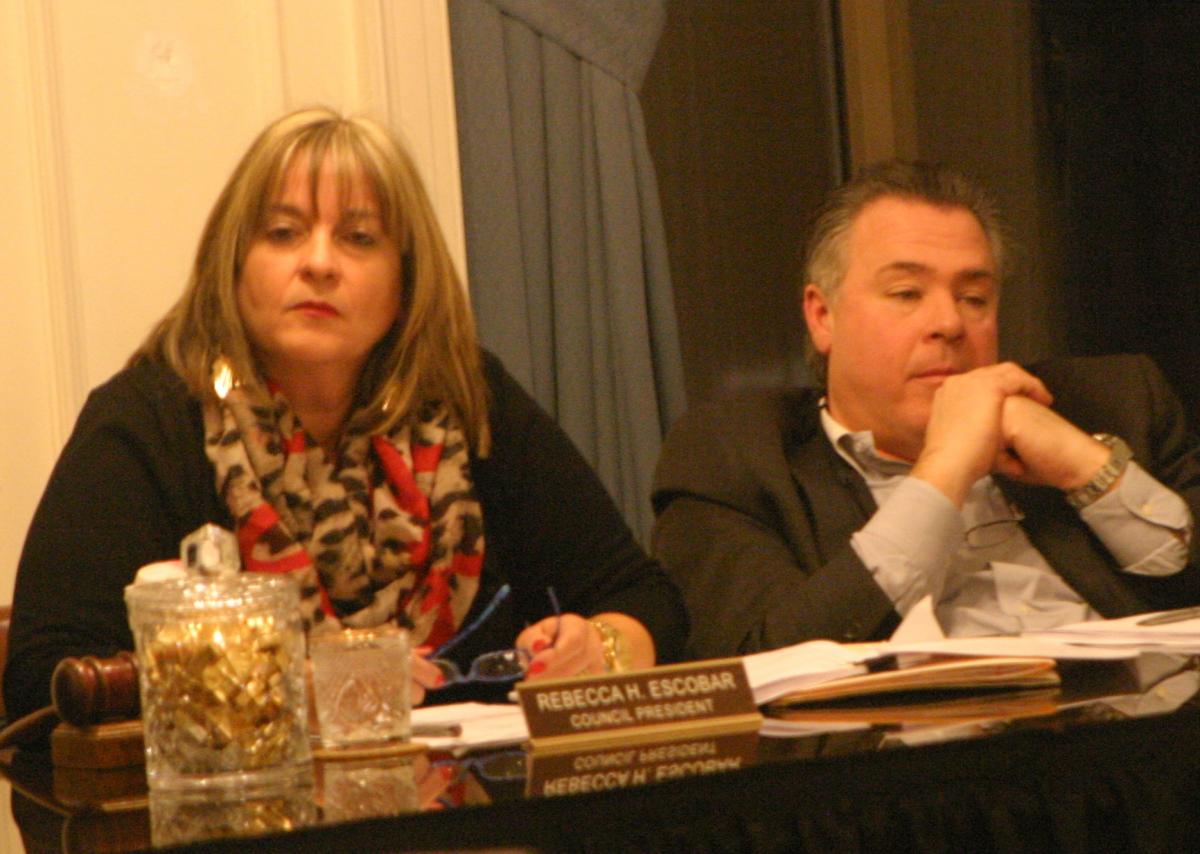 On September 7, 2011, in a strange meeting held in a different venue due to a roof leak at City Hall, the Council finally held the hearing on Blatterfein's purchase of the Sapporo liquor license.

There, City Council running mates were pitted against one another in the vote on the liquor license.

Kevin Egan voted against the application and testified for the city at the six-day trial held in Trenton recently.

However, Rebecca Escobar, who is currently running with Egan for re-election to their second term on Council, voted the other way

The city's political machine was out in full force attempting to quash the approval of the place-to-place liquor license transfer that night. 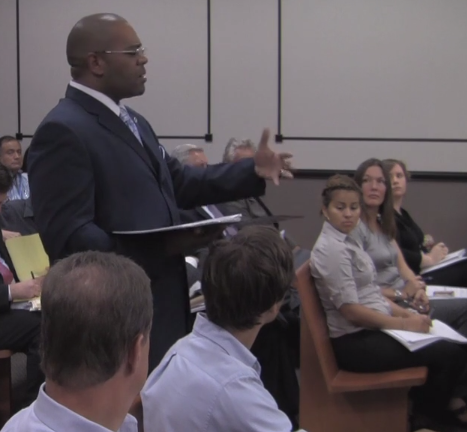 "This isn't about the Mayor hating the Yankees or not approving of this," Fleming said.  "This is about young kids who have to go past this everyday. I have young impressionable kids… and we have to explain this to them."

Fleming said an establishment with such a name would be "OK if we were on Route 35 somewhere where you had all kinds of establishments like that in the area."  But not in his neighborhood.

Council President Recine, who has since left office, is also a resident of the Rutgers Village neighborhood and also strongly opposed the bar.

"This place is going to serve alcohol. It's primary function is alcohol. I have a problem with that," said then-Council President Robert Recine.

"I've lived there my entire life and I know what goes on," said Recine, a Tunsion Road resident who characterized Bennigan's as more of a family restaurant that was less likely to cause problems for the surrounding residents.

"In my good consience for people in that area… I just think it's the wrong use.  Taking Bennigan's and making it this sport bar where the primary function is to serve alcohol, I think it's wrong."

Clarkin asked Recine to recuse himself from the vote on the liquor license transfer based on his "personal involvement in the application."

Only three of the five members of the Council were present, and every vote mattered.  With Rebecca Escobar the lone dissenter, Recine and Councilman Kevin Egan voted to deny the application 2-1.

After the hearing, a skeleton crew voted 2-1 to deny the liquor license transfer necessary for Buck Foston's to move forward. The plan would have called for an occupancy of 352, down from an original request for 393.

Nearly three years later, the Bennigan's remains abandoned, Bray and Recine are no longer with the city, Fleming has since been appointed and elected to City Council, and Egan and Escobar are seeking re-election.