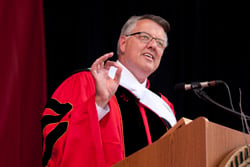 Under Pressure, Condoleezza Rice Backs Out of Rutgers Graduation Speech

Rice said she was did not want the "distraction" to take away from the commencement ceremony in Piscataway.

"Commencement should be a time of joyous celebration for the graduates and their families. Rutgers' invitation to me to speak has become a distraction for the university community at this very special time."

"As a Professor for thirty years at Stanford University and as it's former Provost and Chief academic officer, I understand and embrace the purpose of the commencement ceremony and I am simply unwilling to detract from it in any way."

On Monday, nearly 50 students occupied the Old Queens administration building in New Brunswick, home of President Robert Barchi's office.  But Barchi was nowhere to be found.

"We visited you on Monday and got no response.  [You] denied us access to the bathroom and threatened us with suspension and arrest," the protesters said in unison, according to the Daily Targum.

"Now we’re here for those answers."

Barchi ultimately passed the buck to his bosses, the Board of Governors: "I do not have the authority to rescind that invitation," he told the Senate and protestors, according to Daily Targum's Lin Lan and Lidia De Los Santos.

The controversy first erupted in February, when the Board of Governors swiftly approved Rice's nomination for an honorary degree and announced she would be the commencement speaker, a position that comes with a $35,000 honorarium and an honorary doctorate of laws degree.

"The process for selecting Secretary Rice as the commencement speaker for the 2014 Rutgers University Commencement and as the recipient of an honorary degree followed procedures that have been in place for a decade or more," said university spokesman Greg Trevor on Friday.

But typically, recommendations are solicited throughout the year from faculty members, while Rice's selection took most faculty members by surprise causing an uproar that led to a decisive vote against her by the Rutgers Faculty Council, as we reported.

In fact Rice's invitation likely would have come even sooner had it not been for another controvery involving someone named Rice, after a video surfaced of the school's basketball coach abusing his players.

"Given recent events I think we should hold off on sending [the speaker offer letter] for a while," wrote University Secretary Leslie Fehrenbach on April 4, 2013.

"[Rice] is good friends with Greg Brown so he gets all the credit for securing her to us," wrote Fehrenbach.

But Derrick learned of Rice's selection from Fehrenbach, months after Rice had been invited and selected.

"Our speaker is Condoleezza Rice!  But please don't tell anyone," wrote Fehrenbach in the November 5 email to Derrick.  "We won't release her name until February or April."

McGary was replaced by Medical School Chancellor Brian Strom in this year's honorary degree committe, which had a limited role because two of the three honorary degrees were already spoken for, Rice's and that of Gerald Harvey.

"Gerry Harvey will receive an [honorary degree] as the outgoing [Board of Governors] chair," wrote Fehrenbach "Since Bob [Barchi ] has agreed to 3 HD recipients, that leaves one more to select."

"Further details about the commencement will be announced in the coming days," said Trevor.