By: Joel Salvino
In: Archive

NEW BRUNSWICK, NJ—Hundreds of protestors, demanding an end to sexual violence and harassment, marched through the streets of downtown New Brunswick in an annual tradition.

Take Back the Night protests first sprang up on college campuses in the 1970's, based on the idea that women should be able to go out at night without the fear of violence or harassment.

The excitement in the crowd was palpable last night as they group took to the streets chanting “Take back the night,” "No Means No!" and “Rape culture has got to go!”

The march began with a rally on Douglass Campus of Rutgers University and proceeded down George Street, and onto the College Avenue Campus.

The march then culminated in a “speak out” at the Tent State occupation of Voorhees Mall, Rutgers New Brunswick.

“It’s very impressive to see so many people here," said Ariana Blake, a students at Douglass Residential College at Rutgers.  "It’s heartening to see so many men, even the fraternity Alpha Kappa Lambda is represented.”

The speak out at Vorhees Mall included a recital of "Rape Poem to End All Rape Poems," by the Rutgers University Slam Team.

"I'm a senior citizen, I was in college back in the 1960's… and it sounds like things haven't changed, and that really disturbs me."

Police officials present at the rally were impressed with the attendance.  Officer Pitt from the Rutgers University Police Department told New Brunswick today that “the event went over well, had a great turn out, and looks like a big success with a lot of support.”

Organized by Kaila Boulware and the group WOAH (Woman Organizing Against Harassment), Take Back the Night focuses on community involvement as well as social activism.

Founded one year ago, WOAH has mounted a series of escalating actions, climaxing at the Take Back the Night rally .

One of their goals is to institute more transparency into the Rutgers hiring process, making it mandatory to vet potential professors for a history of sexual violence. 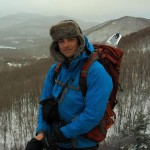