NEW BRUNSWICK, NJ—In front of a packed audience at City Hall’s Council Chambers, the Planning Board announced it would hold off on a controversial plan for a new Sixth Ward apartment complex in an effort to hear more testimony.

Their meeting went on for more than three hours Tuesday night, as the developer, experts, and opponents testified before the board on the proposed 57-unit apartment building, and a 43-space underground parking garage.

The site is currently home to the abandoned Rutgers University Catholic Center, consisting of two homes and a carriage house near College Avenue.  The Catholic Center moved to Somerset Street in 2010.

But, residents say the proposed building’s height and design would make for a distracting presence on the block, and fail to blend in with the surrounding two-story and two-and-a-half story homes in a harmonious fashion. 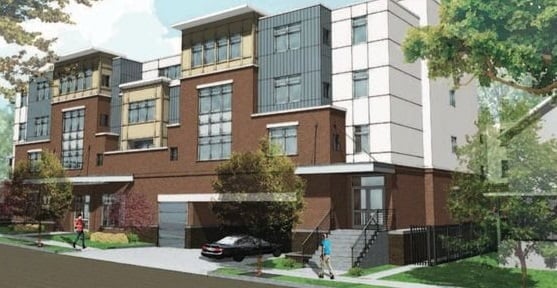 The building would be of a modernist or postmodernist style, in a blocky, awkward shape overshadowing the houses next to it, mostly Victorians or Colonials.

An apartment building of that scale would require 106 parking spaces, more than twice what the developer has proposed. The building also requires a variance to install an above-ground transformer near the sidewalk.

Under the relaxed standards of the recently-adopted College Avenue Redevelopment Plan, the new building barely meets a 40-foot height limit.

But, nevertheless, the historic nature of the Mine Street neighborhood could complicate development.

“The street does have historical significane in my thinking,” city historian George Dawson told the Planning Board during the hearing.

According to Dawson, the Heritage Studies Consultant Group of Princeton was hired in 1980 by Middlesex County to identify architecturally distinguished historic buildings. 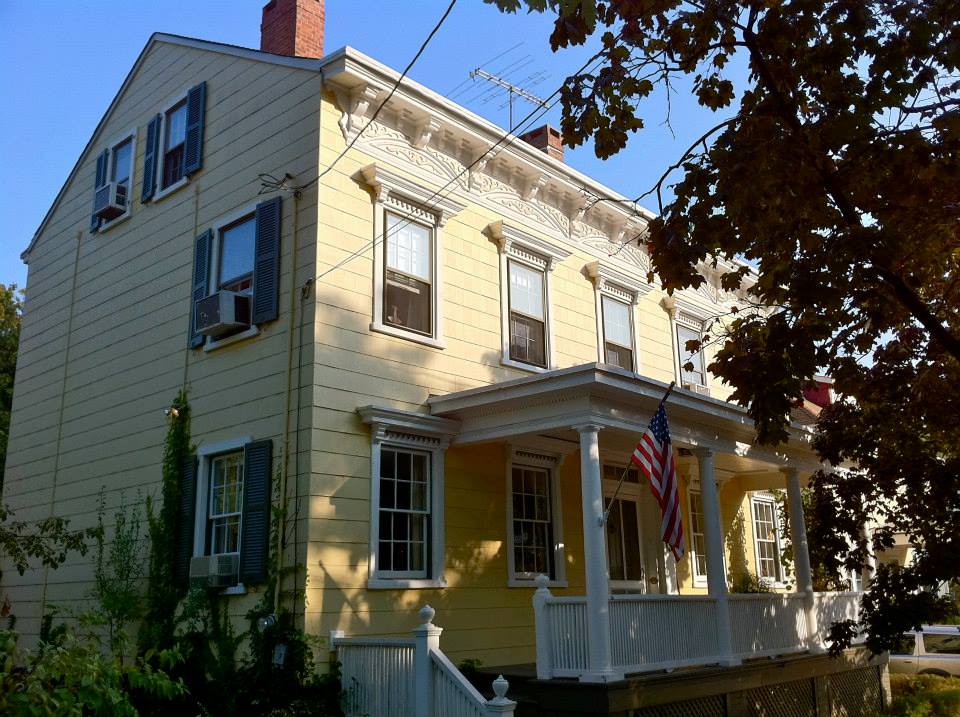 The resulting list identified five such buildings on Mine Street, which could pose an issue for anyone wishing to build in the vicinity.

One of those structures, 13 Mine Street, was identified as a farmhouse built between 1760 and 1780.

The home is now owned by retired Rutgers professor David Drinkwater and would be just two doors down from the new building if approved.

While a parking variance was the reason for the hearing, neighbors spoke out about not only the amount of parking (too little, according to the critics), but also the overall size and style of the building, and the shadows that it would cast on neighboring properties.

One vocal opponent of the project, Jennifer O’Neill, took the unusual step of hiring an attorney to represent her interests in the hearing.

O’Neill’s house would be immediately next-door to the 57-unit building’s parking garage entrance. 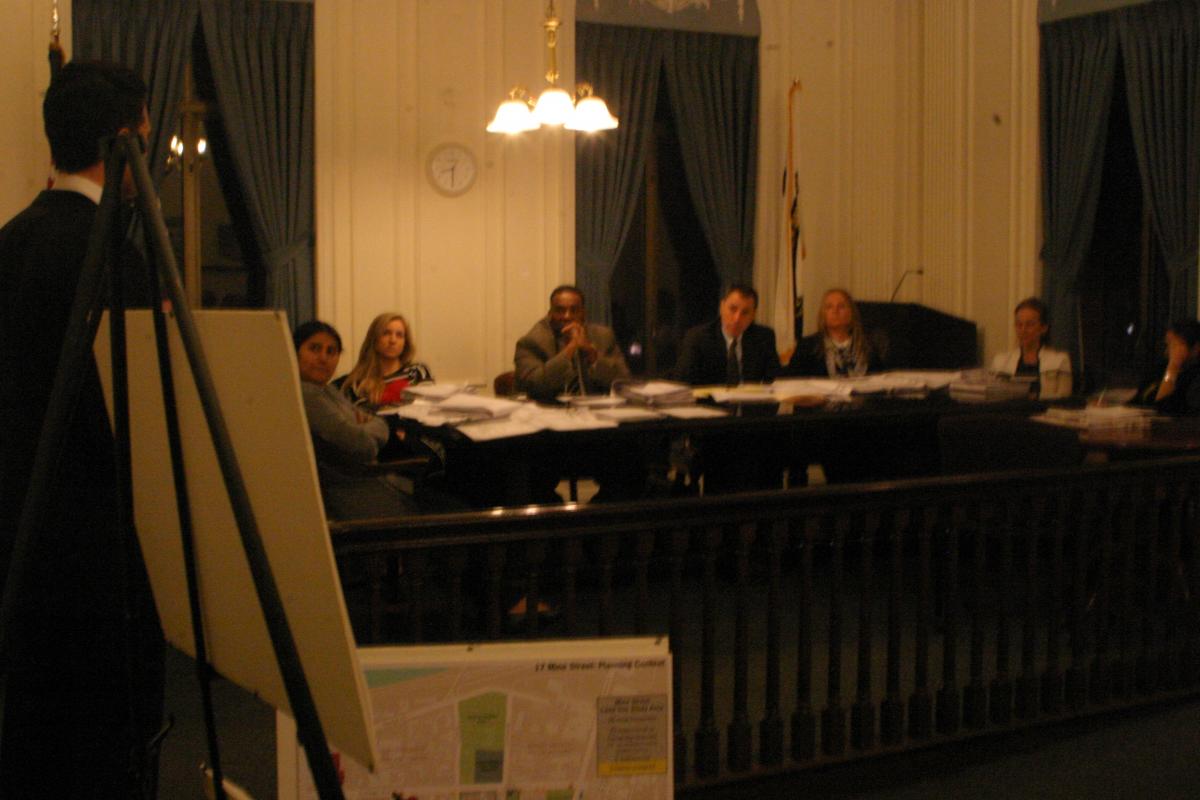 Because not all of the members of the public who wished to speak were able to before 10:30pm, Planning Board Chair Susan Sicora-Ludwig decided to put the application on hold for a month.

The hearing will continue April 8 at 7:30pm on the top floor of City Hall in New Brunswick.

Absent at Tuesday’s hearing were representatives of Rutgers University, and current landowner the New Brunswick Development Corporation, as well as the New Brunswick Theological Seminary, a potential partner in the deal.

Bernard Reilly, the attorney for O’Neill, questioned the supposed arrangement between the 225-year-old seminary and the developer.

Under questioning, developer Mitch Broder said there was no written contract between his company and the seminary, but confirmed that they were in discussions about renting ten first-floor units, which would have a separate entrance to the Seminary’s students.

Much of the cross-examination from O’Neill’s attorney Bernard Reilly focused on the plan’s guidelines that new construction should be “harmonious” with the surroundings.

“I can’t tell you a 4-story building is going to feel like a 2-story home,” said the building’s architect, who defended the design.

He testified that it was not a problem to have different architectural styles right next to one another, “as long as they’re not clashing types of styles.” 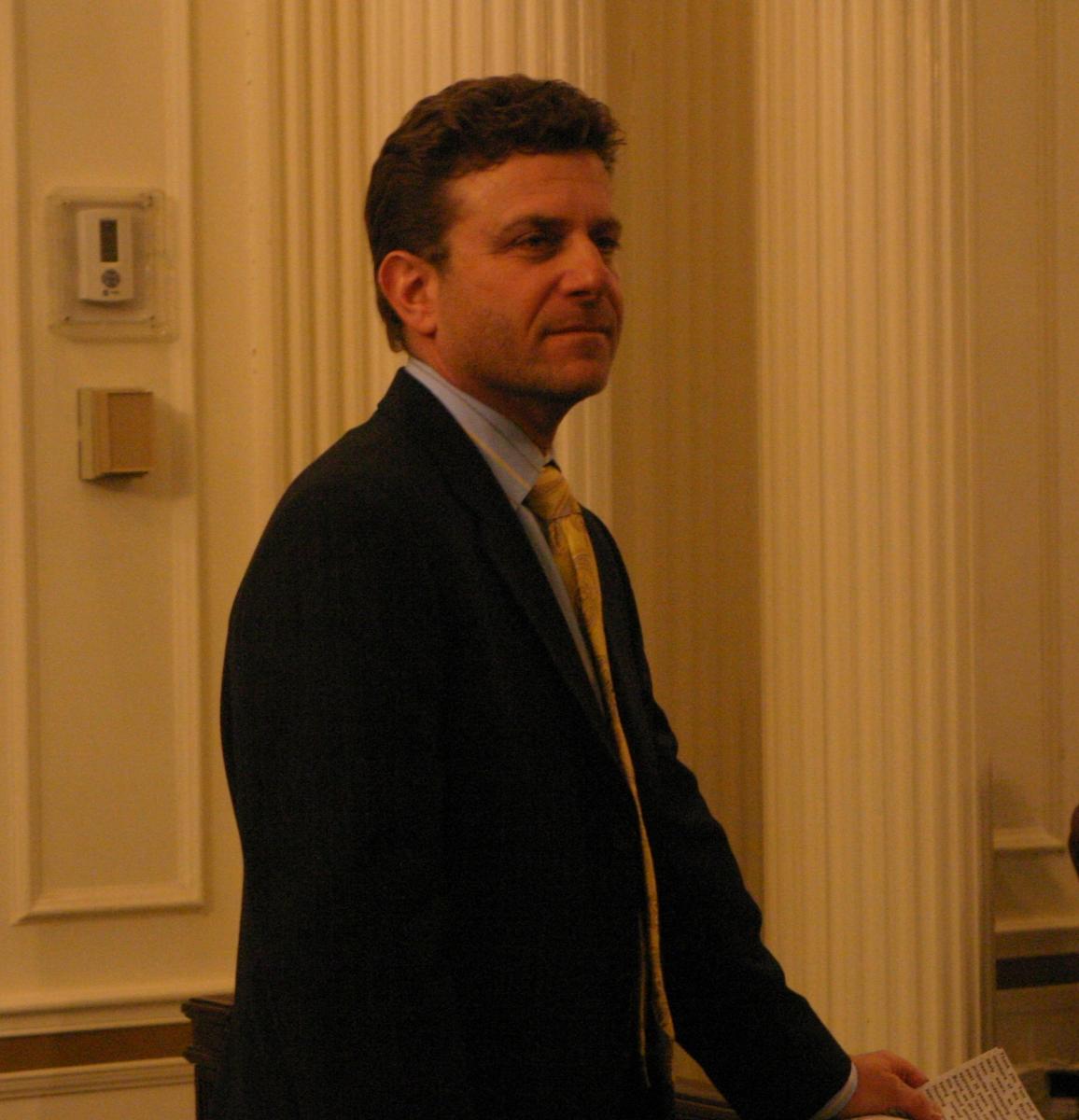 Broder, whose companies go by many names including Premier Properties, Construction Management Associates, and Raritan Valley Property Management, rattled off the addresses of nearly twenty buildings in the city his company has been approved for over the past two decades.

“Contrary to some opinions, we don’t destroy neighborhoods,” declared Broder, whose firm has donated to the re-election fund of Mayor Jim Cahill and to causes like Cahill’s unsuccessful effort to keep the school board unelected.

In an ethically questionable arrangement, Broder’s attorney is the same as the county government’s: Thomas Kelso.

Kelso is a private city-based attorney who earns a $165,704 annual salary from the county and also represents all of its biggest developers.  Kelso also serves as Executive Director for the New Brunswick Democratic Organization.

Four expert witnesses hired by Construction Management emphasized the plans called for significant improvements to the municipal water system and help meet the student housing need in the area.

Broder said that, if this one is anything like Contruction Management Associates’ other new buildings in the neighborhood, it will be occupied mostly by undergraduates.

“All of the other locations near the campus it’s at least 90-95% students,” he said.

But anyone will be allowed to rent there who meets the company’s qualifications which include either income verification, proof of employment, or a parental guarantee.

According to testimony from Broder’s planner, the two-block street consists of 29 total properties: 23 institional uses, including privately-rented housing geared towards students, 3 commercial use properties, and 3 owner-occupied properties.

Parking, especially, was a sore spot for residents, who claimed the block was already plagued with a lack of parking.  About 72% of New Jersey workers drive themselves to work, according to the 2012 American Community Survey.

Because of the close proximity to campus, the experts argued the building would need much less parking than required by the zoning law. The proposal includes a indoor bike rack that holds at least 20 bikes. Other tenants are expected to walk or use the Rutgers bus system.