NEW BRUNSWICK, NJ–The city appears to have given up on its battle to keep secret the official jurisdiction maps for the city’s two major police departments.

A spokesman for Mayor Jim Cahill had previously said this newspaper’s interest “in these maps does not outweigh the overall interests of the public to keep these maps confidential to protect the operations of the police departments and in turn the security and safety of our residents.”

But on Friday, City Clerk Daniel Torrisi handed over the 1996 and 2004 agreements between the Rutgers University and New Brunswick police departments, which appear to include the maps in question.

Though the 12 pages released do not show any changes to the RUPD’s jurisdiction since 2004, other documents independently obtained by New Brunswick Today confirm there were changes made on December 6, 2013.

According to the current map, Rutgers police are only allowed to pull motorists over or make DUI arrests within very tight boundaries near the College Avenue campus. 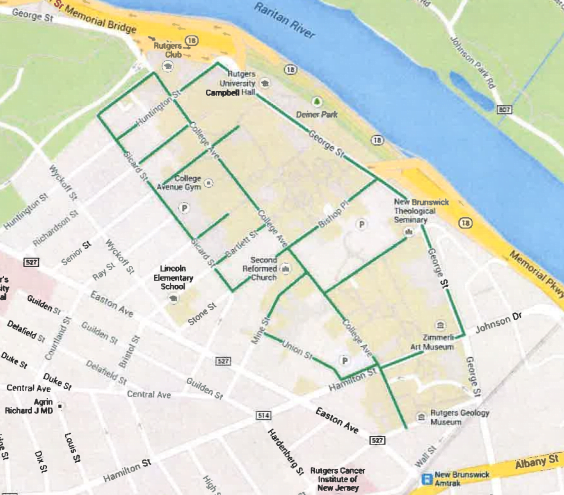 The RUPD’s areas of jurisdiction only include two blocks of Hamilton Street, a major thoroughfare in the off-campus student neighborhood.   There is no such jurisdiction for RUPD on Easton Avenue, the other main drag.

Lafayette, Sicard and Union Streets mark the westernmost boundaries of the College Avenue jurisdiction, and RUPD have no offcampus jurisdiction whatsoever near the Cook/Douglass campus.

Even some routes that cut through that campus are omitted from RUPD’s Title 39 jurisdiction, including George Street and Ryders Lane.

The maps are available below, along with the signed memorandums of understanding (MOU’s) between the departments.

“These are all the maps regarding the memorandums of understanding,” said Torrisi this morning, leaving the question open as to whether there are additional maps that a judge may order to be released after an April 10 court hearing on the matter.

“It would seem to be a foregone conclusion that New Brunswick no longer has any legitimate justification in withholding the maps we’ve requested – especially if they’ve already been produced as a result of this most recent OPRA request,” said Walter Luers, the attorney representing the author of this article in the records lawsuit.

On December 20, we broke the story that NBPD’s Police Director had cut back on the Title 39 authority granted to Rutgers Police in the city.

RUPD was essentially stripped of their powers to pull over vehicles, issue traffic tickets or make arrests for intoxicated driving outside of the campuses, with the exception of a few blocks immediately adjacent to College Avenue.

The author of this article also filed public records requests with Torrisi and Rutgers University asking for, “all maps depicting boundaries or zones used to guide the NBPD and Rutgers Police Department in their law enforcement duties since 2010.” 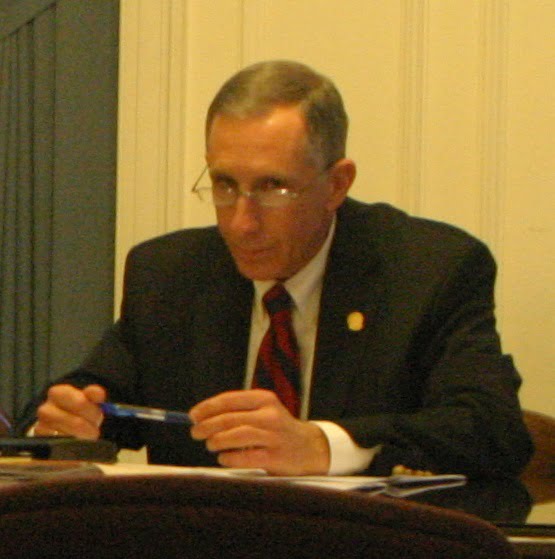 “Please be advised that your request is being denied pursuant to the exemption provision in NJSA 47:1A-1.1 which exempts the release of security measures and surveillance techniques which, if disclosed, would create a risk to the safety of persons, property, electronic data or software,” wrote Torrisi on January 7.

Three weeks later, after we attempted to obtain the records using a different legal strategy, Torrisi responded: “The maps for which you seek release are not being provided inasmuch as there is a greater public interest in maintaining the confidentiality of these maps when balanced against your interest in obtaining same.”

Rutgers ignored an identical request, and the author of this article filed a lawsuit against both the city and Rutgers on February 21.

In a bizarre statement issued on March 5, the Mayor’s Office claimed the release of the jurisdiction maps used by the Rutgers and New Brunswick police departments “could jeopardize [the] security of city residents.”

In the unusual press release, NBPD Director Anthony Caputo was quoted as saying, “[The author of this article]’s assertions in his political blog that the information withheld is somehow indicative of an adversarial relationship between the NBPD and RUPD are totally false.”

“Information disseminated to the public about what, where and when police personnel are deployed gives the criminal element access to information that undermines and jeopardizes the safety and security of those we serve to protect,” said Caputo.

New Brunswick Today’s investigation was sparked by rumors that, for an inappropriate reason, Caputo had cut back on the RUPD’s Title 39 jurisdiction, the areas where RUPD is able to pull over motorists and give them tickets.

Since then, documents obtained independently by New Brunswick Today indicate that changes were indeed made to the jurisdictional arrangement by Caputo in December.

“I have received notice from New Brunswick’s Police Director Anthony Caputo that effective midnight December 6, 2013 the boundaries of our Title 39 enforcement have been revised,” said a December 3 memo from RUPD Chief Kenneth Cop.

“In the end our Title 39 enforcement area is comparable to the existing 2004 version, although some areas immediately adjacent to campus have been added, while others have been removed.”

In fact, the boundaries in that memo remain exactly identical to the the 2004 version, raising questions about if and when the map changed between 2004 and 2013.