TRENTON, NJ–Delays and mishaps, even before the last month's first-ever New Jersey Super Bowl, have called into question whether NJ Transit (NJT) was truly ready to handle an event of such epic proportions.

Now, a legislative committee in Trenton will be investigating this and other perceived failure's of the state's mass transit system over the past several years.

The rail and bus service provider tried to prepare months in advance for Super Bowl 48, with such extra accomodations as midday service and the sale of a special week-long ticket called a"Super Pass."  The agency also ordered several trains to run a nonstop shuttle between Secaucus and Penn Station in Manhattan.

Last year, in the aftermath of Hurricane Sandy, NJTransit came under heavy criticism for moving a quarter of the agency's fleet of trains to floodprone areas in Northern New Jersey.

Governor Chris Christie refused to blame the agency's Executive Director James Weinstein for the damage, instead placing the blame on an unspecified lower level employee.

And now she will have to explain both of the recent debacles in Monday's Assembly Transportation Committee hearing, which will be broadcast live on the internet beginning at 10am. The Assembly Transporation committee is the same group that helped spark an investigation into the Christie administration's stunning effort to cause traffic problems in Fort Lee, near the foot of the George Washington Bridge.

That scandal has already cost two Port Authority employees and one of the Governor's staffers their jobs.

But now the committee will tackle the issue of transportation during Super Bowl 48, where crowds swelled and frustrations raged in response to long wait times on the Meadowlands train line.  The newest route on NJT's rail system, the line opened along with the construction of New Giants Stadium in 2009.

However, more than 27,000 fans came by train, widely exceeding the NJT's expectations and capacity.

Passengers, many dressed in anticipation of cold weather, complained of "sauna-like heat" in the lines at Secaucus Junction., a station where a bottleneck of riders needed to switch trains to locations along the Northeast Corridor including Manhattan. 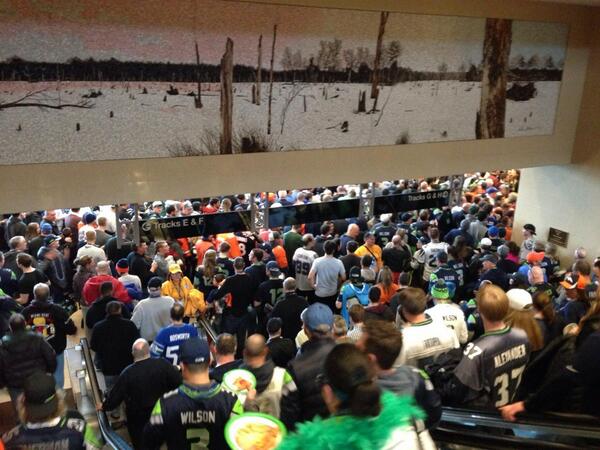 The station was deluged with 27,000 to 28,000 gameday riders, a record for one event, but it might have handled this crowd more easily had it not been for the National Football League's many security checkpoints, where people had to show their passes and their bags.

Four days before the big game, smoke was seen coming from a third rail in the East River tunnel, perhaps leading to electical problems.  On top of that, a train broke down in New York Penn Station's railyard.