“At this time the mayor is not in favor of doing that,” said Russell Marchetta, a spokesman for Mayor James Cahill, at the November 6 City Council meeting.

Council President Rebecca Escobar had previously said she would be inclined to support a paid sick leave policy, but that the city did not have an official position.

New Brunswick City Council members could not be reached for comment on the prospect of a paid sick leave policy.

In Newark, the City Council adopted paid sick leave by a unanimous vote of 6-0 on January 27.  It will become law if Interim Mayor Luis Quintana signs the bill as expected.

“Sponsoring this historic piece of legislation was the right thing to do for working families who will no longer have to choose between a paycheck and their health,” the bill’s sponsor Councilman Anibal Ramos told the Star-Ledger.

Newark would be following Jersey City’s lead, becoming the second municipality in the state to implement such a law.  The Jersey City law was passed in 2013 and took effect on January 24. 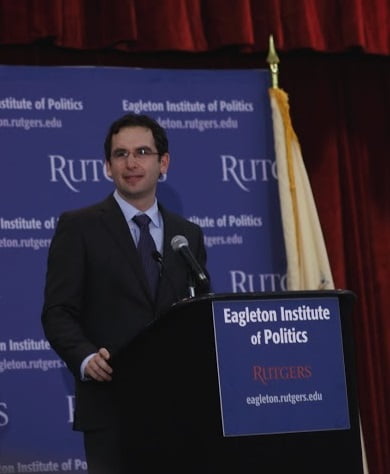 Jersey City’s Mayor Steven Fulop coincidentally gave a speech last night at the Douglass Campus Center in New Brunswick, where he was interrupted by applause after saying his city became the first in the state to implement a paid leave law this year.

In a press conference after the speech, Fulop said paid sick leave was a landmark achievement of his administration.

“I think it’s amongst the most important legislation that we’ve passed out of the gate and it’s probably going to be something we’re going to be proud of for the next twenty years,” he said.

The mayor said paid sick leave represented a leap of progress for Jersey City and its workers, and that former President Bill Clinton commended the town on its passage of the law during a recent visit.

Jersey City’s law requires all businesses in the city to provide one hour of sick leave for every thirty hours worked, up to forty hours, or five work days, per year.

A Rutgers study released last year stated that support for a compensated leave law is at 83 percent statewide, across all political affiliations.  The study, performed by the university’s Center for Women and Work (CWW), found that 37% of state residents are currently employed without any paid illness days.

“Over 50 percent of these workers cited concerns about financial affordability, job loss, or bad performance reviews as having an impact on their decision about taking time off from work to recover from illness,” Linda Houser, co-author of the report, said in a Rutgers news release.

“I think that the main point… is that the overwhelming majority of New Jersey residents across all political spectrums support paid sick days,” she said.

Willman-Cole said lack of access to paid leave is disproportional across ethnic and racial lines.  Most workers that would be effected by the law are black or latino.

“When asked about why folks can’t take time off, 38% responded that they couldn’t afford it,” she said. “That emphasizes the fact that paid sick leave is really important.”

Proponents of the measure say working families need the extra protection, while critics charge that the law will raise expenses, forcing small businesses to cut back hours and perhaps even reduce their number of employees.

Willman-Cole said she didn’t anticipate an additional burden being levied on small businesses, citing outside research.

But John Kabateck, executive director of the California chapter of National Federation of Independent Business, told NPR, “This will ultimately hurt the very people it aims to help — fewer benefits, fewer positions and people in the unemployment line.”

“The majority, if not all of our members… already provide some sort of a paid sick time off for their employees,” he said. “Our philosophy is, in the free market system, if you want to retain and keep good employees you’re basically going to provide these types of benefits and services.”

Russo questioned the wisdom of passing different versions of the bills across different municipalities.

“By doing it at a municipal level, each township issues their own ordinances and own requirements,” he said, “and that becomes more of a burden for our [human resources] people.”

But a study performed by the NJ Main Street Alliance (NJMSA), a coalition of 1200 small businesses, found that while implementing the law will cost the city of Newark around $8.5 million, the benefit to businesses through circumventing a loss in productivity and reduced turnover is estimated to be $12.7 million.

According to the report, an estimated $160 billion in annual productivity is lost due to sick employees coming in to work.  Paid sick leave, the report suggests, would alleviate that expense.

“To us, the benefits of sick days are pretty simple. When your employees are healthy they will be more productive and provide better customer service,” Mikali Harris, co-owner of the Sweet Retreat, a cupcake business in Newark said in an NJMSA press release.

A 2011 report by the Center for Economic and Policy Research (CEPR) concluded that in San Francisco, which has had a paid leave law in effect since 2006, businesses adjusted to the change without incident.

“Despite fears expressed by opponents of the program that [paid sick leave] would create a heavy burden on the state’s employers, our survey data suggest that they seem to have had little difficulty adjusting to it,” read the report.