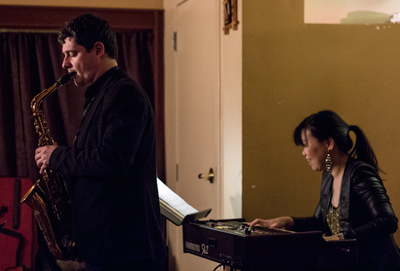 NEW BRUNSWICK, NJ—On a frigid night in New Brunswick, a faithful group of music lovers gathered at Makeda on George Street to hear the great Joe Magnarelli and his quartet play with enough fire to keep them warm.

Magnarelli is an established trumpeter renowned for his post-bop proficiency, and this show did not disappoint. On Herbie Hancock’s “Driftin,” Magnarelli opened the show with effortless flurries of notes and a brassy, cornet-like tone that brought a smile to my face.

Magnarelli also shone on his untitled original, a lovely little tune with a coy and playful form that he navigated deftly. In fact, his writing was on display all night, as his tune “Village,” featured some great dialogue between horns on the head, with challenging and engaging changes for the soloists to explore.

the young Russian saxophonist Dmitry Baevsky, who played a lovely take on the melody before a long improvised feature.

Afterwards, Magnarelli crafted an impromptu arrangement, proving that improvisation is not always about soloing, but also about working with the flow and form of tunes to make a performance more impactful.

In fact, Magnarelli led the band through both new and old material, presiding over the show with a nod here and a sign there, keeping tunes moving and sets engaging.

For their part, the rhythm section of organist Akiko  Tsuruga and drummer Victor Lewis were more than up to the challenge, laying a rhythmically diverse foundation for improvisational exposition. When it came time for Tsuruga’s own solos, she was particularly adept at spurring Lewis, pushing his buttons and making the organ solos some of the most exciting of the night. 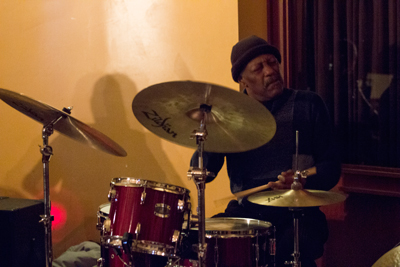 Victor Lewis is a monster, a legend who has contributed significantly to jazz history over the past few decades.

There are drummers with better technique, and some with more ‘advanced’ things to play, but I don’t know if a drummer exists with better ears. He was active throughout the performance, filling in spaces left by soloists with flourishes and crashes, and adding an unpredictable element that kept the music surprising and held the audience in rapt attention.

Overall, this show was a testament to the musicianship of these players, who were able to communicate on the bandstand and put across a very enjoyable performance. I would highly recommend the group, and especially urge readers to see drummer Victor Lewis at their next opportunity; he is truly a treat to watch live. 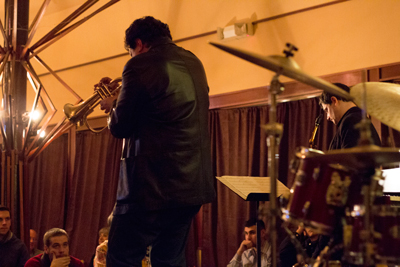 For a schedule of Makeda’s Thursday Night Jazz and other shows, visit the New Brunswick Jazz Project’s website at NBJP.org