NEW BRUNSWICK, NJ–There was a moment during Lee Hogans’ New Brunswick Jazz Project performance at Makeda where the power of the performance really struck the audience.

As the music was at its most complicated, the tempo and time signature most obscured, a gentleman in the audience felt compelled to get up and start dancing in front of the stage. Jazz was first a dance music, and when firing on all cylinders, Hogans’ band was energetic enough to make the entire audience feel the groove.

The show opened with a pair of Wayne Shorter compositions, the swinging “Lester Left Town” from the Art Blakey years, and “Madness,” a deeper cut from Miles Davis’ “Nefertiti.” The latter featured an excellent solo by Hogans, whose brassy tone and angular rhythmic approach kicked the band into high gear.

Continuing on the Davis theme, the tempo slowed with a rendition of “Blue in Green.” This showcased a beautiful solo by alto saxophonist Andrew Gutauskas, who took several choruses to creatively navigate the tune, expounding on some striking melodic themes.

I was extremely impressed with the rhythm section’s performance as a unit throughout the first set. During several of pianist Jim Ridl’s solos, it felt as if he and drummer Jerome Jennings were finishing one another’s sentences.

Bassist Tom DiCarlo was instrumental as well, as he laid the foundation for some rhythmic exploration between the two that kept the audience on its toes throughout the night. 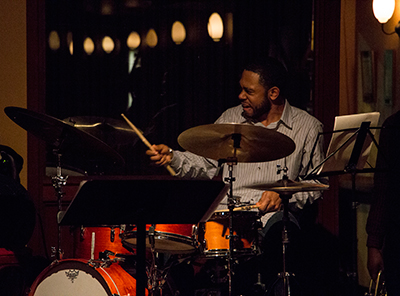 Another highlight came in the second set during one of Hogans’ originals, “Wishful Thinking.” A sort of shuffle march, this song spurred soloists with a stop-time section, leading to some excellent blowing by both horn players and Ridl.

The real fun started, however, when the band cut out for Jennings’ feature, where he referenced the stop-time figure continuously while building up to an explosive and surprisingly melodic drum solo that brought the house down.

As the night progressed, the band got tighter and tighter, pushing one another to more and more interesting musical places. This was a highly enjoyable show, and I would recommend that you see Lee Hogans’ group next time they are in town. 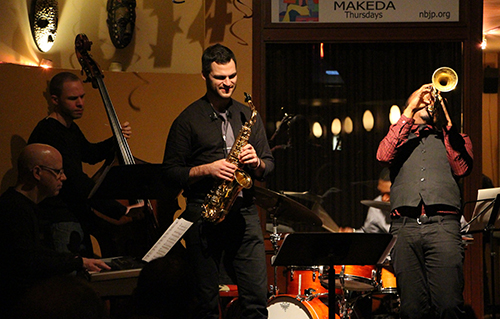 For a schedule of Makeda’s Thursday Night Jazz and other shows in town, visit the New Brunswick Jazz Project’s website at NBJP.org