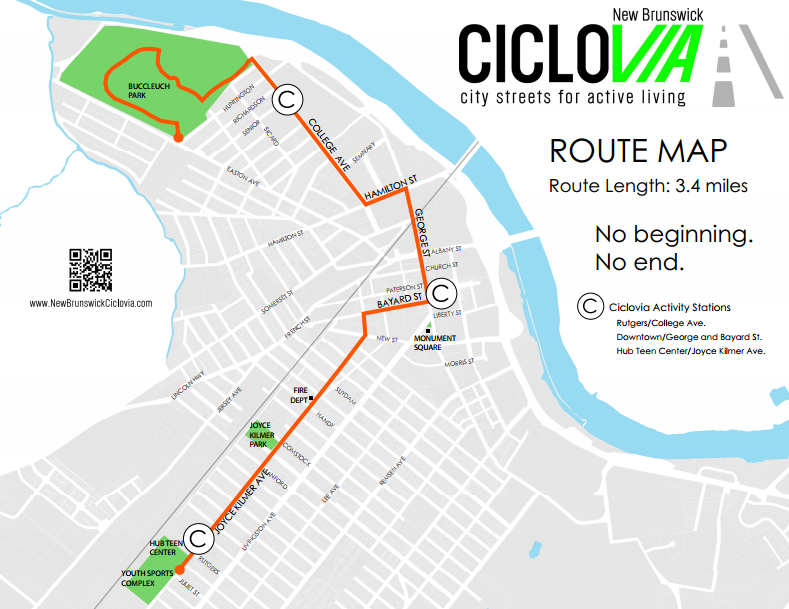 NEW BRUNSWICK, NJ—A bicycling festival held in many cities across the world known as Ciclovia wheeled its way into the Hub City for the first time on October 6, thanks to the support of seven sponsors who spent a total of $83,780.

Locals enjoyed the cloudy but pleasant day, playing sports and doing physical activities in the streets.  Kids and adults found themselves walking, running, and playing in the street as well as riding bikes, scooters, skates and other non-motorized transportation.

Flocks of bicyclists rode up and down Joyce Kilmer Avenue, joined by families and children, wheeling across or around the street. Some kids, and at least one or two cops, played sports, including kickball and football.  At least one group of people sat down in the middle of George Street.

A large stretch of Joyce Kilmer Avenue, along with sections of George Street, Hamilton Street, and College Avenue rounded out the course, with endpoints at Buccleuch Park and the Hub Teen Center.

A variety of unique bicycles could be seen, including a "bicycle built for two" that was driven partly by hand and partly by foot, recumbent bicycles, folding bicycles, bicycles pulling trailers behind them, and bicycles with baby seats on their front handlebars.

The Teen Center featured dances and drumming, while a cardboard obstacle course built by students at the Greater Brunswick Charter School, complete with a cardboard "bike wash" and a cardboard spaceship.

An activity station erected at the intersection of George and Bayard Streets including African music, as well as a traditional performance by dancers dressed in Dutch costumes.  In the same area, an unmanned aerial vehicle known as a quadricopter flew overhead, recording video of the event from above.

The Center for Latino Arts and Culture held dances throughout the day in front of their College Avenue location. Those dances hailed from various Spanish-speaking countries.

Tables, dressed up colorfully in the myriad hues of Central and South America, ringed the tent where the dances were held; the audience watched them from a small makeshift auditorium, also in the tent.

Representatives of the New Brunswick Bike Exchange pumped tires, checked bikes, and tested kids for helmets at the corner of Joyce Kilmer Avenue and Delevan Street.

Aside from a $2,500 donation from New Brunswick City Market, officials say taxpayer dollars were not spent on the event.

Vega said, "It is important to state that some of the costs of doing Ciclovia were one-time, so future Ciclovias will incur less costs."

More than $25,000, or 30% of the total budget, went towards on a lecture and reception held on October 4, two days before the actual event that featured remarks from Rutgers University professor John Pucher and Guillermo Penalosa, the founder of the Ciclovia movement.

Ciclovia means "bikeway" in Spanish.  During the event, held every Sunday in Colombia's capital city, streets are closed to cars and turned into a temporary bicycle and pedestrian path.

The first Ciclovia was held in Bogota, Colombia in 1976, with four routes.  There had been an earlier attempt at something similar in 1974.  The Bogota Ciclovia became a weekly event in 1982.

And New Brunswick's leaders say they want to hold another Ciclovia soon.  Vega told New Brunswick Today that the group who made the last event possible is meeting this month to discuss future dates.

Editor's Note: The author of this article was a volunteer for the event.