Hermann is no stranger to controversy.  She stepped into a volatile environment created after a player abuse scandal was covered up and exposed in the men’s basketball program. 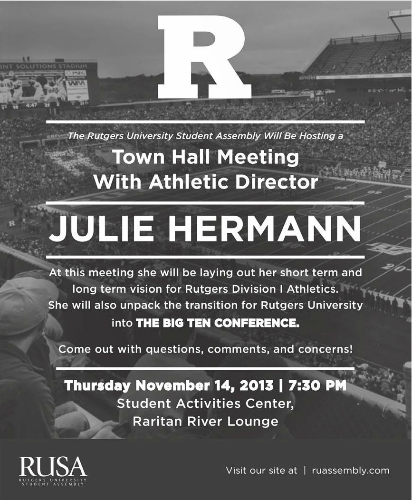 A Twitter account launched for the athletic director hasn’t been used since July 1 and has only tweeted six times despite having more than 1,000 followers.

Her much-hyped “Town Hall Meeting” was supposed to serve a similar function to her boss’ first appearance at student government, which we reported on.

Hermann’s Town Hall was advertised as a platform for Hermann to lay out “her short term and long term vision for Rutgers Division I Athletics,” and to “unpack” the school’s transition into the Big Ten athletic conference.

“I never said those words,” Hermann said. “No one should ever call a woman the ‘W-word.’  It’s so offensive to any woman. I’m not a name caller.”