NEW BRUNSWICK, NJ—A broad coalition of NJ DREAM Act supporters are celebrating the fact that they can now count the state’s governor among their ranks, but the victory announcement was not without incident.

In a bizarre scene that unfolded at a gala in a downtown hotel, city police arrested an activist for trespassing, seemingly at the request of the event’s organizers: the Latino Leadership Alliance of New Jersey (LLA-NJ).

Currently, undocumented students, many of whom immigrated at a young age and spent most of their lives in New Jersey, can be forced to pay the much higher out-of-state or international rates at the state’s public colleges.

Christie had previously spoke against DREAM Act legislation at the federal level and has previously been criticized by the Star-Ledger’s editorial board for his “indefensible position” on the hot-button issue.

The governor’s change of heart was announced last night at LLA-NJ’s annual gala, held at the Hyatt Regency Hotel.

According to a report in the Washington Times, Christie said at the event, “We need tuition equality for everyone in New Jersey.” 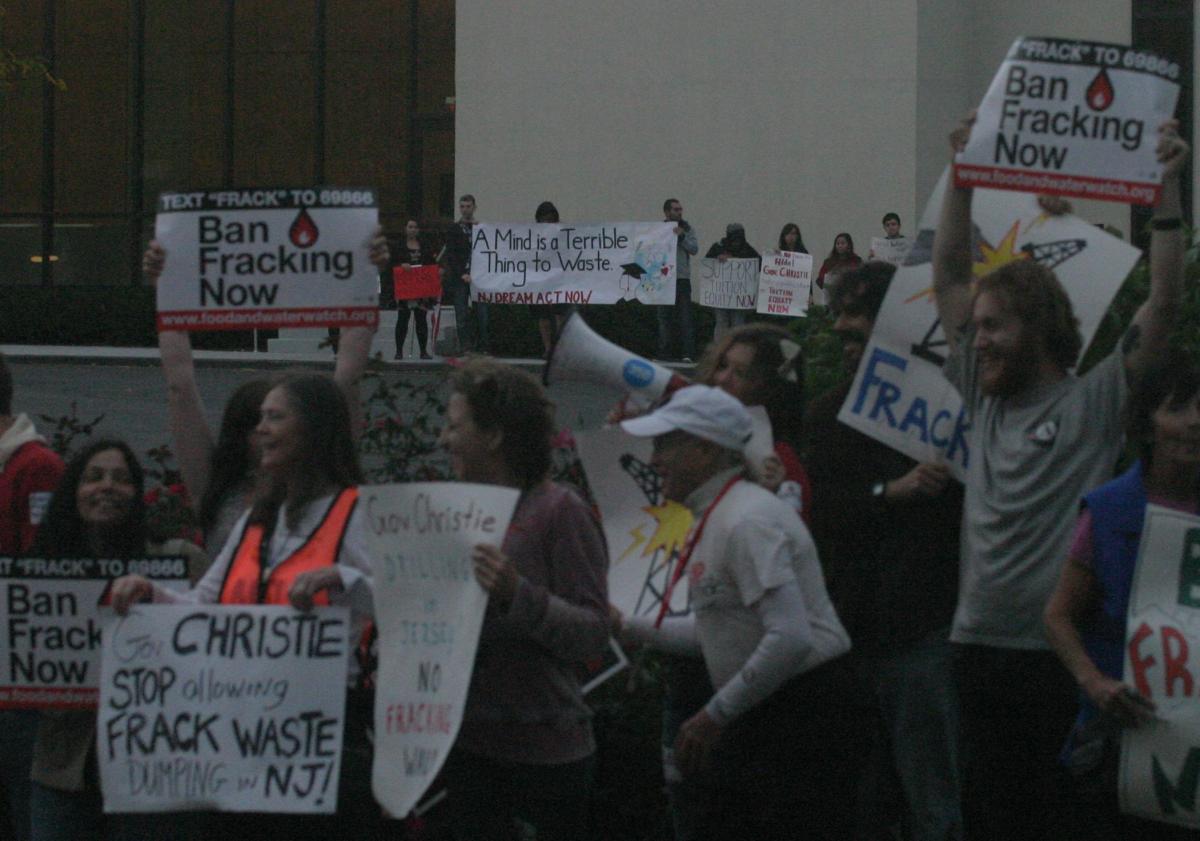 “The Latino Leadership Alliance saw our presence and they assumed that we were there to protest,” said Rojas, a Vineland resident.

Ironically, while Rojas sat in a jail cell, Christie used his keynote speech in front of the crowd of 300+ to finally express his support for the same policy that Rojas was advocating for: equal tuition for New Jersey’s thousands of undocumented students, including many who call New Brunswick home.

Rojas’ arrest has further deepened a divide within the movement at a critical juncture.

“An invited guest and NJ DREAM Act Coalition member was arrested under suspicion that he might question the Governor about his position on the bill,” confirmed a statement from NJ Tuition Equality for DREAMers (NJTED) released this morning. According to Rojas, LLA-NJ’s Patricia Bombelyn initially offered him a full refund to leave the gala.  When he declined, Rojas said Bombelyn returned with the Hyatt administration.

Hyatt staff allegedly told Rojas that the organizers of the event had “officially uninvited” him.

“They tried to refund my money,” Rojas said.  “I said ‘I really don’t want to get a refund and I was enjoying my time there.'”

“We were not trespassing,”  Rojas said today in a phone interview.  “We were all dressed up, ready to have a good time, listen to the Governor and see what he had to say about tuition equity.”

Three NJTED members paid a total of $450 admission to the gala, including Rojas.  They were all hoping for a chance to get Christie’s attention and ask him about the tuition issue, but also to hear what the state’s chief executive had to say.

“In a way, we were the ears of the youth inside the event.”

This morning, Martin Perez, the founder and leader of LLA-NJ, told New Brunswick Today: “I was not witnesss to the incident. I am trying to find out the details.”

Rojas was in jail for about an hour and said the NBPD officers were “extremely friendly, maybe even a little puzzled as to why I was being arrested.” 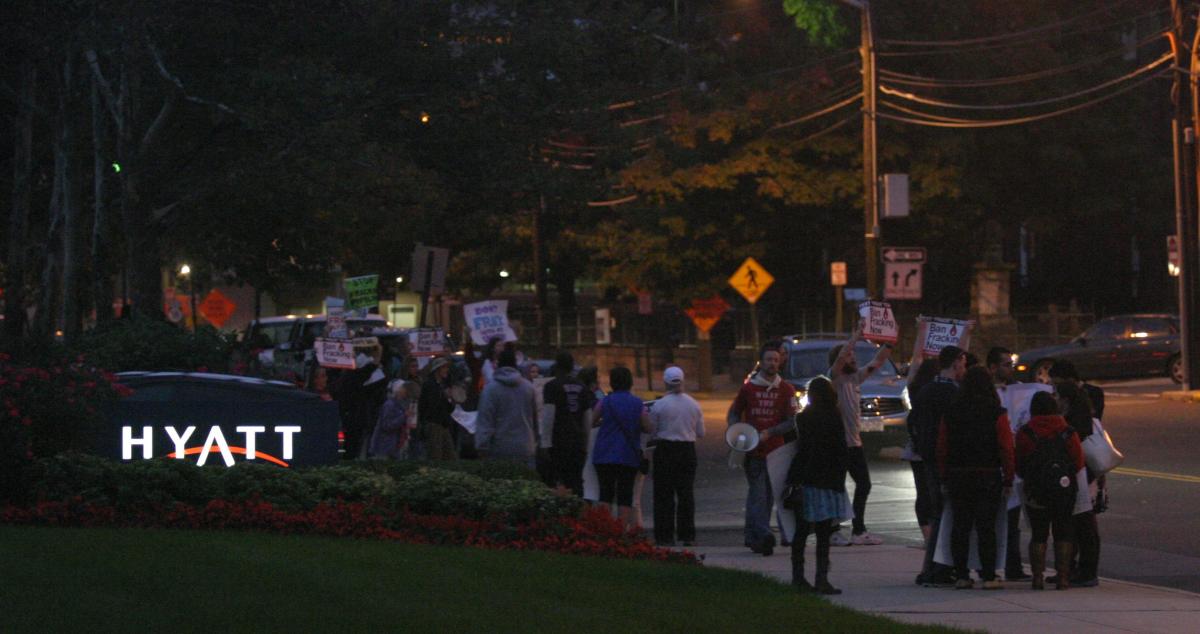 While the unpleasantness between Rojas and event organizers played out, two groups out front protesting the Governor’s positions on two very different issues spontaneously joined forces.

More than a dozen DREAM Act supporters affiliated with NJTED gathered outside the event, sporting signs and a banner that read, “A Mind is a Terrible Thing to Waste.”

Just a few feet away, an even larger group gathered to protest the Governor’s veto of a statewide ban on fracking, a dangerous type of gas drilling that New Brunswick’s City Council recently banned by a vote of 4-0. 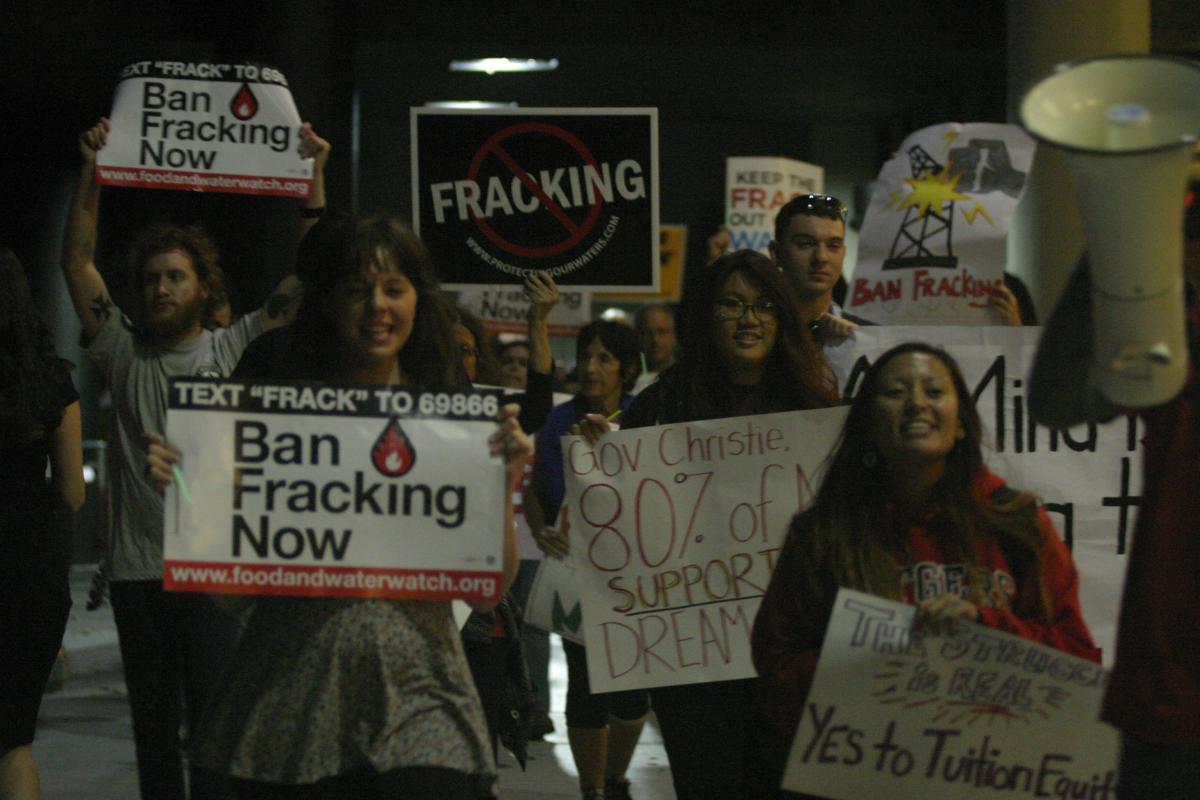 After more anti-fracking protestors arrived, and DREAM Act supporters were kicked off of Hyatt property, the two groups soon joined together, shouting each other’s chants through megaphones.

Chants of “Ban fracking now!” and “Support students now!” alternated back and forth as the newly-assembled group marched back towards the hotel’s entrance.

Rojas said that, regardless of last night’s debacle, the coalition is thrilled to hear the Governor pledge his support for their issue.

“We applaud the Governor,” Rojas said.  “We’re very excited that he had positive comments for… a law that will benefit thousands of undocumented students that grew up in this country.”

“He didn’t say he’s ready to sign it, but it’s by far the most positive statement that he has made in his four years as governor.”

According to the Washington Times, Christie told activists that he intends to get the bill passed and signed into law during the “lame duck” session of the legislature following the November 5 election. 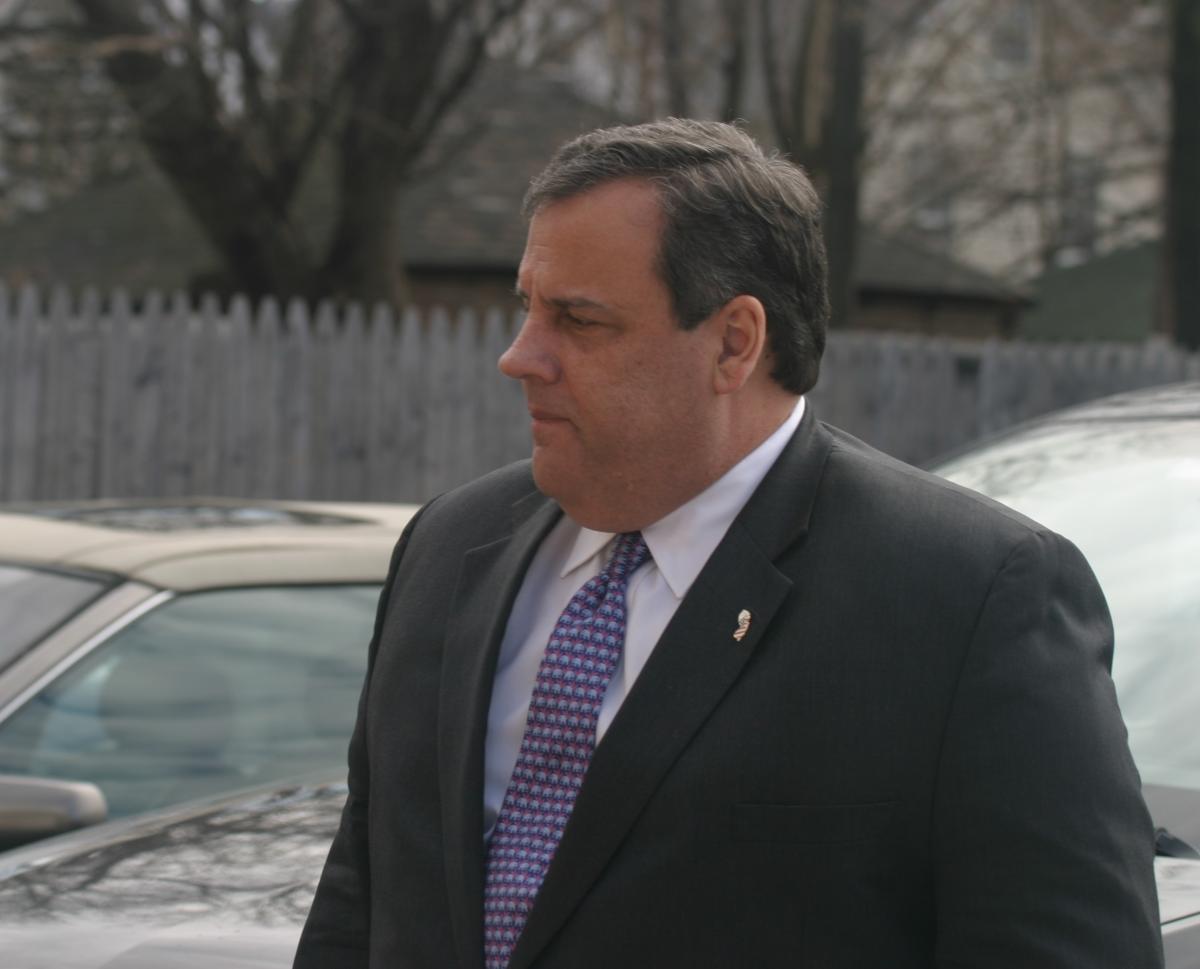 “About two weeks ago, [LLA-NJ] officially pulled out of the coalition because they felt like [NJTED]’s actions focused too much on the governor,” Rojas said.

“If anyone is making it a partisan issue, it’s the Latino Leadership Alliance for endorsing someone who had not pledged to support in-state tuition.”

Activists said that LLA-NJ had been privately assured the governor would support the cause for some time, but Saturday’s speech marked Christie’s first public pronouncement in favor of the issue. 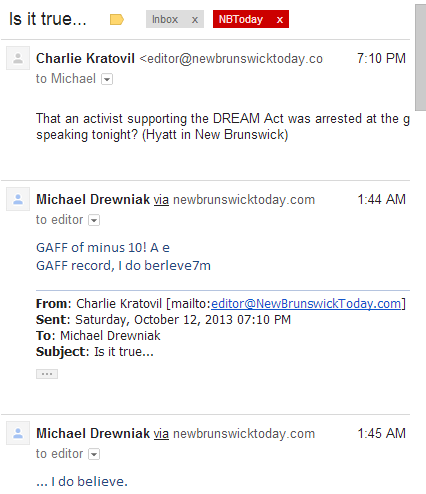 In an email that he says was intended for someone else, Christie’s spokesman Michael Drewniak accidentally sent the following to New Brunswick Today at 1:44 this morning, in response to a question about the arrest of Rojas: “GAFF of minus 10! A e GAFF record, I do berleve7m.”

Drewniak followed up with: “… I do believe,” one minute later.

Today, Drewniak apologized, claiming to know nothing about the arrest: “Sorry about that. Was something intended for someone else. And, no, I was not aware nor do I know if it’s true that a protester was arrested. That would be a local police matter.”

Editor’s Note: The editor and publisher of this newspaper have publicly supported in-state tuition for undocumented students and have also worked closely with the Latino Leadership Alliance of New Jersey in the past.