NEW BRUNSWICK, NJ—Matrix Development Group is currently building a new 550-space parking garage on a large surface parking lot, the first phase of an complex that is slated to include 393 residences, along with a pool and other luxury amenities.

Just across Neilsen Street are the Plaza Square Apartments, a similar 417-unit luxury complex that once offered the most expensive apartments in the city.  Plaza Square (formerly known as the Highlands) also has its own private parking garage with 650 spaces and 6,500 square feet of retail space on Neilsen Street.

The new eight-story apartment building is planned to be a roughly C-shaped building surrounding an open courtyard, and the site will be decorated with trees and other greenery.

The City Council approved a 30-year tax exemption for the Matrix development at their April 3 meeting, meaning the property owners won't contribute to the city's school district via property taxes for three decades.

Instead of paying regular taxes, the building's owners will give the city an annual payment in lieu of taxes (PILOT) for the next thirty years, starting at $825,000 and increasing by 2% each year.  According to Planning Director Glenn Patterson, that's nine times the approximately $91,257 currently paid in taxes for the existing surface parking lot.

But assuming tax rates rise at the same 2% rate, and the property is assessed at a similar value to its neighbor across the street, Matrix could save more than $21 million over the 30-year life of the abatement.  According to Patterson, the PILOT will start being collected as the apartments are rented.

And because the PILOT is given directly to the city, bypassing the city's school district, the school system stands to miss out on about $632,822 each and every year, or almost $19 million over the life of the abatement.

Asked about the impact of the new building on the school system by NewBrunswickToday.com, Patterson said, "The chance of many children living there is small.  Seventy percent of the households in New Brunswick do not have children under eighteen."

The luxury apartment building was the second such project to receive a tax abatement from the city government.  As we reported earlier this year, an abatement for Boraie Development's planned sixteen-story building on Somerset Street was also controversial.

The apartment building will be roughly C-shaped, surrounding an open courtyard, and the site will be decorated with trees and other greenery.  Patterson noted that the building would include combine two-bedroom, one-bedroom, and studio apartments.

Matrix owns several properties in Central New Jersey, as well as some in Pennsylvania and elsewhere.

The firm is based in southern Middlesex County, with offices in Monroe Township and Cranbury. The properties it owns include offices, apartment buildings, residential developments, warehouses, and even country clubs.

It also owns the office buildings on George Street, known as Plaza I and Plaza II, behind the site of the proposed development. 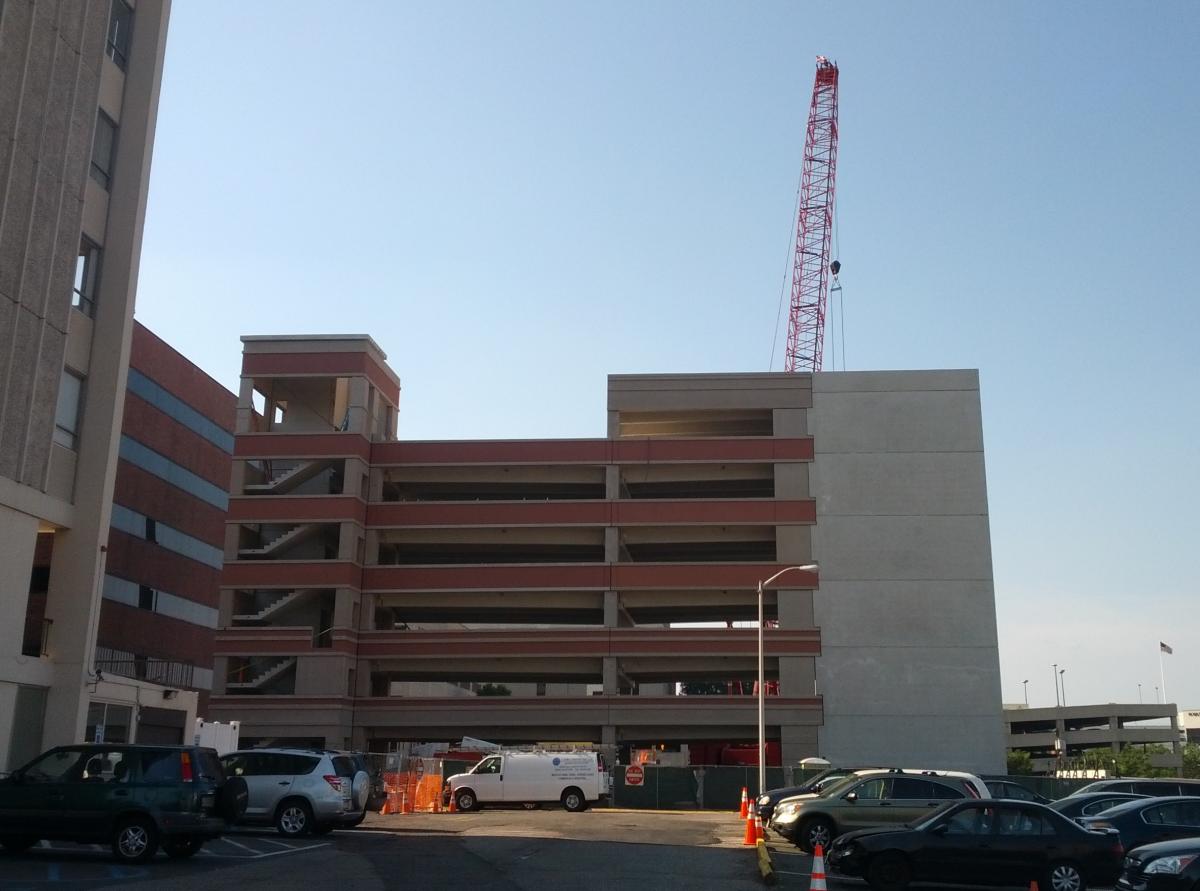 A May 28 press release from Matrix announcing the groundbreaking only hyped the parking garage portion of the project.

The press release characterizes the garage as an addition to the existing Plaza I & II office compound, and never refers to the apartment building explicitly.

Instead the release refers to the anticipated apartments vaguely as "future development."

But the housing portion of the project was the reason the city considered granting the abatement in the first place.

The City Council, according to the ordinance exempting Matrix from standard taxes, feels that the benefits the city gains from the new development will outweigh the potential costs.

The ordinance granting the exemption reads, "The city council… has determined that the development of the project will result in… housing space that will benefit the city and its residents when compared to the costs of the tax abatement."

The law also claims that "the abatement… is essential to the project which would not be feasible without the tax abatement."

If the building is assessed at a similar rate to its neighbor across the street, Plaza Square, and taxes remain stable over the next thirty years, the abatement could save Matrix more than $23 million in taxes according to New Brunswick Today's calculations.

Matrix CEO Russell Tepper did not respond to multiple requests for comment from New Brunswick Today.

Matrix had also requested $33,000,000 from the New Jersey Economic Development Agency in Urban Transit Hub Tax Credits, but was found technically ineligible for the award at the agency's April 9 meeting.

The company's project was assessed for tax credit eligibility, along with ten other developments (including another New Brunswick project).

All of the plans were graded for timeliness of the start of construction, the inclusion of mixed-use elements, and location in or near a census tract with low or moderate incomes.

However, the Matrix project's submission was disqualified from competition, as it did not meet the minimum qualifications to earn a score.  Matrix had failed to identify the sources of the funding and provide evidence that all of the funding and equity was committed.

Six other developments were disqualified. One of the four qualified projects, Harborside Unit A, was weeded out, because it had the lowest score and because it was the third submission from Jersey City.  Only two submissions from a single municipality could be funded under the rules set up by the EDA.

Of three projects that succeeded in winning the Urban Transit Hub Tax Credits, two were in Jersey City (Beacon Redevelopment and  Journal Square Associates), and the other was a plan for huge privatized housing and academic buildings on the Rutgers College Avenue campus.